Are You Easily Underwhelmed, Based on Your Personality Type 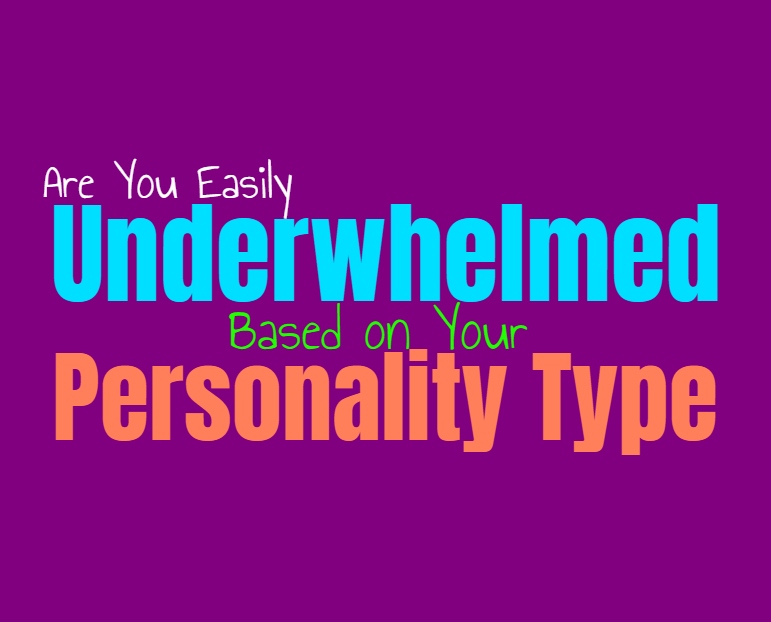 Are You Easily Underwhelmed, Based on Your Personality Type

Some people are just more commonly underwhelmed by things, and don’t easily find themselves impressed. For others it seems like they are rather easily to please and find themselves interested in many things. Here is how easily you find yourself underwhelmed, based on your personality type.

INFJs are often interested in many things, but they might find themselves underwhelmed fairly often. They can become disinterested in those things that don’t really fulfill their expectations and leave them feeling inspired afterwards. INFJs don’t want to seem like downers, but there are many things that just seem to leave them feeling underwhelmed and dissatisfied. They need to experience things they are passionate about and can personally connect with on a deeper level, or else the INFJ just feels a lack of excitement towards these experiences.

ENFJs try their best to remain positive, and don’t like having a negative outlook on things. They might behave as if they are excited about something, simply to make those around them happy. There are certainly times when the ENFJ is left feeling underwhelmed, especially by those things they are simply engaged in for the sake of someone else. They can actually be a bit picky about what they sincerely like and feel connected to, but they don’t want others to feel like they are being negative.

INFPs can be somewhat easy to please, and simply enjoy seeing people make an effort for them. They are passionate people who try to focus on the things that inspire them, instead of just doing something to please others or fit in. This does help the INFP become more excited about things, since they are diving into those experiences which they are more passionate about. INFPs believe in following their hearts and going after their inspirations, this often helps them feel connected to those things instead of constantly underwhelmed by them.

ENFPs try not to be negative about things and want to go after whatever inspires them most. They are bored somewhat easily though, and this can cause them to feel underwhelmed with things that just aren’t exciting enough. While ENFPs do find themselves easily underwhelmed, they try not to focus on this too much. They often want to move on to something more inspiring and fulfilling, instead of dwelling on the experience which was completely underwhelming for them.

ENTJs can be underwhelmed somewhat easily, especially by things which seem mundane or unintelligent. They enjoy experiences which challenge them and make them feel like they have accomplished something of value. ENTJs try their best to remain moving forward and don’t necessarily want to dwell on the things which underwhelm them. They do sometimes get caught up though, especially if they had their hopes up for something and find themselves completely disappointment by it.

INTPs do find themselves bored fairly easily, which does cause them to feel underwhelmed by a lot of things. They might be excited by something at first but ultimately find that they lose their connection and inspiration. INTPs often jump into new projects because of this, and have a hard time truly feeling excited and inspired about something for a long time. INTPs can become a bit bummed out by the fact that they are so easily underwhelmed, and want to find things which will inspire and fulfill them.

ENTPs might find themselves excited about something new, but they do tend to become underwhelmed by it after a while. This is what causes them to jump around from one thing to the next, mostly because they become bored after a short time. ENTPs don’t want to feel so easily underwhelmed by things, they simply want to find experiences which challenge them and continue to grow as they do. For the ENTP it is about discovering something which will keep pushing them and continues to inspire new ideas and actions.

ISTJs try to focus on getting things done and so they don’t find themselves underwhelmed constantly. They look to their own accomplishments and try to uphold their own expectations to the best of their ability. ISTJs can be underwhelmed with the efforts of others sometimes, simply because they value efficiency and sometimes people can fall short of this. ISTJs don’t need constant excitement though, and so this does help them feel satisfied with things more often than not.

ESTJs aren’t necessarily underwhelmed often, but they do sometimes feel this way with people who aren’t efficient or hardworking. ESTJs can lose their patience with these type of people, and are definitely underwhelmed by their behaviors and abilities. ESTJs try to focus more on getting things done themselves, and are often satisfied with their own performance. This is because they work hard until they get things right, instead of slacking and just accepting any result.

ISFJs try not to feel dissatisfied with things, instead they want to focus on the positive. They try hard to provide for their loved ones and often set rather high standards for themselves because of this. For the ISFJ it is often easier to please them than people might think, and so they aren’t constantly underwhelmed by things around them. ISFJs want to maintain peace and harmony in their environment, which means they don’t need constantly excitement to feel happy or comfortable.

ESFJs aren’t necessarily easily underwhelmed people, simply because they don’t expect all that much. They do however expect a lot from themselves, but they simply work hard to get things right the first time around instead of trying to fix it later on. ESFJs don’t like being underwhelmed by things and so they try to look towards a more positive approach. They do find themselves underwhelmed with certain things they are passionate about, or with things readapted from their past. Change can be both unsatisfying and underwhelming for the ESFJ, especially when it comes to things they hold important to them.

ISTPs do find themselves underwhelmed by a lot of experiences, mostly because they need real excitement to feel satisfied. ISTPs enjoy things which challenge them and help them to really work their minds more. For the ISTP a lot of things can feel underwhelming, or simply boring. They need more excitement and passion in their day to day lives, and so they find a lot experiences don’t really deliver to their expectations.

ESTPs try not to be underwhelmed by things, instead they just focus on moving on when something isn’t as thrilling as they’d hoped. ESTPs can be both overly excited and completely underwhelmed, but it depends on the experience. It isn’t necessarily true that they are easily underwhelmed, it depends on if they are personally connected to the subject or experience in front of them. ESTPs do find themselves curious about new things though, and can become bored with something that doesn’t challenge them in unique ways.

ISFPs don’t like feeling underwhelmed by things, but they often avoid this by sticking to what they are most passionate about. Instead of diving into things they know won’t be fulfilling, they follow their hearts in the right direction. For the ISFP it is easy to become bored by things they are forced into, and so they try their best to avoid this. They want to follow their own path towards inspiration and passion, so that they can avoid constantly feeling underwhelmed.

ESFPs don’t like feeling underwhelmed, but they try to keep a positive outlook. They can often find themselves excited about things, especially if they put enough thought and creativity into it. ESFPs try to look on the bright side of things, instead of constantly feeling disappointed in what is around them. They are positive people who want to make the most out of life, and try hard to keep this outlook on life. Because of this ESFPs can often be excited by just about anything, even if they feel the need to move on to something new rather quickly.