How Do You Blow Off Steam, Based on Your Personality Type 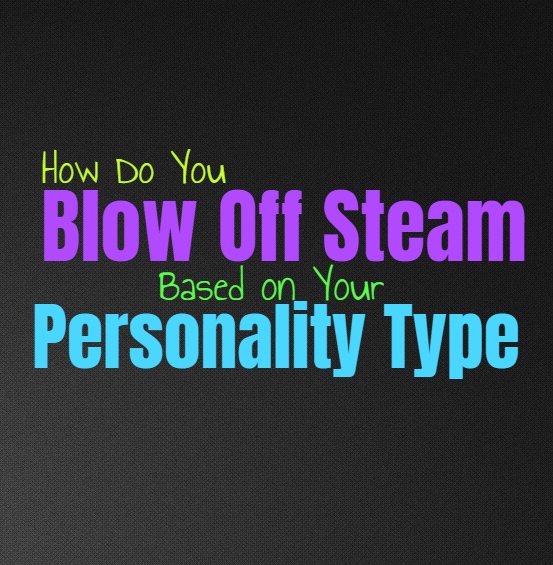 How Do You Blow Off Steam, Based on Your Personality Type

Everyone needs to blow off a little steam once in a while, especially if we have felt a bit stifled for a long time. Sometimes blowing off steam just means going out and having a few drinks with friends, other times it means venting and releasing all of these emotions which make us feel anxious. Here is how you blow off steam, based on your personality type.

INFJs often need to blow off steam by having plenty of time to themselves without feeling guilty about it. They need to do the things which really make them feel more energized, possibly reading or playing a video game. It also can be rewarding for them to blow off steam by venting a bit to someone who they trust and who understands them. Sometimes letting out these negative emotions which they keep inside can make the INFJ feel more relieved and relaxed about the situation. For them blowing off steam rarely involved going out for drinks, as this social setting can actually be more draining than anything else.

ENFJ
ENFJs often blow off steam by going out with the people they love and finding something fun to do. Being around their favorite people is a big part of this for the ENFJ, or else it can feel a bit pointless. Having someone they can blow off steam with by just doing something which thrills and entertains them, is going to be rewarding. ENFJs can be very hardworking and focused people, and so they do need to have time to do what they want without feeling guilty about it. For them going out and having a few drinks or just going dancing, can actually be a good way to blow off steam.

INFPs need to blow off steam in their own ways, but this often depends on why they are frustrated. If they feel overwhelmed and drained, then blowing off steam often needs to take place alone and without people interrupting them. This might mean just going for a long drive, or going to a new place they have never been before. In these situations the INFP needs to blow off steam but also recharge their batteries and social interaction does the opposite of this for them. In some instances they might want to blow off steam by venting to someone they love and trust, and just having them there to make it better.

For the ENFP to blow off some steam they need to shake things up and not feel stuck in the same position. They often have different means of doing this, but it needs to be something of their own choosing. While ENFPs are social people, sometimes they want to blow off steam on their own without people hovering around them. This might mean having some drinks and just going for a walk, or maybe working on a project which they enjoy doing. ENFPs do sometimes want to be around someone they love and trust so that they can vent and express their frustrations, but it often depends on why they need to blow off steam.

INTJs often need to blow off steam in their own ways, but this does sometimes include doing what others may not expect from them. INTJs who are feeling stressed and overwhelmed might enjoy going outside of their comfort zone, and possible focusing more on the physical world rather than their own internal reality. INTJs don’t often enjoy this type scenario, but when they need to blow off some steam it can actually be useful to them. They may need to get away for awhile after this, so that they can recharge from being around others. In some situations the INTJ just wants to blow off steam by ranting or venting about a topic which can help them really get out these frustrations.

ENTJs have different means of blowing off steam, but sometimes this means going out with their friends. Sometimes it means just going to the bar or club and having a few drinks to help them relax and forget about their stress. Other times the ENTJ might enjoy going for a long drive, just so that they can clear their head and not have too many distractions. ENTJs don’t like doing anything which makes them seel irresposible, but sometimes just venting can help them blow off steam.

INTPs often blow off steam in their own unique ways, but this is usually done on their own. They usually become drained if they have to be around others when they need to just let go of some of their negative feelings and blow off some steam. INTPs might want to go for a drive out of the blew, since this can help them to clear their minds. For them blowing off steam often means letting go of their stresses and even being a bit more spontaneous.

ENTPs have different ways in which they blow off steam, sometimes this actually means getting into a heated debate with someone. Having someone who can keep up with their ideas and arguments can help the ENTP let loose a bit and blow off steam. They also might enjoy jumping in the car and just driving somewhere new, since being spontaneous can help them blow off some steam. ENTPs also don’t mind going out with their friends and doing something fun, especially if this allows them to forget about their frustrations for a while.

ISTJs often need to blow off steam on their own, and need to feel some distance to do this. They sometimes feel overwhelmed by everyone needing something from them, since they work hard to provide for their family and loved ones. ISTJs might want to blow off steam by just having a few drinks and diving into their favorite guilty pleasure. Not having to deal with obligations for a short time and just being able to forget about these things, is all the ISTJ really needs to blow off steam.

ESTJs often need to blow off some steam by venting and letting out all of their built up frustrations. They are often perfectionists and so they put a lot of pressure on themselves to accomplish their tasks as efficiently as possible. When the ESTJ feels stressed they just need to let this out instead of bottling it up, and this often helps them to blow off a little steam and feel better about the situations when all is said and done.

ISFJs often need to blow off some steam on their own, without feeling guilty over this. They need some time to unwind and focus on the things which build them back up. They might need to dive into the hobbies they enjoy, maybe even have a few drinks to blow off steam. ISFJs sometimes need to let go off this stress and allow themselves to feel better. They don’t usually get time to themselves and this is often exactly what they need to recharge and even blow off some steam.

For the ESFJ to blow off steam they often need to vent and just let go of the things which are frustrating or upsetting them. They can often keep things bottled up because they don’t want to disappoint anyone or feel like a burden, but this can become overwhelming after a while. For the ESFJ to really blow off this steam, they need to let go of these things and find someone they can vent to who is willing to listen and be supportive of them.

ISTPs often have different ways of blowing off steam, but it really just means letting loose and not worrying about ramifications. ISTPs need to unwind and feel free to live in the moment without any obligations. In order to blow off steam they want to do something different from their usual activities, whether this means driving fast cars somewhere, going to the clubs and having some drinks, or just going for a drive to somewhere new.

ESFPs often blow off steam by going out with the people they care for and have a good time with. Whether this means going shopping and spending some money, or maybe having a few drinks and just chatting. ESFPs blow off steam in different ways, wanting to mix it up and just go with the flow of things. For them blowing off steam just means doing whatever they want in that moment, without allowing things to hold them back or make them feel guilty for it.