How Do You Handle Guilt Trips, Based on Your Personality Type 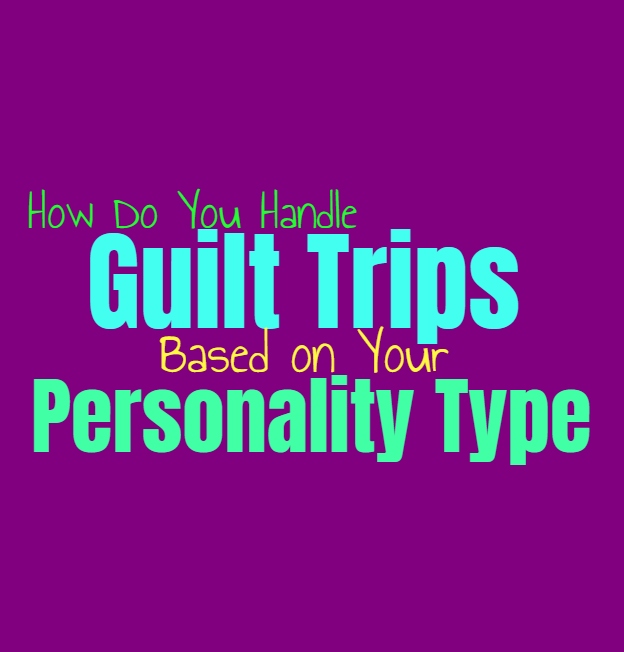 How Do You Handle Guilt Trips, Based on Your Personality Type

Some people dish out guilt trips for just about everything they do, and these types can be difficult to be around. While there are people who fall pressure to these guilt trips, there are others who are capable of ignoring this childish behavior completely. Here is how you respond to and handle guilt trips, based on your personality type.

INFJs can struggle with guilt trips, especially when it comes from the people they love. They have a hard time turning these people down and will be rather susceptible to their attempts at making them feel guilty. INFJs already experience enough internal guilt as it is, often coming from their own self-doubt and shame. They are hard on themselves and so having someone else put pressure on them as well can be truly difficult for the INFJ to shake. When their loved ones try and guilt trip them, the INFJ can struggle to really overcome this or recognize how to ignore it. This is simply because they care so much about those around them and want deeply to please them.

ENFJs definitely struggle with guilt trips, and have a hard time really ignoring them. When someone they care about tries to guilt them into something it is difficult for them ENFJ to turn them down. They want to make those around them happy and strive to be able to fulfill their needs. While ENFJs have their own goals and passions, it can be hard for them to prioritize themselves when someone else is making them feel sincerely guilty about something. Their sense of compassion and caring is exactly what makes it difficult for the ENFJ to overcome most guilt trips.

INFPs are often susceptible to guilt trips from the people they love, since they do care about pleasing them. At the same time INFPs do often reach a point where these incessant guilt trips will set off red flags and make them want to avoid this person and their constant negativity. When they recognize that someone is trying to manipulate them, the INFP really wants to get away from this type of behavior. They care about others and want to please them but it becomes deeply unsettling when they know that they are being used.

ENFPs really don’t appreciate when someone tries to guilt them into something, but it is possible for them to fall into it sometimes. When they truly care for someone the ENFP simply wants to maintain that connection and make this person happy. It isn’t always easy for them to know the perfect things to say or do, but they certainly put in a lot of effort and consideration. When the person they care for does try to guilt trip them, they might be hesitant at first but ultimately will not want to cause trouble in their relationship.

INTJs rarely find themselves falling into people’s guilt trips, since they are often aware of what they are doing. INTJs don’t really focus much on their inner emotions and prefer to focus on things they know they can rely on. They prefer to look at things from a logical and factual point of view, and so they can recognize when someone is simply trying to guilt them into doing something. INTJs help others when they personally want to, not because someone is trying to manipulate them into doing this.

ENTJs don’t really focus on people trying to guilt them or persuade them into doing things. They prefer to help others when they see fit, and of their own accord. ENTJs do care about providing for their loved ones though, and work hard to make sure they are cared for. They simply don’t believe in falling into the manipulation of others and so guilt trips don’t often work on them. It can be something they struggle with for someone they love deeply though, and might start to wear away at them if this person does it constantly.

INTPs can become very frustrated when someone tries to play guilt trip games on them, especially since they don’t like disappointing the people they care for. At the same time feeling this sense of guilt can make the INTP a bit angry, since they realize someone is trying to manipulate them. Feeling like someone they care for wants to guilt and deceive them in this way, can be truly upsetting for them INTP. They might find themselves rebelling against this at first, although the guilt might wear away at them after a while.

ENTPs really don’t appreciate when someone tries to manipulate them, and so they become truly frustrated by guilt trips. When someone they care for actively tries to guilt them into doing something, it leaves a truly bad taste in their mouth. This causes the ENTP to challenge their previous thoughts about this person, wondering why they would attempt to manipulate them in this way. They might find themselves rebelling against this, and will want to question why this person would do this to them.

ISTJs don’t really respond well to guilt trips, since they focus on things which are more logical and practical. They do care about providing for their loved ones though, and work hard so that they can do this. If someone they care for tries to claim that they aren’t properly providing for them, this guilt trip might be capable of getting under the ISTJs skin. They try not to allow emotions to cloud their judgement, and would rather observe the facts of the situation to see if this person is trying to manipulate them. If it is someone the ISTJ trusts, it can be hard for them to completely recognize their manipulation.

ESTJs care about their loved ones and try hard to be able to provide for them. Most of the time they focus more on things which are tangible and practical, and so they tend to avoid falling into guilt trips. They can usually recognize when someone is simply trying to guilt them, especially since they can clearly see how much they do for this person. ESTJs don’t want to feel like they are failing though, and so this can be something which causes them to feel hurt by the guilt trip attempts.

ISFJs care deeply about their loved ones and simply want to do whatever they can to make them happy. Since the ISFJ does care so much, they can often be guilted into doing things for those around them. If someone does try and guilt trip the ISFJ it can be hard for them to really ignore this, since they care so deeply and are very affected by the emotions of others. If they feel like they can do something to please their loved ones, the ISFJ will often go out of their way to do so.

ESFJs can often be made to feel guilt rather easily, since they care so much about pleasing their loved ones. When someone they care for tries to guilt them into something, the ESFJ will have a hard time turning them down. They strive to be able to care for those around them and will do just about anything in order to please them. For the ESFJ guilt trips can truly upset them, and leave them feeling like they are failing and not doing enough for the people they love most.

ISTPs can usually ignore guilt trips, since they aren’t as strongly connected to emotions. ISTPs look more at what is tangible and factual, and so they can recognize when someone is being insincere and simply trying to guilt trip them. The ISTP can see where this person is not being entirely truthful, and where they don’t have facts to back up their claims and their attempts at creating a sense of guilt.

ESTPs care about their loved ones, and so sometimes guilt trips actually can affect them. They try to focus on facts instead of allowing themselves to become caught up in emotions, but this isn’t always easy for them. When the ESTP does care deeply about someone they want to be able to please them, and so sometimes the guilt trips can certainly cause them to feel anxious or upset about the situation.

ISFPs try to avoid being around people who will guilt them, but they certainly are susceptible to these emotions. While the ISFP might not always find themselves responding to these guilt trips by giving in, it still causes them a lot of internal pain. ISFPs want to be able to support their loved ones and make them happy, but they cannot simply do whatever is asked of them in this way. When they feel like the requests are wrong and not something they should follow through with, the ISFP simply needs to stand their ground.

ESFPs actually can be rather susceptible to guilt trips, even if their response might not show this. They can sometimes react by getting angry or frustrated with the person trying to manipulate them. Their response might make it seem like they aren’t feeling guilty, but deep down they often feel truly bad about the situation. ESFPs care about their loved ones and so guilt trips can really affect them and leave them feeling a sense of inner turmoil.