Are You Someone Who Notices Backhanded Compliments, Based on Your Personality Type 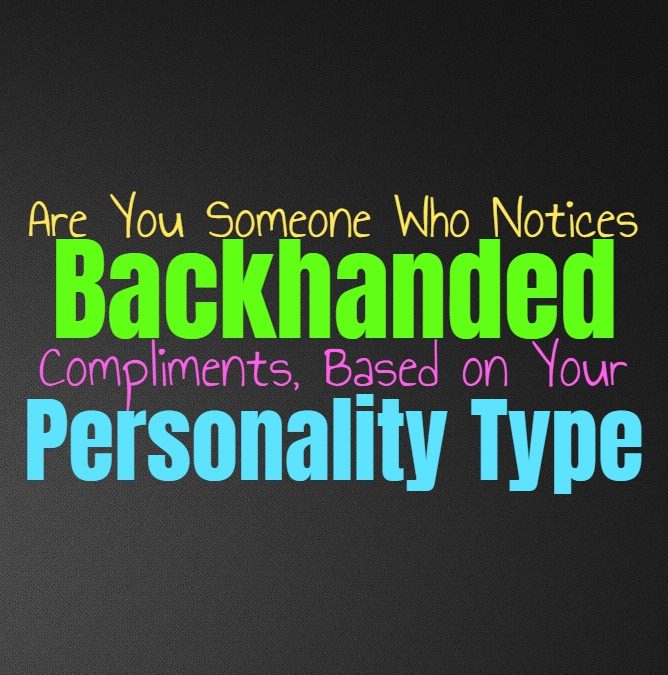 Are You Someone Who Notices Backhanded Compliments, Based on Your Personality Type

INFJs can sometimes overanalyze the intentions of people, and so they do often notice when someone is giving some sort of backhanded compliment. They might feel like this is happening even when it isn’t though, and even a sincere compliment can come across as harsh to them. For the most part INFJs are pretty good at recognizing the intentions of others, and can sense when their compliments are dripping with contempt. INFJs can become annoyed by these situations, especially when people around them don’t recognize the rudeness coming from that other person.

ENFJs are often capable of recognizing when someone isn’t being as kind as they want others to believe. They notice backhanded compliments fairly easily, especially since they are good at reading people. ENFJs can sense when someone’s comments are not coming from a positive place, and can often feel the meaning behind them. When someone delivers a backhanded compliment the ENFJ will not be oblivious to this, although they might not address this right away. They know that people might not entirely believe that the intentions were not good, so they often wait for the right time to make this known.

INFPs don’t always notice when someone is being insincere, at least not right away. They try to see the good in others, especially if this is coming from someone they care for. It isn’t that the INFP is oblivious or naive, they simply want to give someone a chance before thinking the absolute worst of them. They do however notice this easily with strangers, especially if they have already felt a negativity coming from that person. After a while it becomes more obvious to the INFP that these compliments aren’t very sincere, but they don’t like having to deal with this type of situation at all.

ENFPs can often see when someone is making backhanded compliment, but others times they assume this even when that isn’t the intention. They can sometimes struggle to trust when certain people are being sincere, simply because they don’t want to be made into a fool. ENFPs do want to see the best in others but their insecurities can sometimes stand in the way. They want to be able to recognize sincerity no matter what, and strive to be able to understand who they can and cannot trust in life.

ENTJs try not to focus on what is between the lines and instead just take most things at face value. They might be more skeptical of people they know they cannot trust, and will be more likely to recognize when they are delivering backhanded compliments towards the ENTJ. When it comes to people they are close to they don’t like assuming the worst of them, and prefer that these people be upfront and honest when they are expressing things towards them.

INTPs definitely recognize backhanded compliments, especially from people they don’t entirely trust. They often analyze and read into most things people say, and so when someone is not being sincere with their compliments they will certainly notice this. The only problem is that sometimes INTPs struggle to accept compliments even when they are completely honest and sincere. They might have a hard time trusting people and so they start to assume that every compliment carries some sort of agenda.

ENTPs do often notice backhanded compliments, especially when they come from people they already find themselves skeptical about. ENTPs notice when someone isn’t really being kind towards them, and can feel when their intentions are a bit sour. They try not to get caught up in these situations and just want to let these so called “compliments” roll off their backs. ENTPs are actually good at responding to these situations with equally as backhanded compliments, and so this helps them feel a bit more at ease with the situation.

ISTJs don’t really care to read between the lines and prefer to just take things at face value. If someone is trying to be shady or underhanded, they often know they will discover this later on. ISTJs don’t want to waste their time or energy obsessing over whether or not someone is being sincere with their compliments. If it is an obvious insult the ISTJ will notice this, but that doesn’t mean they care to acknowledge it either.

ESTJs don’t really care to pay attention to backhanded compliments, since they prefer people who are upfront and direct. If someone is trying to be manipulative the ESTJ knows this will eventually be exposed, and so they would rather let this occur on its own time. They don’t like being around people who are underhanded, but they also don’t care to acknowledge it all that much. For the ESTJ it is better to focus on the people who are supportive and who are sincere towards them.

ISFJs are often good at understanding the intentions behind someone’s words, and so they do notice when compliments are less than sincere. When someone continues to serve them with backhanded compliments, the ISFJ can often sense this but that doesn’t mean they will address it openly. They don’t want to disturb the harmony or peace in their environment simply because someone is trying to create tension. They will do their best to be just as underhanded, but in a way that people won’t seem rude.

ESFJs are definitely capable of recognizing when someone’s compliments are backhanded, since they are naturally in tune with the emotions of others. ESFJs can often sense when someone is not being completely sincere with them, and can feel the emotions behind their words. When someone is being insulting but trying to disguise it as a compliment, the ESFJ will certainly not appreciate this. They don’t want to express that they notice this outwardly, since they prefer to avoid getting into an argument which they cannot prove.

ISTPs don’t always notice when someone is delivering backhanded compliments, mostly because they don’t really care. They don’t like wasting their time and energy worrying whether or not someone is being sincere or simply trying to insult them. If they take the time to really pay attention then they aren’t foolish enough to ignore when someone is being insincere, but most of the time the ISTP simply prefers to stay away from people like this.

ESTPs don’t always recognize when someone is delivering a backhanded compliment, especially if it is someone they care about. When the ESTPs has already developed a connection with someone they might not want to believe the worst in these people. Because of this they find themselves being hurt by this person’s comment without entirely feeling like they have a right to be.

ISFPs do try to see the best in people and so they don’t want to believe that someone is trying to be underhanded. They try to ignore these backhanded compliments, unless they persist. For the ISFP it is best to avoid people who behave this way, and they will eventually notice when someone lacks a sense of sincerity towards them. It can be hard for them to really notice right away but that is mostly because they don’t want to accept this negativity.

ESFPs can sometimes be paranoid with things like backhanded compliments, and might feel like this is happening even when it isn’t. They might struggle to completely recognize when someone is being insulting, especially if they don’t want to accept it. ESFPs aren’t oblivious they just don’t like focusing on negativity and prefer being around people who are sincere and enjoy making the ESFP feel good about themselves.