Do You Ask for Permission, Based on Your Personality Type 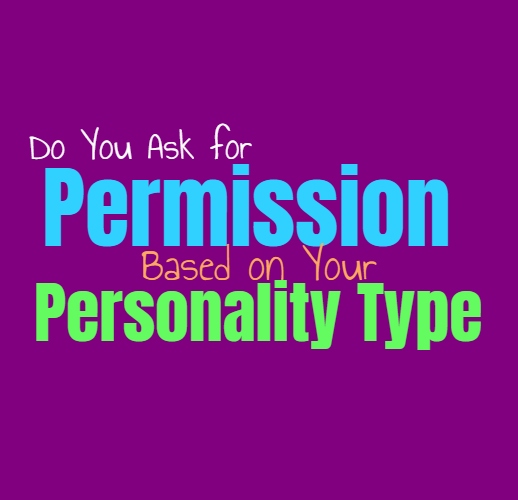 Do You Ask for Permission, Based on Your Personality Type

Some people are more comfortable asking permission before actually doing something, while others don’t feel the need to look to others for the go ahead. Here is how likely you are to ask for permission, based on your personality type.

INFJs do sometimes ask for permission, especially if it feels like they should. They don’t like being rude and try to avoid walking all over other people. For the INFJ asking permission with certain things is simply the polite things to do. There are times when they use this though, since they don’t want to make mistakes or step outside of their comfort zones. Sometimes asking permission allows them to process the situation instead of taking risks or putting themselves in an unnerving situation.

ENFPs don’t really enjoy having to ask for permission, instead they would rather do their own things. They prefer to make their own choices instead of feeling like they need to follow what someone else expects from them. For the ENFP it is important to make their own choices and sometimes this means breaking a few rules. They aren’t afraid of taking risks or doing things without constantly asking for permission, this is just how they prefer to live their lives.

ENTJs don’t believe in always asking permission, especially when it is something they can do without needing approval from someone else. ENTJs know what they want and they don’t need someone else to let them know they are allowed to go after this. They realize that sometimes rules are meant to be followed and that they do need to ask for permission, but they really only do this when it is required. Most of the time ENTJs are more than capable of making choices and moving forward without needing the permission of someone else.

INTPs don’t really like asking for permission and often prefer to make their own choices in life. For the INTP having to ask permission feels like they don’t have control of their lives or their choices. They don’t like needing to do what others expect from them and instead want to feel free to do things on their own. INTPs aren’t naturally focused on following rules or looking to others for permission, and so they want to be able to follow the path that feels right for them.

ENTPs are not fans of having to ask for permission, they prefer to follow their own choices and their own path in life. They don’t like following the rules and prefer to do what they want without constantly looking to other people for permission or approval. For the ENTP having to follow what other people expect of them can be rather draining and frustrating. They are more focused on doing what feels right and constantly striving to uncover the truth where they can.

ISTJs do sometimes believe in asking for permission, especially since they don’t like making mistakes. They want to get things right the first time around and so that means being sure before they take that next step. They also believe in following the rules and so this does often mean asking for permission before they make that next step or next choice. For the ISTJ it is best to be prepared for things and to be sure they are making the choices which will build the future they want.

ESTJs don’t like feeling like they have to constantly ask for permission about everything, but they are capable of doing this with certain things. ESTJs are actually rule following people who don’t like going against what is right, mostly because they want to get things done and be as efficient as possible. For the ESTJ there are some things which require asking for permission and they are more than comfortable doing this.

ISFJs ask for permission with certain things in life, since they believe it is the right thing to do. They won’t simply go on doing whatever they please without being sure they should take these steps. They believe in following the rules and work hard to get things done the right way. For ISFJs asking for permission means being sure that they are making the right choices and that they won’t do anything which might lead to upsetting someone else.

ISTPs don’t like asking for permission at all, and often prefer to make their own choices in life. For them it feels exhausting to constantly turn to someone else for permission or approval. ISTPs want to follow their own path and sometimes this means breaking the rules or going against what other people expect or want from them. They don’t do this simply to be rebellious, but they have a strong sense of independence and want to be sure they are making the right choices.

ESTPs don’t like asking for permission and often avoid doing this at all. There are some instances where they realize they are required to request permission and so they do their best to follow through with this. Most of the time though, ESTPs prefer to make their own choices and live their lives with a sense of independence. For them having to constantly ask others for permission feels exhausting and like they are not in control of their own lives.

ISFPs don’t like having to ask for permission since they are often very free-spirited people. They want to follow their own path and don’t naturally seek out the approval or permission of those around them. ISFPs often act without constantly thinking through things, and so they don’t really have the time to ask for someone else’s permission. They don’t do this to intentionally be rebellious, ISFPs simply believe in following their hearts and going after what inspires them the most.

ESFPs aren’t really ones to ask for permission, and almost always act on impulse with things. They do whatever feels right in that moments and follow their own passions in life. For the ESFP this creates a sense of independence and often causes them to avoid constantly asking for permission from someone else. It feels unnatural for the ESFP to request permission from others, instead they believe in following their hearts and chasing their dreams.