Are You Good at Drowning Others Out, Based on Your Personality Type 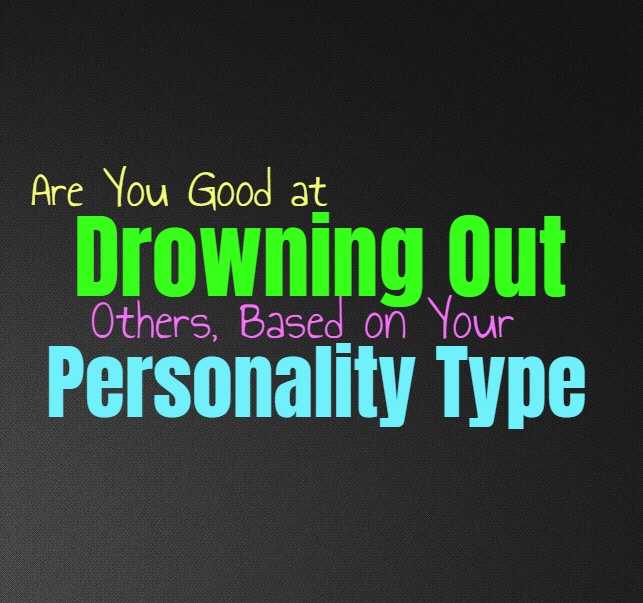 Are You Good at Drowning Others Out, Based on Your Personality Type

Some people are naturally capable of drowning out the noise of others, especially when they are feeling overwhelmed or annoyed by them. This is something not everyone is capable of and so it can be hard for some people to really shut out the noise around them. Here is how good you are at drowning others out, based on your personality type.

INFJs do sometimes have the ability to shut out the noise of the world, when they retreat inward and just spend time inside of their own minds. While they are capable of doing this when they have the space to get away from others, it can be more difficult when they are surrounded by people. When they have people around them trying to invade their bubble then it can be hard for them to drown out their emotions and their noise. INFJs do prefer to be able to disconnect and spend time on their own but it isn’t always easy when people won’t allow them to do so.

ENFJs do their best to drown things and people out when they need to focus on one thing but it can be challenging for them. ENFJs care about others and so when people invade their bubble it can be hard for them to drown them out. This can make it hard for the ENFJ to focus sometimes since it really isn’t easy or natural for them to block out the emotions or needs of those around them. ENFJs sometimes want to be able to get some peace and work on certain things alone, but it really becomes difficult for them.

INFPs can drown others out, and this is something they need to do sometimes. When the INFP really needs time to themselves to recharge and just dive into their own inner worlds, they definitely need to be able to block out the world and the people around them. Even when the INFP cares deeply for someone they might need time away, this isn’t something they do to be hurtful or avoidant. For the INFP being able to just shut out the world and find a way to recharge is truly important to them.

ENFPs do sometimes have the ability to drown out others, and this is something they need to do as well. They have rather overactive inner minds and because of this they need time to just focus on their thoughts and imagination. ENFPs can block out the noise around them when they are deeply focused on something, but there are only so many things they can really drown out. If someone is actively being noisy or trying to get their attention then the ENFP has a hard time closing off from this and they can become rather annoyed.

INTJs do have a way of drowning others out, especially when they need to focus on something. They are good at going into their own world or shell, and simply closing out the things they don’t want to focus on. INTJs don’t want to pay much attention to things which they aren’t personally interested in or don’t find value in. When they are trying to deal with something they can become deeply frustrated by someone trying to invade their bubble or distract them. The INTJ usually can block people out but there are limits to their ability to disconnect if someone is actively trying to get under their skin.

ENTJs are often capable of drowning others out when they are laser focused on something. They work hard to get things done and don’t want to allow distracted to hold them back. Most of the time they are capable of blocking people out and will do their best to avoid letting their noise and annoyance to get in their way. When someone is actively trying to distract the ENTJ and won’t just let them drown out the world, they often need to get away from this person and do their best to avoid their frustrations.

INTPs are actually surprisingly good at drowning others out and can often do this rather easily. It takes a lot to really break through when the INTP is actively trying to drown others out. They can become so wrapped inside of their own minds that it is hard to really pull them out. They need this time to themselves to recharge and just spend time inside of their own thoughts. INTPs can certainly drown others out, especially when they need to.

ENTPs do sometimes have the ability to drown others out, especially when they want to focus on something. When their minds become pulled into an idea or thought they can find themselves blocking out others. ENTPs have rather vivid inner minds and so this is the way they tend to drown out the world around them. They do become distracted easily though, and when sometimes draws their interest it can become difficult for them to really shut this out.

ISTJs try hard to focus on the task in front of them, but it can be difficult when people are continuously requesting things from them. Sometimes it can be hard for them to drown others out, but they do their best when there is something they need to get done. ISTJs try to set clear boundaries so that they don’t need to ignore or block people out. They want others to know when they are working on something and just need to be alone.

ESTJs do struggle to drown people out sometimes, since they can be drawn into to the people around them. When the ESTJ is really focused on getting something done they often want to be able to drown people out so that they don’t become distracted. They do their best to set clear boundaries so that they don’t have to block out those around them, but sometimes it can be frustrated for them when people do not respect this.

ISFJs sometimes have a hard time blocking others out, since they are so in tune with the emotions of those around them. They might try to drown things out so that they can focus on what they need to get done, but the needs of others often come first. When someone is upset or needs the ISFJs help it becomes nearly impossible for them to drown with person out even if they want to.

ESFJs do sometimes struggle to drown others out, especially their loved ones. When someone is in need of something from the ESFJ they struggle to really ignore this. They are so in tune with the emotions of others and so it becomes truly difficult for them to drown out these feelings. ESFJs want to be there for others and so this need to please makes it truly difficult for them to block out the world around them.

ISTPs are often distracted by the things around them and so drowning out the noise of the world can be difficult for them. They are in touch with the physical world and so if someone is actively trying to get their attention it isn’t always easy for them to drown this out. ISTPs do however find it easy to find another distraction to draw their attention away from the whoever is trying to get under their skin.

ESTPs can sometimes struggle to drown out the noise of the world and people around them. They are easily distracted and find themselves drawn to the world around them. They can certainly be drawn to the physical things they see and feel, and so drowning people out can be difficult. They have a hard time ignoring people when they are actively seeking the ESTPs attention, even if they want desperately to be able to block them out.

ISFPs can become drawn to the world around them and so it can be hard for them to drown people out sometimes. They do have active inner minds and find themselves pulled in many different directions, making it challenging for them to stay in one place or thought for too long. It can be difficult for them to block people out when those people are actively trying to grab their attention.

ESFPs don’t often drown others out, since they prefer to live in the present. They want to be connected to the people around them and just don’t find it natural to drown them out. ESFPs really don’t block people out easily, even if they wanted to it would be challenging for them. They care about their loved ones and their words affect the ESFP deeply and easily.