Here’s How You Handle Moving, Based on Your Personality Type 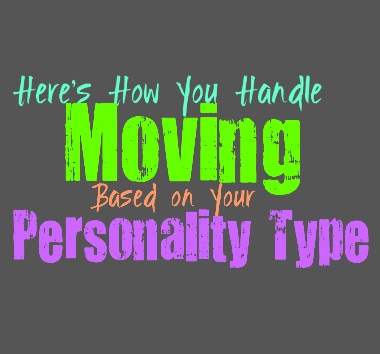 Here’s How You Handle Moving, Based on Your Personality Type

Moving is always a big life change and can definitely be stressful for anyone. While moving to a new place or a new home can cause a bit of anxiety, for some people it is a bit more stressful than others. Here is how you handle moving somewhere new, based on your personality type.

For the INFJ moving can feel like a major step, sometimes this can be a bit overwhelming. They don’t often enjoy making large changes, especially if they feel like there is a lot of risk involved. INFJs want to make sure that they think through each action, and don’t do anything that might harm or compromise the well-being of their loved ones. INFJs also don’t like failure, and because of this fear sometimes they hold themselves back from things. Moving can be frightening for the INFJ at first, but once they begin to adjust things get much better.

ENFJs take a lot on their shoulders, which can leave them feeling stressed. They don’t ever want to disappoint their loved ones, so the ENFJ tries to plan things accordingly. For them making a big move can be a bit overwhelming since they want to make sure that they don’t make any mistakes. Making the choice to move can mean a lot of work and it could also greatly affect everyone around them. This type of change can definitely be a heavy burden for the ENFJ, but they often do their best to overcome these challenges.

INFPs become unhappy when they are stagnant, but sometimes moving and big changes can be frightening. They might hold themselves back from moving somewhere else, even though in their hearts they know it is right. If their fear controls them it is often going to weight on the INFP and leave them feeling trapped. When they finally do build up the courage to take that next step, it is often rewarding for the INFP to experience someplace new.

ENFPs often enjoy being able to experience new things, but sometimes a big move can be a bit frightening. If they live their lives in the same place they can become accustomed to this comfort, but at the same time they do like to experience excitement and change. ENFPs can become trapped in this place of being afraid of making those big moves, but of needing to experience something new. While ENFPs might be afraid of moving, they will ultimately be happy with taking the risk if it feels right for them.

INTJs often dislike too much change, especially when they have grown comfortable with a place. They like being able to commit to something and feel more at ease with what they know and can navigate properly. If the INTJ does feel stagnant and realizes that a move is necessary, then they will often take the time to research and learn. The INTJ will do their best to research so that they can figure out if making this move will be right for them. They don’t make decisions without being sure, but once they are sure the INTJ won’t be afraid of taking that next step.

ENTJs often like to be prepared for everything they do, and dislike stepping into something without being able to navigate it properly. When it comes to deciding to move somewhere new, the ENTJ wants to take the time to be sure it is the right choice. Once they have done enough research the ENTJ will feel comfortable taking that next step. They want to be sure they are doing what is right and are more comfortable when they are prepared for something. ENTJs aren’t always comfortable with too much change, but they will if it is the right thing for them.

INTPs can have a hard time making big moves, simply because motivation is a challenge for them. While it might be difficult the INTP does enjoy being able to experience new things. They might feel stagnant where they are and feel like they need to move somewhere new to discover if it feels right. INTPs enjoy being able to learn and meet people who might appreciate them better. Moving can definitely be beneficial for the INTPs state of mind, but sometimes it can be difficult to actually take that step.

ENTPs often feel at ease making changes and possibly making a big move somewhere new. They really dislike remaining stagnant, and will want to move if a place feels played out to them. When the ENTP has lived somewhere for a while and it begins to feel like everything is the same, they will certainly want to try something new, possibly moving to another town. They enjoy change and sometimes do this just to shake things up and see what might happen.

ISTJs often dislike making any big changes, especially without being prepared for them. The idea of moving away from what they know and are comfortable with, often feels a bit unnerving for the ISTJ. They want to put down roots and prefer to commit to a home where they can build a real life. While ISTJs don’t like moving, they will make this next step if it is the best and most logical decision for themselves and their family.

ESTJs aren’t often fans of making a big move, simply because they prefer comfort and stability. The ESTJ wants to be prepared for whatever will come next, and want to be sure of things before moving forward. ESTJs care about their loved ones as well, and they want to make sure their actions won’t affect them. For the ESTJ moving can be stressful and any large changes like this can seem like a frightening move. They will however look at it from a logical standpoint, and will make that move if it is the right choice.

ISFJs often feel nervous about the idea of moving, especially since they aren’t fans of change. ISFJs prefer to live their lives with a sense of stability and comfort. For them having to uproot their lives to move somewhere new, can feel a bit overwhelming. ISFJs want to be sure that what they are doing is the right thing, and this isn’t always something they can tangibly prove. ISFJs prefer to put down roots somewhere and often enjoy the idea of having a family and living in a home they know.

ESFJs rarely enjoy the idea of moving somewhere new, and most of the time it feels a bit frightening. ESFJs enjoy comfort and stability, and want to be prepared for most things. They also want to take care of their loved ones, and don’t like taking risks that might hurt them in any way. When it comes to making a move somewhere new, the ESFJ wants to be sure it is the best choice for themselves and their family. For them it is more about finding the best home so that they can build a future there.

ISTPs are rarely afraid of making a big move, since they enjoy living their lives with a sense of adventure. If moving somewhere new inspires and excites the ISTP, then they will certainly want to take that next step. They don’t always feel like it is requires that they constantly bounce around, and they are more capable of putting down roots than people realize. ISTPs just want to be sure they are making the choice that feels right for them, instead of allowing others to dictate this.

ISFPs might be afraid of moving at first, and might have a hard time motivating themselves. Ultimately it can be good for them to experience a new place and even new people. ISFPs live their lives in the present and prefer to follow their hearts instead of their heads. When it comes to making a big move they need to feel like it is the best choice for them, even though it might be frightening.

ESFPs aren’t usually afraid of moving somewhere new, and might even be excited by the idea. For the ESFP living in the present is important, since they simply want to enjoy life. Moving can feel like a new adventure for the ESFP, especially if they are doing it with someone they love. Stagnancy can cause the ESFP to become bored and unhappy, so moving can often shake things up a bit for them.