Do You Like Making Bets, According to Your Personality Type 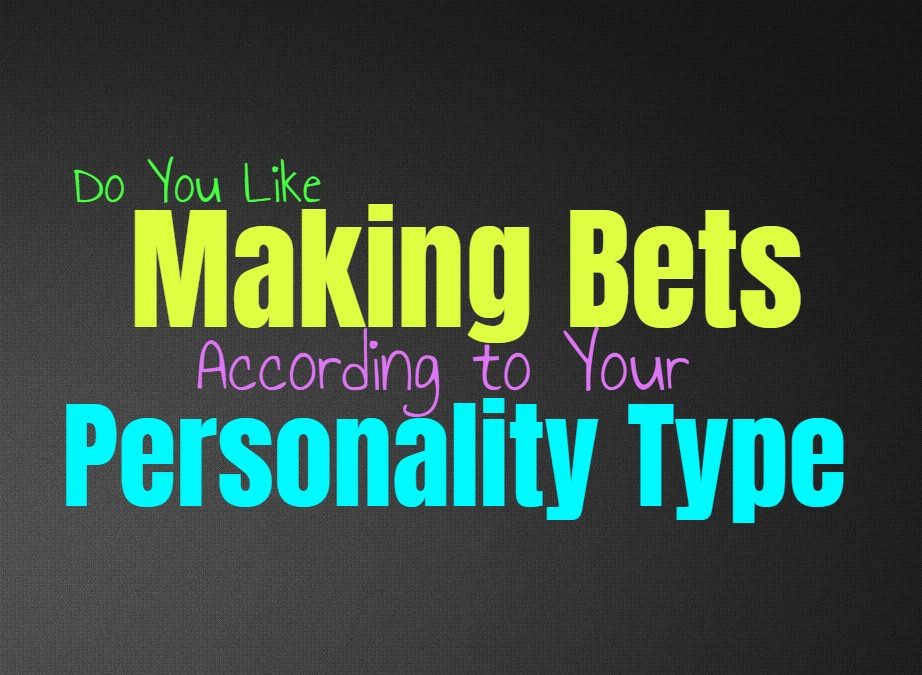 Do You Like Making Bets, According to Your Personality Type

INFJs aren’t often betting people simply because they don’t feel this strong need to make money off of being right. For the INFJ often the satisfaction of being is plenty, but sometimes they see reason why they don’t need to prove this to others. INFJs do sometimes have a competitive streak, but they don’t like allowing this to cause tension between themselves and others. For the INFJ sometimes making bets is just taking risks that they will be disappointed or make a mistake on something they should have been more careful with.

ENFJs do sometimes allow their more competitive side to come out, and with this happens they are more likely to engage in making bets. They might do this just to prove that they are right about something, wanting to come against those who challenge them. ENFJs try to make bets in a way that won’t upset anyone or leave people feeling overwhelmed by their competitive nature. At the same time the ENFJ does have this inner desire to be a tiny bit reckless and bet on some things here and there, but this is something that comes out in small amount.

INFPs don’t usually find themselves drawn to the idea of making bets, since they don’t often show their competitive side. INFPs are more likely to compete with themselves, and want to push to always be better with the things they are passionate about. When it comes to making bets against people, this can feel a bit unusual for the INFP and isn’t often something they are all that comfortable with. They don’t like this type of tension and usually feel like it is a bit pointless.

ENFPs are often drawn to new challenges and so sometimes they might enjoy making bets. Whether this be on a larger scale, or simply making a little bet between friends. It doesn’t always have to include betting money, sometimes it is just the idea of betting someone that they are right about a certain subject. ENFPs do have a competitive streak and often have a desire to prove themselves right and show how much they know about something.

INTJs are highly competitive people and sometimes this causes them to be interested in making bets. Sometimes this is just a simple bet here and there, one between friends where they can prove themselves right about something which is important to them. INTJs are very aware of what they know, and so they want to be able to prove others wrong when they challenge their knowledge. Sometimes a good bet is just a fun way to take on these challenges and show just how capable they are.

ENTJs do often enjoy making bets, simply because they are competitive people who enjoy being right. They are fully aware of their knowledge base and so they are often confident in the fact that they are right about something. Because of this ENTJs will certainly be willing to bet on the things they know, and often enjoy being able to do this. For them betting is just a good way to prove themselves right, and to prove the person challenging them to be utterly wrong.

INTPs might enjoy betting in some situations, since they enjoy taking on new challenges. If the things they are betting on have a way for them to really analyze the situation and be sure they are correct, then this is thrilling for the INTP. They like to challenge themselves and experience new things, and always seek out way to expand and grow their minds. This might not be something the INTP enjoys doing constantly, but they aren’t averse to making bets.

ENTPs might be the betting type, simply because they enjoy taking on a good challenge. For them it can be deeply fulfilling to push themselves to experience new things and take on a good challenge. Betting against someone isn’t much different than getting into a heated debate, and might even be where the debate comes to a climax. For the ENTP it can be rewarding to bet against someone just to prove them wrong, and come out the winner.

ISTJs may not be the betting kind in most situations, simply because they prefer to play things safe. For them making bets too often can seem reckless, and simply a way to impress others. There might be the occasional situation where the ISTJ takes on this challenge, especially if they feel a strong inner need to prove someone wrong. ISTJs only make bets when they are completely sure of themselves, and know that they cannot lose.

ESTJs might enjoy making bets simply because they are competitive people who like taking on new challenges. This competitive side of their personality can drive them to challenge others, in order to prove themselves right. ESTJs only make the bets they can be sure they will win at, and don’t like taking chances on things which might not work out how they want. For the ESTJ it is rewarding to be able to compete with others, especially when they are confident in themselves.

ISFJs might not be all that interested in making bets, especially if it will be something which disrupts the peace and harmony in their environment. ISFJs like to keep things more peaceful and want to ensure that everyone around them is comfortable. That doesn’t mean they are incapable of taking on a little fun and lighthearted competition, it just depends on the situation and the reasoning behind it. They might make the occasional bet, but it isn’t usually something they are drawn to.

ESFJs aren’t usually the betting type, simply because it seems a bit pointless to invest their energy into this. They might bet against someone they are arguing with, especially if they know that person is wrong. ESFJs do have a competitive steak inside of them, and dislike when another person acts as if they are clueless when the ESFJ knows what they are talking about. In these situations they might make a bet just to have the chance to really prove someone wrong.

ISTPs do feel rewarding by things which are thrilling and even a bit of a challenge. For them making a bet here and there is just a fun way to spice things up. When the situation becomes too stagnant the ISTP can find themselves becoming bored or antsy. Tossing in the occasional bet can be an interesting way to shake things up, and put a bit of competition in front of their friends or whomever is around them.

ESTPs do enjoy things which are exciting and thrilling, and so they might enjoy making the occasion bet. For the ESTP it is about being able to prove themselves right, which is something they do get a bit of a thrill out of. They spend a lot of time researching and working to get their facts straight, so then the ESTP knows something they feel very sure about this. Because of this they do like making bets where they can prove themselves right, instead of simply arguing without a solution in sight.

ISFPs aren’t usually the betting type, simply because this often feels a bit pointless for them. They would rather focus on things which are fulfilling for them, and in most situations betting just feels fruitless. They won’t mind the occasional bet which is done completely in jest, but it isn’t something they often seek out. ISFPs don’t need to compete against other people, since they are often competing against themselves.

ESFPs aren’t usually the betting type, and might not really enjoy this. While they do enjoy proving themselves right, they usually just do this without having to lay down a bet first. ESFPs can become bored of having to constantly bet over things and would rather just focus on the things which are exciting and thrilling for them. ESFPs might engage in the occasion bet simply for fun, but it isn’t something they are likely interested in all of the time.