Just How Conventional You Are, According to Your Personality Type 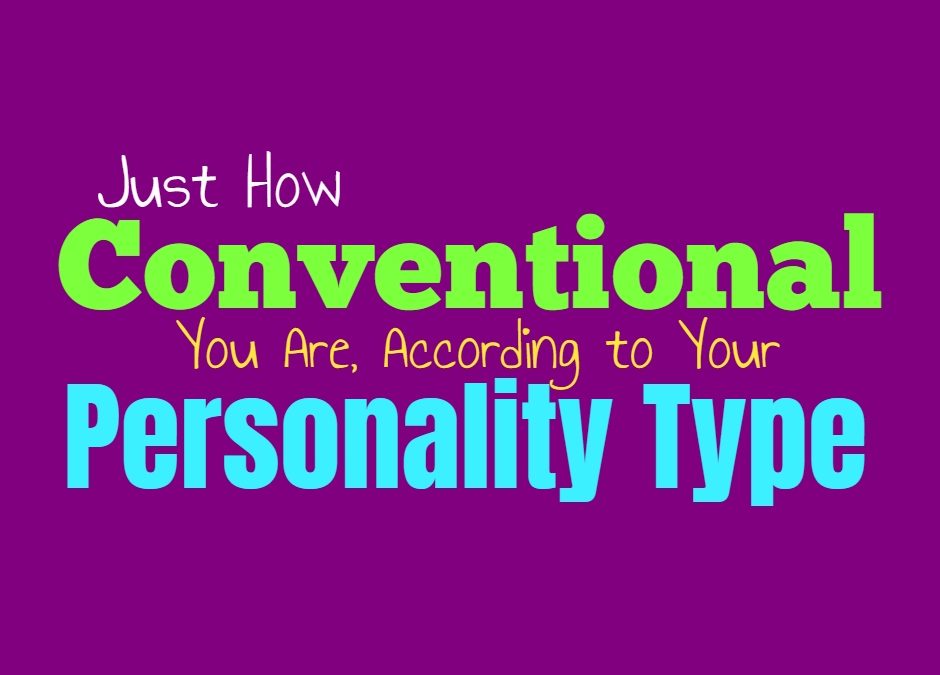 Just How Conventional You Are, According to Your Personality Type

Some people are a bit more conventional than others, and prefer to keep things a bit more traditional or even ordinary. They would rather this sense of comfort, while others are much more drawn to unconventional things, and don’t mind when things seem a bit odd to others. Here is how conventional you are, based on your personality type.

INFJs are almost always some of the more unconventional people, even if this isn’t something that shows outwardly. While some INFJs might seek to blend in so that they don’t upset anyone, deep down they are not at all conventional people. They often find themselves drawn towards things which are a bit unusual, and don’t really feel drawn to ordinary things in life. For the INFJ anything that is too conventional often feels mundane and isn’t as easy for them to feel emotionally connected to.

ENFJs might try to appear a certain way around some people, simply because they don’t want to be seen as odd. They have a hard being seen negatively by others, but in truth they aren’t conventional people. They can’t really hide this completely though, only find ways to tone it down a bit. ENFJs are naturally more unconventional, and even enjoy things that are unusual or out of the spectrum of what is traditional. They just don’t naturally enjoy things that are traditional simply because it seems a bit mundane.

INFPs are often more unconventional people, and enjoy things that might be a little less than ordinary. They don’t like anything that is too traditional, since this often leaves them feeling restrained. INFPs enjoy things that are more unusual and often find themselves drawn in different directions. For the INFP it is more rewarding to explore different experiences and things that don’t fit into what people consider conventional or traditional.

ENFPs aren’t naturally conventional people and often find themselves more drawn towards things that aren’t that traditional. They don’t like having to fit into the same ordinary expectations, and enjoy being able to explore different experiences. For the ENFP it is truly rewarding to live their lives with a sense of openness and excitement, and for them this means leaning more towards the unconventional things in life.

INTJs don’t mind things that are a bit conventional, but they also aren’t completely against things that are unconventional. INTJs simply like to explore information and find ways to learn as much as they can, this includes doing it in both traditional and even unconventional ways. INTJs do often lean more towards proven methods in the end, but that doesn’t mean they won’t open there minds up to different options.

ENTJs don’t mind when something is unconventional, as long as it doesn’t go too far outside of what they are used to. They are willing to open up to new experiences and ideas, but ultimately they are likely to come back to what they know and understand. ENTJs believe in following methods they know will be effective, since they don’t like wasting their time or energy on something which might fail. For the ENTJ sometimes things which are more conventional are easier to work with effectively, but at the same time they aren’t against more unconventional practices.

INTPs aren’t usually the most conventional people and are usually more drawn to things which are less traditional. They enjoy experiencing new things and are often very open-minded people. For the INTP things which are outside the realm of what others consider normal, are definitely more inspiring. They enjoy exploration and are naturally curious people, they often find themselves struggling to fit into what others expect or consider normal.

ENTPs usually aren’t the most conventional people who enjoy being able to experience new things. Something that is traditional often feels a bit boring for the ENTP and far too easy to predict. They enjoy things that are a bit challenging and even unusual, and so they are certainly drawn towards things which are unconventional. Their curiosity is definitely something which inspires the ENTP to try new things, and sometimes this means things which are a bit more unconventional.

ISTJs are often more conventional people and they often enjoy things which are traditional. They don’t really like stepping too far outside of their comfort zone, since it can leave them feeling incapable of handling the situation. ISTJs want to be prepared for everything and so this means looking at what is proven and often more conventional. ISTJs also don’t like venturing out of what is known, or what they naturally understand.

ESTJs are often more conventional people, since they value things which are traditional. For them it often feels a bit draining to feel pushed to try out new things. ESTJs believe in being prepared for whatever might happen, and so this often means sticking within their comfort zone and the things they know and understand. For the ESTJ things which are unconventional can mean veering away from their goals and what they believe in.

ISTPs aren’t always conventional people, since they enjoy experiencing new and exciting things. They aren’t afraid of stepping outside of their comfort zone in order to experience something enjoyable. For the ISTP it is more fulfilling to jump into something new, even if this something is strange or unconventional. They aren’t afraid of taking risks or doing things which seem odd or nontraditional to others.

ESTPs are not always conventional people, sometimes they enjoy trying things that are unusual just because it is a bit shocking to others. ESTPs want to dive into new things and want their lives to be filled with adventure and excitement. For the ESTP being stuck in a conventional or mundane lifestyle can feel draining, and really isn’t something they are looking for in their lives.

ISFPs are often unconventional people, but they might have a hard time with this. If they are around people who judge them for this, it can leave the ISFP feeling misunderstood and hurt. They want to be around people who appreciate them for who they are, even if they seem a bit strange sometimes. For the ISFP who is around more conventional people, this can sap their energy after a while.

ESFPs can be both conventional and unconventional people, but they go after what feels right for them in the moment. There are some times when they might want to experience fitting in and don’t want to seem too odd to others. In other situations the ESFP just wants to experience new things and doesn’t like feeling trapped in the same stagnant situation. They don’t like things which are mundane and so sometimes this leads them to more unconventional choices.