Are You Good at Prying, Based on Your Personality Type 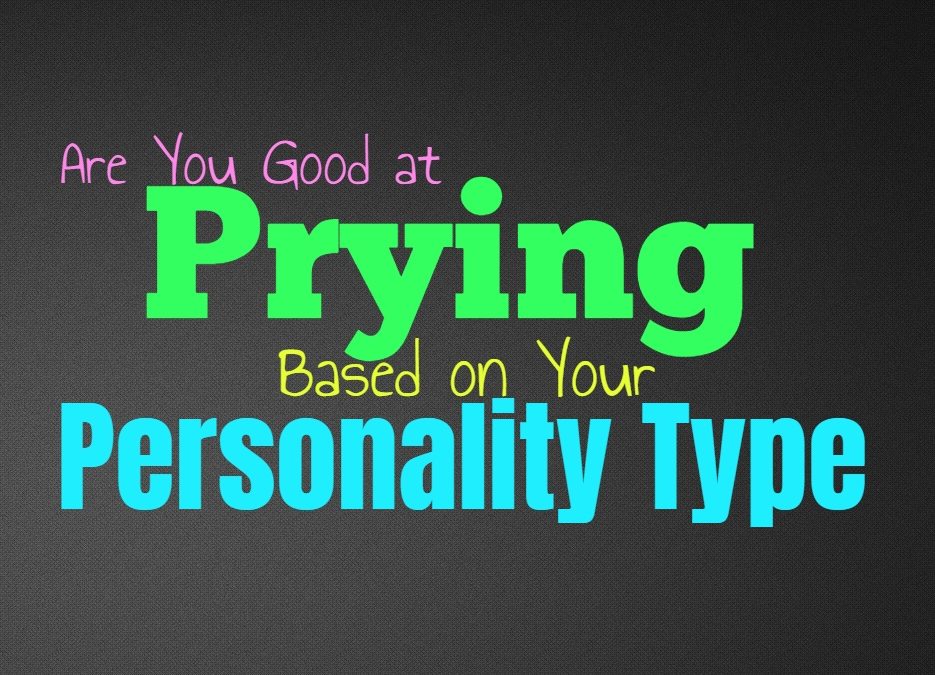 Are You Good at Prying, Based on Your Personality Type

While prying isn’t really something we consider to be a good thing, there are some people who are very good at doing it. They know how to say and do the right things to pry the information out of someone, and this can be useful when they are trying to understand that individual better. Here is how good you are at prying, based on your personality type.

INFJs are often good at coaxing things out of people, and so they can be good at prying in other people’s business. They can also be subtle about it, so that people don’t actually feel like they are prying or being nosy. INFJs have a knack for making people feel comfortable and so they can often pry into their lives with ease. Most of the time INFJs prefer to give people the space to divulge information when they are ready, and often have patience when it comes to getting to know a person.

ENFJs are actually very good at prying and coaxing information out of people. They have a knack for making others feel comfortable around them, this often comes from their sense of empathy. The fact that ENFJs can easily understand and connect with people, helps them to get information from them that most people wouldn’t be capable of learning. They often know how to pry into other people’s business without it being upsetting to them or annoying.

INFPs don’t usually like prying into people’s lives if they are trying to have their space, but that doesn’t mean they aren’t capable of it. When they are truly curious about someone they often find themselves capable of pushing the limits a bit and finding ways to pry into their business. INFPs do want to learn about the people they love, and believe they should be allowed to become closer to them and really learn about their secrets and desires.

ENFPs are often capable of prying because they have a knack for pushing until they get their way. They often know just how to keep going until someone finally gives into their demands or requests. ENFPs do have a curious nature and sometimes this causes them to pry even when someone has made it clear they don’t want them to. The ENFP is trying to upset anyone, but they do seem to have a way of pushing buttons and doing whatever it takes to get what they want.

INTJs don’t usually try to pry unless they feel like it is important that they learn more about someone. They can often uncover information without forcing it out of someone, especially since they are researchers. INTJs can certainly express their curiosity and do their best to get it out of someone, but they aren’t naturally empathetic people and so it might be difficult for them to really force it out of someone without having to intimidate them in some way, or without convincing them by debating the subject.

ENTJs don’t generally feel the need to pry, but there are times when certain information might be important to them. They are often good at getting their way, whether that means being pushy or just finding a way around someone. ENTJs might not be good at prying in a more sensitive and empathetic manner, but they do have a way of getting what they want. If they need to be pushy or demanding in order to pry into someone’s business, they will be capable of doing this.

INTPs don’t like having to pry, especially when someone has made it clear they want their space. INTPs don’t want to invade someone’s privacy, especially since they want their own space respected. If there is a situation where they really need to uncover certain information, they might not be too bad at doing this, but not in the prying sense. They usually find out things by researching or going around someone, not by forcing it out of them.

ESTJs do have a way of pushing people when there is something they want to know. They don’t necessarily do this in a subtle manner, instead they can be a bit pushy. Sometimes this does help out the ESTJ when they are curious about something or need to know more information. They do their best to uncover information they need from someone, but they don’t necessarily find it easy to get this information by just coaxing it out of someone.

ISFJs do have a way of prying if they want to, since they are compassionate people who seek to make others feel comfortable. If they need to gain certain information from someone they do their best to coax it out of them without making it seem like they are being pushy. Sometimes this can be upsetting to others, since they don’t like feeling like they are being manipulated in some ways, but ISFJ try not to cross those lines.

ESFJs can sometimes be prying people, especially when they feel like it is important that they know certain information. They do their best to take care of their loved ones and sometimes this means they want to know more about them and their secrets. ESFJs can be good at prying, mostly because they are compassionate people who often know how to make others feel comfortable. Their ability to put others at ease can certainly help them to pry when need be.

ISTPs don’t usually pry, instead they believe in giving people their space. While they can be charming people who often know how to coax information out of people, they often prefer not to do this. ISTPs enjoy their space, and so they also believe it is important to give other people this same respect. For ISTPs it is important to respect people’s personal space, since they don’t like their own privacy invaded.

ESTPs are charming people who do sometimes feel like prying when maybe they shouldn’t. They don’t do this to be pushy, but they become a bit curious if someone is withholding. When the ESTP needs to know more about someone they will do their best to use their charms in order to pry a bit. ESTPs want to do this without making it obvious and try to get the information they need without being too pushy.

ISFPs don’t like to pry when someone has it made it clear they want their space, but that doesn’t mean they aren’t good at it. ISFPs are charming people and often know how to make others feel comfortable. They do their best to connect with others and this does help them to pry a bit when they need to. At the same time they usually prefer to give people their space and want to let them have their privacy if that is what they need.

ESFPs are charismatic and friendly people and sometimes this causes them to be more capable of prying when they want to. They do have a tendency to push people since they are curious people. They want to learn what they can about their loved ones and so often this causes them to pry a bit. ESFPs can be good at coaxing information out of others, especially when it is someone who cares for them.