Are You Likely to Put on a Happy Face Under Turmoil, Based on Your Personality Type 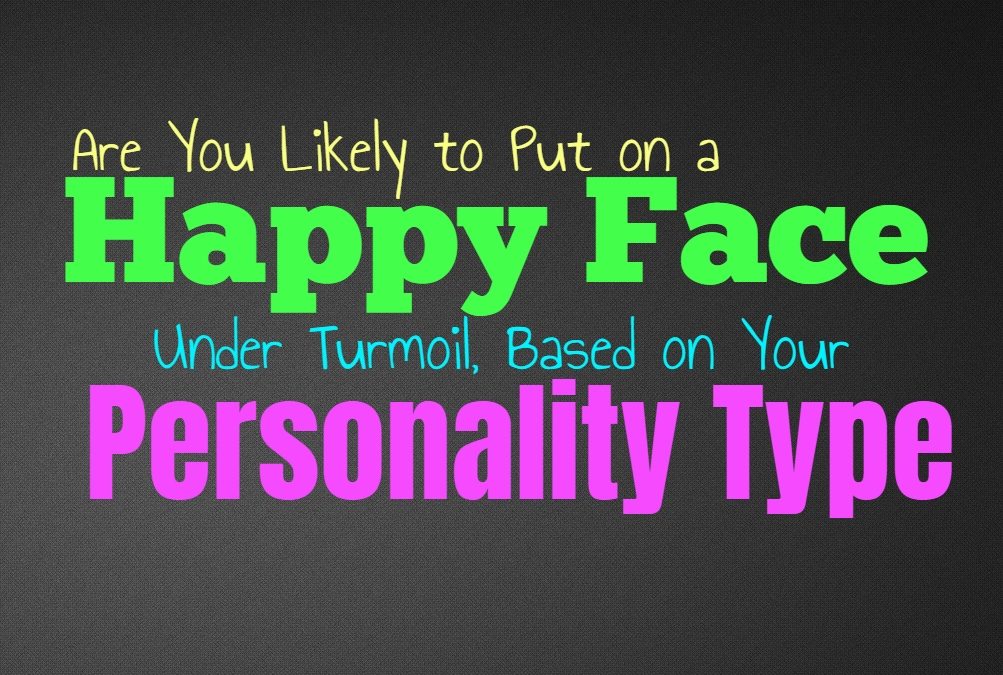 Are You Likely to Put on a Happy Face Under Turmoil, Based on Your Personality Type

Some people put on a happy face even when they are upset or hurt, not wanting to show others their pain. While other people find it difficult to pretend or hide how they are really feeling. Here is how likely you are to put on a happy face under stress or turmoil, based on your personality type.

INFJs do sometimes find themselves putting on a happy face, mostly because they don’t want to deal with people asking questions. Sometimes it can be more draining having to deal with what everyone expects of them, so they just keep their feelings to themselves. While INFJs do become overwhelmed if they bottle this up for too long, they often need to find someone they trust to really open up to. Having this one person they can be themselves around and really show when they aren’t happy, means a lot for the INFJ.

ENFJs do often find themselves putting on a happy face even when they are struggling, mostly because they don’t want to be a burden. ENFJs try hard to be someone that others can turn to, and so they want to appear strong even when they are having a hard time. ENFJs are also perfectionists and have a hard time letting other people see their flaws. For the ENFJ it is often more natural to hide their pain and put on a happy face, than it is to openly express their fears and pain.

INFPs have a hard time putting on a happy face when they are feeling down, since their emotions often show outwardly. For the INFP it doesn’t feel right to pretend, and it often feels like they are being dishonest. They would rather be upfront than pretend that they feel something they don’t actually feel. For the INFP putting on a happy face is something that feels fake and that just isn’t who they are. They express who they are without remorse, and want to be open about their feelings.

ENFPs don’t find it natural to put on a happy face when they are struggling, and would rather be sincere. They do try to remain positive but there is nothing fake about this, they just do their best to see the bright side of things even when it appears dark. ENFPs do their best to remain positive and want to seek out ways to keep themselves happy. When there is something seriously troubling in the ENFPs life, they often have a hard time pretending to feel happy and this is something that show outwardly.

INTJs aren’t likely to put on a happy face, especially when they are stressed about something. While they aren’t likely to mope or whine, they would rather just focus on getting things done. INTJs aren’t always the most emotionally expressive people, and so putting on a fake happy face is a bit over the top for them. They would rather just focus on solving whatever problem is in front of them, and want to overcome their struggles instead of dwelling on them or putting some happy spin on it.

ENTJs don’t tend to put on a happy face, simply because they believe in being realistic. While they don’t want to sit around and whine about their problems, they do want to find ways to improve the situation. Instead of pretending everything is fine, the ENTJ will search for efficient ways to make things better and solve their issues. They do sometimes struggle to really show their pain to others and so they do appear to put on a bit of a front when they are dealing with pain, but that doesn’t always include a happy face.

ENTPs do sometimes put on a happy face around others, simply because they don’t want to deal with people asking questions. They would rather focus on solving their problems and want to find ways to improve whatever it making them feel poorly. For the ENTP it is best to find solutions, rather than sit around moping about their pain. For the ENTP it can be easier to make jokes though, and pretend like everything is fine when they are around other people, mostly to avoid the sympathy.

ISTJs don’t necessarily put on a happy face, but they do sometimes put up a front that everything is fine even when it isn’t. They don’t want people to worry or become stressed out, even when the ISTJ is having a hard time. ISTJs do their best to take things upon themselves and focus on solving problems rather than complaining about them. People can be hard for the ISTJ to deal with sometimes, and they don’t want to have everyone prying or asking questions.

ESTJs don’t like showing their emotions and so they might put on a happy face or a positive spin even when they are dealing with some negative emotions. ESTJs would rather focus on getting things done and want to solve the problem at hand. For the ESTJ it is best to focus on making things better, instead of sitting around moping or expressing their sadness to their loved ones. This can cause them to bury things and put on a happy face, even when they are a bit stressed.

ISFJs definitely put on a happy face, even when they are having a hard time. They don’t want their pain to burden those around them and so they do their best to put a positive spin on things. ISFJs would rather find ways to solve their problems without anyone ever realizing that they were struggling in the first place. ISFJs have a hard time expressing their pain, since it feels like they are disrupting the harmony in their environment and they don’t want to drag others down with them.

ESFJs definitely put on a happy face, even when they are struggling or having a hard time. They don’t want to burden others when they are in pain, instead they would rather keep it to themselves. ESFJs want to make their loved ones happy and so they do their best to keep things positive and maintain a sense of harmony. ESFJs do sometimes struggle when they are feeling overwhelmed, but they don’t want those around them to see this or be brought down by it.

ISTPs aren’t the type to put on a happy face, but at the same time they won’t often express their negative emotions or pain outwardly. ISTPs won’t try to pretend for the sake of others, and so they often live somewhere in the middle when it comes to this. They might not put up a front and pretend to be all happy or positive, but they also don’t feel a strong need to express outwardly that they are in pain or struggling with something.

ESTPs do sometimes put on a happy face with strangers, since they don’t want to deal with all of the inquiries and questions. They would rather maintain a sort of distance with most people and don’t feel the need to express their emotions to them. When it comes to their close loved ones though, ESTPs don’t find it natural to hide and put on some sort of happy face. They would rather be honest and express that they are struggling, in hopes of feeling a sense of support from them.

ISFPs do sometimes put on a happy face around strangers or outsiders, since they want to remain positive. Most of the time though they struggle to really conceal their emotions and so their pain is pretty obvious to those around them. Even though they aren’t necessarily trying to make their feelings obvious, it just seems to be written on the ISFP face without them intending for this to happen.

ESFPs don’t find it easy to pretend or hide their feelings, but at the same time they try hard to be happy. ESFPs want to remain positive even when they are struggling or something is bothering them. They want to try and make themselves happy by looking on the bright side of things. When they are experiencing something deeply painful, the ESFP will struggle to put on this happy face and their emotions are often painted rather clearly in their behavior and expression.