Here’s How Often You Get Caught Up in Fads, Based on Your Personality Type 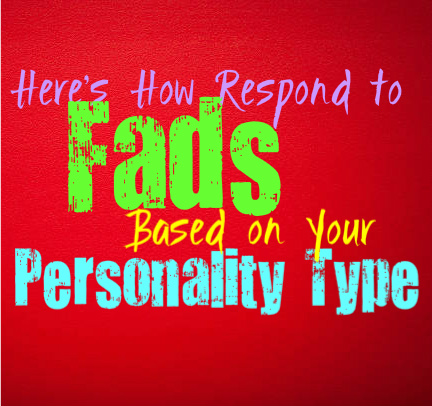 Here’s How Often You Get Caught Up in Fads, Based on Your Personality Type

While some people avoid fads like the plague, others are drawn to their hype. Here is how often you find yourself caught up in recent fads, based on your personality type.

INFJs really aren’t ones for paying attention to fads and prefer to follow what they sincerely enjoy. If the INFJ does get caught up in something considered to be a fad, they won’t simply drop it when everyone else does. This is because they are drawn to the things that speak to them on a deeper level, and like to feel connected instead of just a shallow interest. INFJs want to immerse themselves into something that they enjoy, and even like having loved ones to share this with. Fads rarely keep their attention, and the idea of something being popular usually isn’t appealing for the INFJ.

ENFJs rarely care much for fads, but they will pay attention if their loved ones care for them. They sincerely would rather focus on things that have a deeper meaning for them, and dislike anything shallow. ENFJs might pay attention to fads for the sake of those they care for, but rarely do they find sincere interest them. ENFJs want to make the people close to them happy and will do whatever they can to accomplish this. For the ENFJ it is more about connecting with the people they love, rather than paying attention to something simply because it is popular.

INFPs aren’t usually drawn to fads, but they do bounce around a lot. They simply like to pay attention to many different things since they can become bored so easily. For the INFP it is about discovering the subjects and hobbies that truly spark their passionate side. They want to find the things that hold a deeper and more sincere meaning for them, and don’t like focusing on anything shallow. Fads are often shallow and silly things which are fleeting and people only seem to be interested in them because they are popular. The definitely of a fad alone is something the INFP as little interest in.

ENFPs can sometimes pay attention to fads simply because they enjoy taking everything in. They don’t like missing out on something new, especially if they might become interested in it. ENFPs can often drop things rather quickly though, since they become bored easily. The ENFP enjoys fads because it gives them a chance to explore something new, and possible even master a skill in it before moving on. They don’t enjoy these things simply because they are popular, they just want to be able to soak up as much information as possible in order to find the things they are truly passionate about.

INTJs aren’t really fans of fads and are much more interested in substantial hobbies or subjects. INTJs are interested in learning as much as they can though, so they might find themselves at least taking time to research recent fads. They often like to be aware of just about everything, but rarely are they sincere drawn to fads. The INTJ likes to pay attention to things that are likely to last for a long time, and have some sort of deeper meaning or value behind them. Fads can often be a bit too shallow for the INTJ, and cannot truly hold their interest.

ENTJs aren’t often interested in fads, and rarely pay attention to them. Unless these things directly affect them and their work lives, the ENTJ won’t care much for anything so fleeting or shallow. They are more interested in things that challenge them to grow and learn more about the world. ENTJs aren’t shallow people and rarely find themselves caught up on the things that are popular or interested to others. They want to focus on hobbies that are more substantial and hold a deeper meaning for them.

INTPs can sometimes be drawn to fads, simply because they enjoy focusing on new things. They often like to predict which things will start to grow in popularity, and which things will simply be fleeting fads. For the INTP it is enjoyable to use their intuition to figure out which hobbies and different subjects will come into popularity, and they often find themselves drawn to these things before anyone else. INTPs want to explore new information and are constantly seeking to learn and understand as much as they can.

ENTPs are constantly bouncing around from one thing to the next, since they become bored rather easily. It seems more enjoyable for them to have many projects going at once, and often helps them be more effective at finishing some of them. ENTPs do enjoy paying attention to certain fads, simply for the novelty of it. They rarely find themselves following fads simply because they are popular, but they enjoy being able to observe and understand why others are so interested in them.

ISTJs aren’t really interested in fads, especially things that don’t feel substantial. If it seems like everyone is doing it, the ISTJ likely has suspicions about the situation. They would rather focus on things that seem valuable and long lasting. Anything fleeting seems a bit useless for the ISTJ and likely won’t hold their interested. They enjoy things that have been around for a while and have a sincere reasoning for being so well received.

ESTJs can sometimes be interested in fads, especially if it seems all of their loved ones are. They become interested in things that can excite them, but likely they won’t become fads for the ESTJ. If they truly like something that is popular they will find themselves interested in it long after others have moved on. ESTJs are often more drawn to proven methods and hobbies that are sincerely substantial. Anything that is fleeting often feels like a waste of the ESTJs time and energy.

ISFJs don’t like to be behind on things, and try to remain in the loop. They will often try to pay attention to fads if they are something their loved ones find interest in. For the ISFJ though, it is more rewarding to focus on things from the past. They are often very nostalgic people, who enjoy diving into hobbies that have been fulfilling for them for years. ISFJs are often only interested in fads because they want their loved ones to come to them for information and help on just about everything.

ESFJs can sometimes become interested in fads if it is something their loved ones seem drawn to. They want to make the people around them happy, so they will pay attention to whatever they like. ESFJs don’t like being left behind, simply because they want to be someone that others can turn to for anything. When it comes to fads the ESFJ likely doesn’t find them all that interesting, but they will try to if they feel it is necessary. They often find themselves drawn to nostalgic subjects, and will hold onto things long after they have lost popularity.

ISTPs live very much in the present moment, so occasionally they can become caught up in fads. This isn’t because they are drawn to what other people like, but simply because they enjoy things that are new. ISTPs might find the idea of fads to be a bit annoying though, and will try not to let themselves get too caught up in them. At the same time they want to be able to explore their surroundings and don’t like getting stuck in the past.

ESTPs can something get caught up in fads, simply because they enjoy things that are new and exciting. They like to bounce from one thing to the next, since they become bored somewhat easily. For the ESTP it is about living in the present and soaking up everything they can around them. They often enjoy things that are popular, and get drawn to the hype of whatever fad in currently the big thing. ESTPs also like being up to date on everything, and dislike being left in the dark.

ISFPs can sometimes find themselves caught up in the fads, especially since they are such passionate people. They want to be up to date on the things that are popular, and even like being a little bit ahead of everyone else. ISFPs often want to be the person who brings in the new hyped thing, in order to bring value to their loved ones in some way. ISFPs simply enjoy exploring anything new and exciting, even if they lose interested after a little while.

ESFPs can definitely get caught up in fads, simply because they are hip people who don’t like getting left behind. Many ESFPs are the ones who create the fads and even popular trends, and enjoy being able to be ahead. They are interested in things that are popular because they like to connect with those around them, and enjoy getting to know what everyone is drawn to most.