Are You Likely to Be a Flashy Person, Based on Your Personality Type 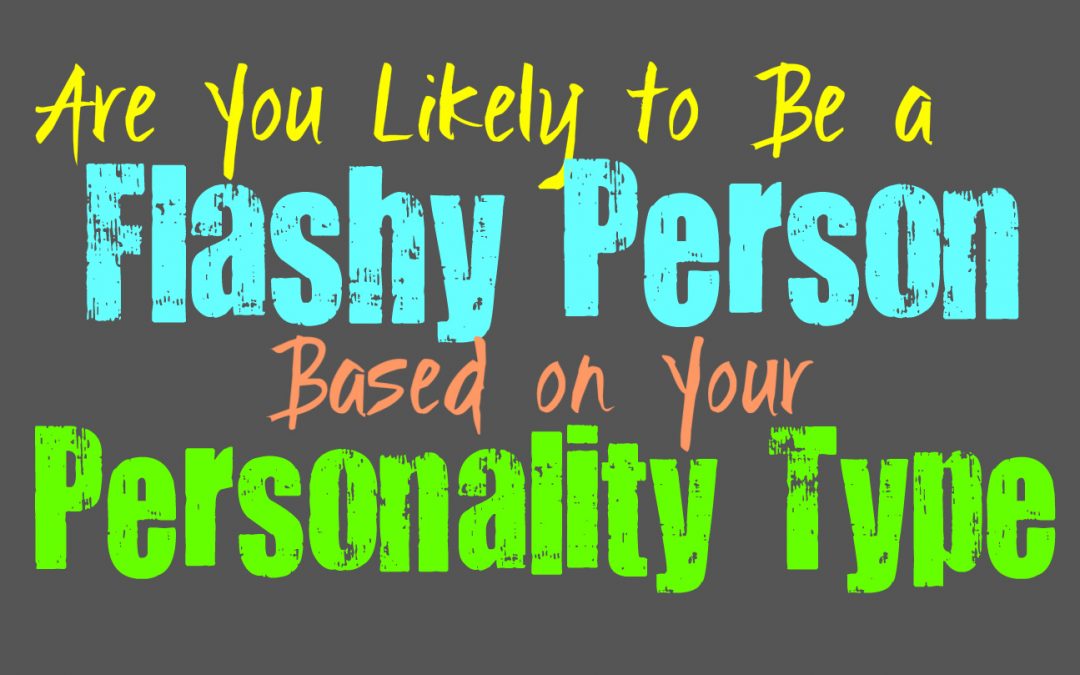 Are You Likely to Be a Flashy Person, Based on Your Personality Type

Some people have a way of being rather flashy and in the open with their behavior, while others prefer to keep things quieter and more to themselves. Here is how likely you are to be a flashy person, based on your personality type.

INFJs are not usually flashy people, especially not around new people. They usually keep to themselves and don’t feel comfortable being too over the top with things. INFJs might be capable of being flashier people around their loved ones, but this usually isn’t part of their natural personality. They might enjoy more lavish things and can certainly be expressive around the right people, but in most situations they are the opposite of flashy in their behavior and in the things they enjoy.

ENFJs can actually be flashy people sometimes, since they enjoy being able to show the things they like and express their accomplishments openly. ENFJs do enjoy being able to be a bit flashy if they want to be, since they don’t like feeling forced to be reserved people. ENFJs are outgoing and friendly individuals who really just want to work hard and be able to enjoy themselves. When the ENFJ is proud of something they might be a bit flashy about it, since they don’t want to keep it to themselves.

INFPs aren’t often flashy people, but there are times when they express themselves in this way. INFPs are expressive people and so having to hold things in for the sake of others can be a bit stifling. If there is something the INFP feels very strongly about, they might express themselves in a way that can seem a bit flashy. They might even find themselves drawn to fashion or things that appear flashy to others, but for the INFP it is just about it being personal and showing who they are.

ENFPs can sometimes be flashy people, simply because they know what they like and aren’t afraid of expressing this. They enjoy being open with what they are passionate about, and sometimes this can come across as a bit flashy. For the ENFP it isn’t about trying to be in other people’s faces, it is simply because they find it stifling to have to hold back who they are. ENFPs are passionate and outgoing people, who sometimes enjoy being a bit flashy when they are expressing a part of themselves.

INTJs aren’t flashy people most of the time, since they can be seen as somewhat internal and reserved. With most things like their sense of fashion and décor, INTJs aren’t usually flashy in a way that can be a bit over the top. They do sometimes enjoy owning things which might appear flashy to others though, especially when it comes to technology or certain equipment. For INTJs it isn’t about being flashy, it is just about having the things they want and working hard to obtain them.

ENTJs can have a flashy side sometimes, since they enjoy being able to express the things they are proud of. When ENTJs are excited about something or are proud of their accomplishments, sometimes they can appear a bit flashy. They just don’t like having to restrain themselves if they have something they are excited about or truly want to share with those around them. When ENTJs are pleased with themselves sometimes they can be flashy with the way they express this.

INTPs really aren’t flashy people, especially with how they express themselves outwardly. They can be rather internalized people and don’t like expressing themselves in a way that others can see. INTPs can be a bit reserved most of the time, since they don’t easily express themselves to others. They keep most things inside and don’t often strive to stand out or be flashy around others. While they might not be outwardly flashy people, they might be a bit curious about expressing their passions around the right people.

ENTPs can sometimes be flashy people, especially when they are passionate or excited about something. They don’t like feel restrained or restricted, and so sometimes they can express themselves in a somewhat flashy manner. They are outgoing people who enjoy being able to go after what they want and really experience new things in life. This can cause the ENTP to appear flashy, especially if they are doing this intentionally to see how people will respond to them, or see how they personally feel about this behavior.

ISTJs really aren’t naturally flashy people, since they prefer to focus on things that are more practical. Being flashy and over the top means drawing attention to themselves, and this isn’t something ISTJs are usually interested in. They prefer to focus on getting things done and are truly hardworking and focused people. They don’t want to let things stand in their way, and are often much more practical and reserved most of the time.

ESTJs don’t like being too flashy, especially if it is done in a way that feels foolish to them. They don’t mind being flashy when they are expressing something they are proud of though, and often enjoy being able to express this to others. ESTJs work hard for their accomplishments and so they do sometimes enjoy participating in flashy things which showcase what they have been able to achieve. While they can sometimes be flashy in these ways, ESTJs don’t want to be over the top in a way that is embarrassing or openly flashy.

ISFJs can be rather practical and reserved people, and so they don’t often want to be seen as flashy. For them it can seem a bit selfish to be overly flashy with how they express themselves or share with others. They can sometimes keep things to themselves, since they don’t want to do anything that might hurt their loved ones or overshadow them in any way. For the ISFJ it is better to be able to keep to themselves and work on being someone others can trust and rely on.

ESFJs don’t like being too over the top, but there are times when they might be a little bit flashy. For them it often depends on how it will make others feel, since they seek to please their loved ones. When the ESFJ wants to impress their loved ones, they can sometimes be a bit flashy for the sake of making the proud. They enjoy being able to connect with others and sometimes this means expressing themselves in way that might seem a bit flashy.

ISTPs aren’t often flashy people, simply because they keep to themselves most of the time. If there is something they feel like expressing in a flashier manner, they won’t be afraid of doing this. They simply don’t’ feel drawn to these things most of the time, especially since they can spend a lot of time inside of their own minds. For the ISTP it entirely depends on what they are passionate about, whether or not they will be flashy people.

ESTPs can be occasionally flashy people, especially when they are passionate about something. They enjoy expressing themselves and sometimes this means being over the top at times. They are adventurous people who enjoy being able to go after the things they want and sometimes express themselves in flashier ways. While ESTPs aren’t always intentionally flashy, they simply are drawn towards certain things and don’t like having to pretend otherwise for the sake of people around them.

While ISFPs can be internal or even occasionally shy people, they can also be a bit flashy sometimes. They are expressive people who don’t like feeling like they have to keep things inside. And so they can be rather flashy with how they express themselves, sometimes with their fashion sense as well. ISFPs just do what feels right for them, even if that means being a little bit flashy in order to express themselves and share this with those around them.

ESFPs can definitely be flashy people, especially when they are excited about something. They enjoy being a bit over the top most of the time, simply because they are open and expressive people. ESFPs don’t like feeling held back or forced to keep things inside, and so they wear their hearts on their sleeve. Because of this desire to be open and express their passions, ESFPs really can be rather flashy and over the top people.