Here’s How Silver-Tongued You Can Be, Based on Your Personality Type 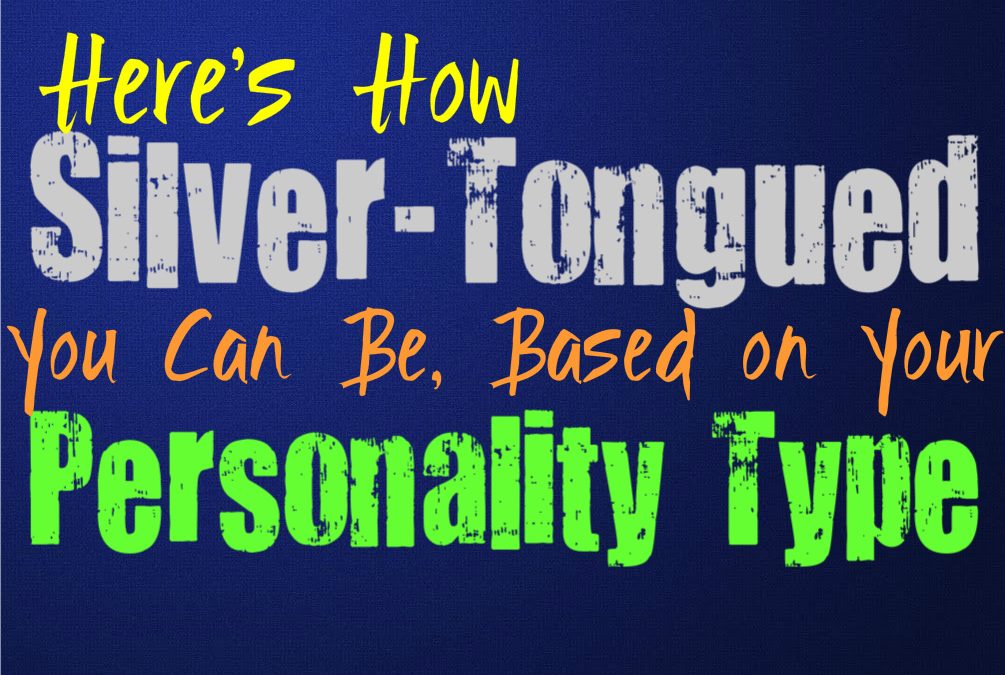 Here’s How Silver-Tongued You Can Be, Based on Your Personality Type

Some people are naturally skilled with their words to a point where they can convince anyone of pretty much anything. This is more than simply being charismatic, it is a combination of many talents which make someone a “silver-tongued devil,” sort of speak. Here is how silver-tongued you can, based on your personality type.

While INFJs are often viewed as internal and reserved people, they are excellent at choosing their words wisely. The INFJ is often known as a chameleon, capable of adapting to many different situations. Because of these many different skills, the INFJ definitely possesses a silver-tongue. They can read the energy and emotions of those around them, helping them to discover exactly how to convince them of just about anything. INFJs can often read deep into the soul of others, and will be able to make their words rather believable because of this.

ENFJs definitely possess a silver-tongue, especially when this is their intentions. They know how to convince others of just about anything, and are rather charming people. ENFJs have a strong awareness of the emotions of others, which helps them understand exactly how to communicate with them. ENFJs are chameleons, capable of adapting to each person and situation. This helps them learn how to be more convincing, and how to charm someone without them even understanding it is happening. ENFJs certainly possess the silver-tongue, but in most cases they try to use this for positive reasons.

While INFPs can be very charming at times, they aren’t ones to twist their words for the sake of being convincing. They might be capable of possessing a silver-tongue but most INFPs will find this immoral in some ways. They would rather be sincere and upfront with people, instead of working to convince them of something that isn’t entirely truthful. INFPs strive to fulfill a sense of good and kindness for the world around them, and dislike doing anything that goes against their inner morals. For the INFP it is more important to be themselves, without any sense of reservation or doubt.

ENFPs are definitely silver-tongued, with a natural ability to charm others. Not only are ENFPs charming, they are often excellent at convincing people of just about anything. They are capable of being very smooth with their words if they so wish it. While ENFPs don’t always enjoy being this way, they can definitely utilize these skills if they feel like they need to. If the ENFP is in a situation where they need to convince someone of something in order to get what they truly want, then it will often come very easily for them.

INTJs are often very direct and to the point people, and don’t like having to dance around things. For the INTJ it is better to be honest and straightforward rather than having to come up with the perfect words to convince people. For the INTJ being silver-tongued often feels like an exhausting waste of their time and energy. While they might be capable of convincing others and finding ways of being charming about it, the INTJ wants to communicate with people who can understand and appreciate their direct and sincere truth.

While ENTJs are often more focused on speaking the truth and being direct, they can be a bit silver-tongued at times. If the ENTJ truly wants something, they will often execute everything in their power to make it happen. They can certainly go out of their way to be convincing, and will do whatever it takes to accomplish their goals. ENTJs are good at operating around people, and have a strong demeanor which often gets them their way. While ENTJs are normally seen as direct people, they can definitely be silver-tongued.

INTPs are often more internal people, who dislike having to come up with the perfect words. They aren’t fans of having to be convincing, which is why they aren’t often seen as silver-tongued. The INTP would much rather focus on learning and growing, and only enjoys expressing things to people who can understand them to some extent. The INTP can sometimes find themselves getting tripped up with their words, since their thoughts are extremely internal. For them having to be quick-tongued and convincing can be a bit too much pressure and feels like a waste of their time.

ENTPs can certainly be silver-tongued, they might even be where the term originated from (yes, I am making this up). In truth they know their way around people and can often convince them of just about anything. ENTPs can express themselves in such a charming and sincere sounding manner that is become hard not to believe them. They know how to communicate with others and can often discover the best way to convince them of just about anything they please. ENTPs wit and charm often helps them get away with anything.

ISTJs are very direct and sincere people, who prefer not to pretend around others. They aren’t often seen as silver-tongued individuals, simply because they are precise and to the point. ISTJs can definitely be charming and lovable people, they just aren’t interested in pretending for the sake of others. They are more interested in getting things done and being as efficient as possible. Instead of trying to convince others of something with charm, they will speak their truth and provide facts.

ESTJs aren’t often seen as silver-tongued people, but they do have this ability within them. Most of the time the ESTJ is aggressive and direct, simply striving to get things done. They are always pushing forward and work hard to be as efficient as possible in everything they do. If the ESTJ wants something they fight for it with everything they have, and rarely allow anything to stand in their way. While ESTJs aren’t often seen as silver-tongued, they can be rather charming people.

While ISFJs are often see as reserved and internal people, they do possess a silver-tongue at times. When the ISFJ wants to be convincing in order to smooth over their situation, it is something they are often very skilled at. ISFJs dislike any disruption of harmony in their environment, and will certainly go above and beyond in order to calm this. The ISFJ will often find ways to convince others of things in order to maintain this balance and keep everyone happy.

ESFJs actually can possess a silver-tongue, since they understand people very easily. They have a strong sense of the emotions and desires of those around them, and can often see deeper than people realize. Because of this natural ability, ESFJs often understand how to communicate with just about everyone. They can adapt their tone and their behavior in order to please the people they meet. This helps the ESFJ become very convincing when they want to be, and they can often find just the right words in order to get their point across.

ISTPs are seen as independent people who like to keep to themselves most of the time. While the ISTP is often on their own, they still know how to interact with people rather well. ISTPs have a rather charming personality, which helps them convince others of things when they want to. They can definitely possess a silver-tongue and often can figure out just the right tone and words in order to be very convincing to those around them.

ESTPs absolutely possess a silver-tongue, and are naturally very charming people. If the ESTP wants to convince others of something it often just takes a bit of adapting to their surroundings. They also have a seductive nature which can certainly be beneficial when it comes to being convincing. ESTPs are definitely silver-tongued individuals, who enjoy being able to choose their words and their tone wisely in order to get their way.

ISFPs definitely enjoy being able to connect with others and speak to them in a way they understand. While they enjoy being able to convince people of things, ISFPs rarely want to be insincere in order to do this. They have a natural charisma which helps them, but the ISFP is often very honest and upfront with people. For them it is more important to be themselves than to always be charming others in doing things for them.

ESFPs can definitely possess a silver-tongue, especially when they want something. They often do whatever it takes to get the things they want and won’t allow anything to stand in their way. If the ESFP has their heart set on something they will be both charming and convincing in order to get it. If the ESFP needs assistance they can often find ways to coercing people into believing them, and find ways to gain the help they need.