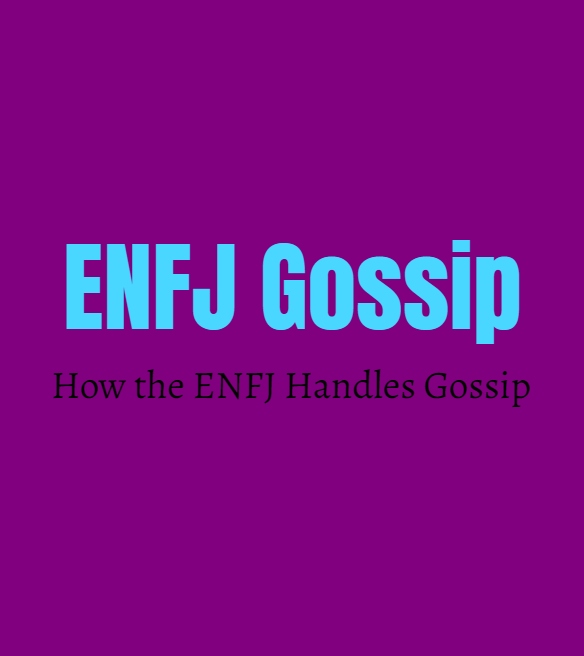 When it comes to dealing with gossip the ENFJ does sometimes get themselves into sticky situations. They might be viewed as someone who gossips, simply because of their interest in other people. Their intentions are often much different than it appears, since ENFJs are curious about those around them and want to find ways to help them out. They don’t like anything which might be harmful to others, since they are very focused on the emotions of those around them. For the ENFJ it is a more complex subject than simply saying they do or do not gossip. It is important to understand the layers of the ENFJ and what makes them feel the way they do, and how they will judge each situation differently.

ENFJs don’t really like being viewed as a gossip, but they do find themselves drawn to it sometimes. This is because they are naturally interested in learning more about people, as this is one of their main focuses in life. ENFJs care about helping people and will naturally want to learn about what they like and who they are inside. When someone they care for isn’t divulging important information, they might want to find other means of digging up the details. This leads the ENFJ to gossiping at times, in hopes of having people share information which might help them. It is not intentionally and rarely is it done in malice, they simply want to continue learning about this person and how they can help them.

ENFJs are also rather outgoing people, and so sometimes this puts them in situations they would not intentionally seek out. They might end interacting with a group of people and their sense of empathy puts them into their shoes. If those friends have a tendency to gossip then the ENFJ might start to participate in this without even realizing it at first. It isn’t something they necessarily are proud of or enjoy, and if it becomes mean-spirited they are likely to become upset. ENFJs will defend their loved ones if someone is saying bad things about them, but if the conversation is harmless then they don’t always know how to set those boundaries. They enjoy talking about people and learning more about them this way. Sometimes it is just about talking that person up and discussing all of the things going on in their lives. In other situations it might be coming from a place of concern, especially if the ENFJ wants to try and help them. They care about improving the lives of their loved ones, and so they might end up talking about them to others because they are seriously worried. This is something which can appear to be gossipy to others though, and the ENFJ can get themselves into trouble without meaning to. For them it really isn’t about trying to gossip or talk badly about someone, they just find it more natural to share their feelings about a person and might even vent about the fact that they are concerned for them. Being someone who is naturally connected to people and enjoys analyzing them and understanding their emotions, the ENFJ does end up pulled back to conversations about other people. The intention is certainly not to be a gossip, as the ENFJ doesn’t do this in order to stir up or create drama, but it does happen from time to time. Their sometimes nosy qualities do make them seem like they are gossiping, since they will ask questions and try their best to learn about the people in their lives.

Rarely will the ENFJ gossip negatively about someone, especially to people they don’t trust. There are instances though where if they don’t like someone or if that person has spoken badly about a loved ones, the ENFJ might be more prone to gossiping about them. They are outgoing and social people, and if they strongly dislike someone because of their actions they might actually find themselves venting this out in ways which seem to be gossiping. If a person hurts the ENFJs loved ones then they do become much more vicious towards them. They might gossip to people because they want to make sure others don’t trust this person as well.

ENFJs do have trouble with boundaries, especially with setting them for other people. They don’t really know how to be firm about these lines and they can often blur because of this. Even if the ENFJ intends to have some sort of line or boundaries, they find that in the moment the emotions of those around them can dictate their choices much more easily. When it comes to gossiping the ENFJ often wants to set some sort of boundaries, but they don’t really find it easy to do this. This is why they can sometimes find themselves in situations where they start discussing other people and it may turn into gossip without them wanting it to go down this path. ENFJs often dislike gossiping which is slanderous or harmful, but when it comes to something with more positive intentions they don’t always know how to draw the line. They care about people and their desire to help them and learn more about what they need, can make it hard for them to find the lines they shouldn’t cross.