ENTP Under Stress (Shadow Mode): The ENTPs Unhealthy Dark Side 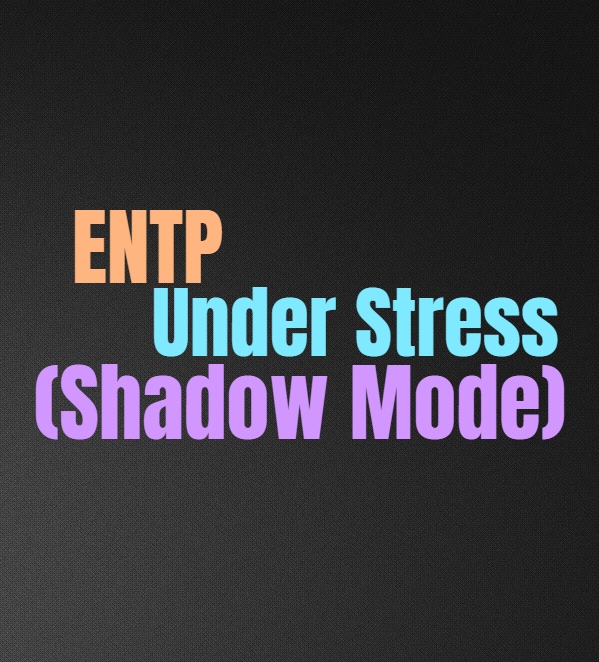 ENTP Under Stress (Shadow Mode): The ENTPs Unhealthy Dark Side

ENTPs can often handle a certain amount of stress, since they do thrive on challenges and experiences. They enjoy being able to dive into something which gives them new opportunities to grow and learn, but it is different when they undergo extreme stress. Serious stress which is constant and unending can be overwhelming for even the strongest of people. When this occurs many people go into their shadow, causing them to respond and act in ways which are entirely different from their normal behaviors. For the ENTP it may take a lot of stress of trauma to create this response, but it does ultimately cause them to behave much differently from the norm.

The dominant function of the ENTP is their Ne or extraverted intuition. This causes the ENTP to see various patterns in the world around them, and they derive certain connections from what they see. This helps them to figure things out and problem solve in truly useful and unique ways. Their Ne also helps the ENTP to be rather creative and often insightful people, capable of looking at things from so many different angles. They don’t just see what is obvious and right in front of them, instead they are capable of seeing things which aren’t so obvious. ENTPs enjoy experiencing new things, and can become bored with stagnancy. This comes from their Ne which can draw them in so many different directions, sometimes finding it difficult to focus on just one thing at a time. This is often why the ENTPs mind is so active, especially when combined with their auxiliary function.

The auxiliary function of the ENTP is their Ti or introverted thinking. This allows the ENTP to take everything in and analyze this inside of their own internal thoughts system. It helps the ENTP to look at the different angles and facts, but also to analyze these patterns in hopes of problem solving in unique ways. The ENTP doesn’t require constantly using proven methods in order to figure something out, instead they can often do this in their own ways. They want to find new means of finding solutions, and sometimes these new ways and truly beneficial. The fact that they aren’t afraid of thinking outside of the box is what makes the ENTP capable of discovering things others would not have.

The tertiary function of the ENTP is their Fe, or extraverted feeling. For the ENTP this often makes them rather charming people, who are capable of connecting with others easily. Their sense of understanding of others isn’t necessarily their main focus, but they do have a better idea of the feelings of others than most other thinking personality types. They can often get a better sense of what people want, and are capable of giving this to them. ENTPs focus more on logic than emotions, but that doesn’t mean they are incapable of being compassionate towards others. This is what lends to the ENTP charming nature and makes them often very likable people.

The inferior function of the ENTP is their Si or introverted sensing, which is not expressed the same for the ENTP as it would be for someone who uses Si as their dominant function. For the ENTP this is often expressed by making the ENTP good at remembering certain details and facts, especially ones which are useful to them. It also can cause the ENTP to be a bit nostalgic at times, remembering past events and times which they were truly happy in their situations. They might not reminisce about this often, but it is often a much more internal feeling which the ENTP will experience from time to time.

ENTP in Their Shadow

The dominant function for the ENTP is normally their Ne, but when they are in their shadow it becomes their Ni. Instead of focusing on patterns and things they can conceptualize, the ENTP starts to focus on “feelings” and hunches. They find themselves getting inspiration about future predictions, in ways which don’t really connect. Instead of seeing the patterns around them, they try to search for theories and gut feelings inside of them, which are more from paranoia than from logical thought. The normally logical and intuitive ENTP, starts to question things and second guess themselves in less useful ways. This behavior can become a bit toxic, because they find themselves doubting people and facts in ways they normally would not.

The auxiliary or second function of the ENTP shifts from their Ti, to them attempting to use Te (extraverted thinking). The ENTP normally looks inward for processing information and analyzing facts, instead they start to look elsewhere. They may become harsh in their delivery, acting aggressively in order to get things done. Instead of learning from mistakes the ENTP starts to become afraid of failure, feeling frustrated if things don’t go perfectly. This can cause them to be impatient with others, less capable of understanding where they are coming from since they seem solely focused on “facts” and details which normally would not matter to them.

Instead of using Fe the ENTP starts to lean towards Fi, but this doesn’t present itself in the most healthy of ways. Often this Fi can turn inward, causing the ENTP to second guess their own morals and abilities. It often becomes about blaming themselves and others, struggling to really see things from different angles. They find themselves struggling to trust in themselves and in others, and become a bit more inward about their choices. The ENTP starts to have issues believing people, and feel this need to focus only on themselves and their own needs.

The ENTPs inferior function because Se, instead of their normal Si. This causes the ENTP to search for things in the physical world, but they may find themselves struggling to do so. Wanting to be capable of connecting with things in the physical sense may cause the ENTP to feel frustrated with themselves since this is not normally how they would approach things. While extraverted sensing makes most people very in touch with the physical world and the present moment, it can cause the ENTP to stress over these connections and find themselves wanting to act impulsively and defensively.

For the ENTP going into their shadow often occurs because they are in times of extreme stress. They have certain challenges with have threatened their normal ways of processing things, and they become doubtful that they can get the job done this way. It occurs because they have experienced this pressure for a long period of time, and their actions have been unable to really fix the problems in front of them in a useful or healthy manner. ENTPs normally are problem solvers, but in this case they are likely struggling to see a way out. Since they cannot seem to find solutions they naturally turn to their shadow mode, hoping that this different behavior can fix the struggles in front of them.

When the ENTP is under this stress for a long time and cannot seem to break away, sometimes changing their scenery is a good solution. They need to escape the things which are dragging them down and forcing them into their shadow self. The ENTP will not be happy like this for a long period of time, and so they really need to find an escape in order to become like themselves once again and find that healthy balance they are missing.