The Different Flirting Styles of Each Myers-Briggs Type 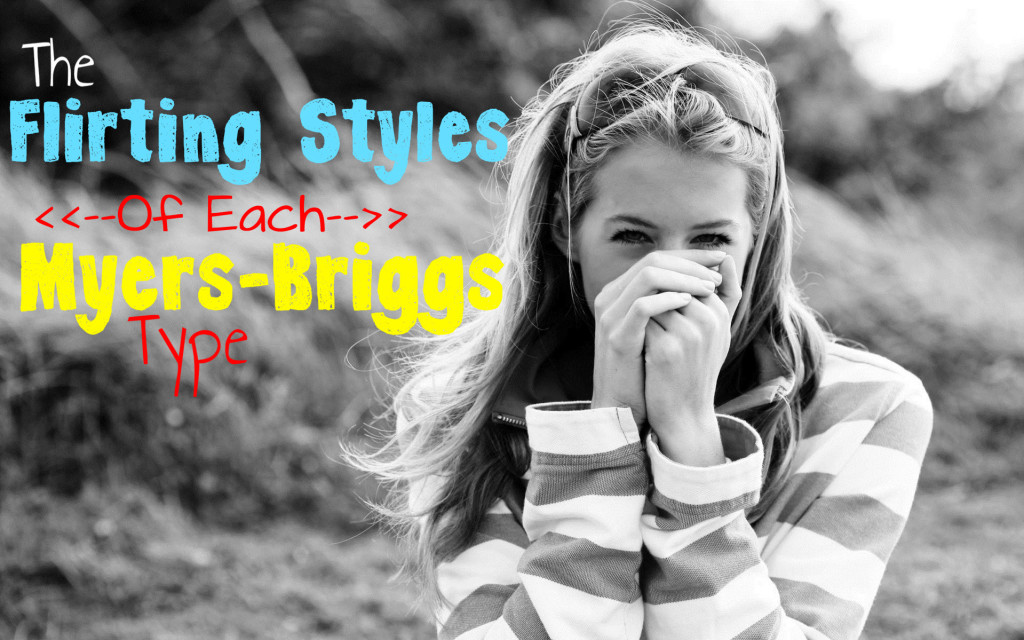 The Different Flirting Styles of Each Myers-Briggs Type

Some people are natural flirts, while others are more reserved and shy. There are many different styles of flirting and here is how we believe you flirt according to your personality type.

INFJs are naturally skilled at understanding others, and because of this have a natural appeal to others. Although they are likable and alluring individuals, they often feel awkward when it comes to flirting with someone that they have true feelings for. When the INFJ is natural and relaxed they may find that people believe they are flirting with them, when in fact they are just being gracious. If the INFJ finds themselves developing feelings for someone, they may become awkward and feel like they do not know how to flirt. The second they begin to think about their flirting, it might cause them to freeze up and doubt themselves. If the INFJ is natural and doesn’t think about their actions, they will be naturally skilled at flirting. INFJ attempt to take interest in the person that they like and will learn as much about them as possible.

ENFJs are naturally skilled at flirting. ENFJs friendly and outgoing nature can sometimes be seen as intentionally flirting by others, when they are just being generous. They enjoy flattering others and attempting to make people feel good about themselves, this can sometimes be perceived as flirting. They are very social individuals and enjoy light flirting with people, as a way to build them up. They are often bubbly and fun to be around. When an ENFJ seriously likes someone they are not afraid to go for it. They may feel nervous, but often appear much more collected than they realize. They attempt to find ways to show the person that they like how perfect they are, and just how capable of caring for others that they are.

INFPs are often very skilled at flirting online, but can become nervous when body language is brought into the situation. They are pretty good at understanding other people can may become nervous if the sense that the other person is nervous as well. They have a natural way about them that is often appealing and comforting to others. If the INFP is able to relax and be themselves than their sense of humor will be able to shine through. INFPs may find themselves capable of using their sometimes awkward flirting styles in their favor. Their honesty is often a very refreshing quality that they can use to keep people interested. INFPs are not incapable of taking charge, and if they truly like someone they are often willing to take chances.

ENFPs are often perceived as very open and flirty individuals. They find it very easy to connect with people and are good at taking an interest in others. ENFPs are bubbly and social individuals and have a natural energy about them that makes others comfortable. ENFPs may have a tendency to tease someone that they truly like, which can sometimes rub them the wrong way. The playful nature of the ENFP makes the teasing come from a place of fun and attraction. They truly only find themselves comfortable enough to tease the people that they like.

INTJs may not be the best at the flirting game itself. They prefer being more direct and aware when it comes to who they like. They don’t mind telling someone that they are interested in them, and would prefer that person do the same. They may find themselves stuck in a strange limbo when it comes to flirting attempts. The INTJ may either be too coy causing the object of their affection to be entirely unaware, or may go a little too far causing that person to become withdrawn. The INTJ might find themselves distrusting of other people’s flirting, and find it as a form of manipulation. INTJs work best when they are being upfront, giving them a chance to share their minds with someone. Their best way of flirting is just by a show of their intelligence, which will likely intrigue their love interest.

ENTJs are very natural at flirting. They have a way of being very social with others and are good at playing up their strengths. They are skilled at selling themselves to people and gregariously expressing their enjoyable sense of humor. They often prefer to initiate the flirting, since other people approaching them who they are not interested in, will annoy the ENTJ. When they do like someone they are often very aware of this, and will find skillful ways to get to know this individual. They aren’t the most comfortable with their own feelings, but once they come to terms with them are very good at attracting their love interest. ENTJs are expressive and enticing flirts, with a skill for making their larger than life personalities shine.

INTPs are not the most stereotypically romantic types, but they do have a unique flirting style. They often will take an active interest in the person that they have feelings for, and will find a way of helping them solve their problems. Their critiques may come across the wrong way, but they are actually coming from a place of interest. The INTP may express their passions to someone as a way to flirt with them. Sharing their intelligence and their abilities in an attempt to seem appealing to the object of their affection. They often have a feisty and playful flirting style, and might attempt to tease the person. They may not be the one to display affection in grand romantic gestures, but they will be playful, sarcastic and attempt to reach that person on an intellectual level.

ENTPs are often very flirty individuals because of their playful and social nature. They enjoy challenging others and seeking to explore exciting conversations. They may be seen as flirt to most anyone they speak to, because they have a natural way of becoming the center of attention. ENTPs are often very social and outgoing and have a larger than life presence. They enjoy being playful and poking at people as a way to keep them interested. They are often very skilled at flirting and know how to keep others interested. They often use humor as a way of flirting, and can be sarcastic and adventurous.

ISTJs do not have an interest in flirting unless it is with someone they truly like. They don’t feel comfortable flirting with just anybody, and reserve those attempts for someone that they have feelings for. ISTJs attempt to flirt by taking an interest in the person that they like. ISTJs are polite individuals and that can sometimes appear like they are flirting, when in fact that is not their intentions. ISTJs do not consider themselves very flirty, and are more traditional in their courting methods. They probably do best with people who approach them, not the other way around.

ESTJs often use boasting as a way of flirting with others. Talking themselves up and showing just how likable they are, is the way in which they attempt to attract someone. ESTJs are not at all afraid of showing interest in someone, and often have a very take charge attitude towards someone that they like. They may become teasing and attempt to play hard to get, but will often adapt to the other persons interests. They enjoy feeling like they are in control and are capable of drawing others into their web. When they like someone they will take an interest in them and will not be afraid of showing it.

ISFJs attempt to make the person they are flirting with feel comfortable. They will show them little ways in which they appreciate them and attempt to laugh at all their jokes. ISFJs are not the most forward individuals, but are good at expressing their interest in a subtle way. They may attempt to make physical contact and use affectionate body language to express their interest. They are rarely direct, and will wait for the other person to make the first official move. Although they can be shy, they are very skilled at reading other people emotions, making them skilled at flirting.

ESFJs are very social and caring individuals, which can make them come across as more flirtatious than they intend. They enjoy complimenting others and making them feel good about themselves, which can be seen as flirting. When an ESFJ is intentionally flirting they may use subtleties to attract someone. They attempt to show their popular and likable nature and will work to prove their appeal to the person that they like. The ESFJ will definitely attempt to use body language, and may be much more physically affectionate towards their crush. They will attempt to make the other person feel at ease, and will probably laugh at all of their jokes. The ESFJ is not afraid of flirting, but does not like to make the first move. They will attempt to show their interest in someone by flirting, but may not take a more direct approach.

ISTPs are very focused and internal individuals and do not like their own space being invaded. ISTPs are often not obviously aware of their own flirty tendencies. They are often seen as flirtatious by others, when truly that is just their attempt at being friendly. They have a charming personality that causes people to be naturally drawn to them.  ISTPs may enjoy the excitement of flirting with someone, or enjoy adapting it as a skill. When it comes to someone they truly like they may find themselves being sarcastic or teasing towards that person.

ESTPs are very charismatic individuals and often have a natural flirting ability. ESTPs will be very outgoing and playful towards someone that they like. They are social and fun individuals and have a way of keeping others on their toes. They may attempt to show just how exciting they are and are often very good at playing games. They know how to keep people interested and often enjoy the push and pull of flirting.

ISFPs can sometimes be very shy individuals, making it hard for them to express when they like someone. They are fun to be around and are naturally good at flirting with people they aren’t strongly interested in. With people they enjoy being around the ISFP is good at showing compassion and making others enjoy the present moment. If the ISFP has strong feelings for someone they may clam up and have a hard time outwardly flirting. There is a natural aura about the ISFP that often makes others feel compelled to approach them.

ESFPs are very outgoing and fun individuals. They are naturally very flirty and love helping other people learn how to enjoy the present moment. They are natural entertainers and may use humor or excitement to draw attention to themselves. ESFPs are rarely nervous, even with people that they like. They are naturally fun and spontaneous individuals and are very willing to take chances in love. They see no harm in going for what they want, and are able to express their interest very easily.

The Unique Energy of Each Personality Type

How Each Personality Type Responds To Nature

The Competitive Nature of Each Personality Type

The Sense of Humor that Each Personality Type Possesses