Here’s How Good You Are at Mimicking, Based on Your Personality Type 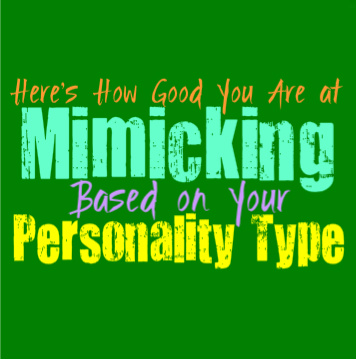 Here’s How Good You Are at Mimicking, Based on Your Personality Type

INFJs can actually be great at mimicking certain behaviors, especially since they are so empathetic. They can naturally connect with the way other people respond or act in a situation and can definitely mimic that. They can often be considered chameleon-like, because of their ability to adjust their behavior in pretty much any way they desire. INFJs don’t often enjoy doing this, but sometimes it is the best way for them to get some peace and alone time. Most of the time they behave differently in front of people because they don’t feel comfortable exposing themselves.

ENFJs are often excellent at mimicking others and can pick up on behaviors they see. They are empathetic people which is what helps them to connect with others and understand them and their behavior. ENFJs are extremely adaptable and can often adjust based on their environment so that they can blend in perfectly. ENFJs don’t always like doing this, but at the same time they aren’t comfortable exposing everything about themselves to others. They would rather have certain people in their lives who they trust enough to be themselves with, instead of being completely open with everyone.

INFPs aren’t really great at mimicking, simply because they are more comfortable being themselves. Having to behave differently than they naturally would is something that makes them feel like they are being insincere. While INFPs can sometimes withdraw certain parts of themselves since they aren’t comfortable being completely open with some strangers, that doesn’t mean they will mimic others. INFPs simply have a hard time pretending to be something others than who they are, and really don’t like having to mimic others.

ENFPs are charming people who are often seen as a jack of all trades. They might develop the ability to mimic certain behaviors, but only in a minimal sort of way. They don’t like pretending to be someone else, and might feel like too much of this behavior is completely fake. One of the worst things to the ENFP is being fake or insincere, and this is often seen as a great insult to them. They believe in being themselves, and aren’t comfortable behaving like someone else in order to get a specific response.

INTJs are researchers, who constantly try to improve and learn as much as they can. Sometimes this means observing the behaviors of others, which does help them become more capable of mimicking. They don’t do this from a sense of empathy, more from a standpoint of learning from what they see. INTJs can mimic if they feel like it is completely necessary for them to do so, especially if it will help them progress in a given situation. Other than that INTJs do prefer to be themselves and become drained by having to mimic other behaviors.

ENTJs pay attention and observe others and their surroundings, which does help them mimic at times. They will find a way to mimic certain behaviors in order to adapt, especially if this is what they need to do in order to progress. ENTJs believe in going after their goals without allowing anything to stand in their way, which means they will develop skills that they need in order to get the job done. ENTJs can sometimes be capable of mimicking certain behaviors in order to adapt and blend in, but most of the time they try to avoid this.

INTPs aren’t always great at mimicking outright, but they do like to observe and pick up on the behaviors of others. They might struggle to act a certain way, since it isn’t easy for them to express emotions outwardly. They will sometimes try to pay attention to behaviors in order to mimic them, but it might come across a bit more lacking in expression than it does from others. While INTPs do feel things very deeply, they simply don’t naturally express them in a way that most people recognize.

ENTPs are often good at observing the behavior of others so that they can mimic certain traits. They sometimes do this just to see if they are capable of it, and like to challenge themselves in this way. ENTPs try to adapt to certain situations so that they can get a better experience of their surroundings and really dive in. ENTPs don’t mind adapting in order to see how far they can go, they simply like being able to push themselves in this way. They can often mimic others since they are good at connecting with them and trying to understand where their behavior comes from.

ISTJs aren’t really interested in mimicking others, and so they rarely do this. They prefer to be themselves and be sincere about what they want and how they act. For the ISTJ mimicking someone else can feel like being completely fake and simply acting in order to impress others. This isn’t the way ISTJs like to conduct themselves, since they prefer to be honest and sincere people in just about everything they do.

ESTJs aren’t really fans of having to mimic others and might feel like this is a waste of their energy. They don’t like having to pretend in order to feel accepted by others. ESTJs would rather be honest and upfront about who they are and what their goals are. They will push themselves to get things done and will simply work hard in order to accomplish things. Instead of mimicking, ESTJs would rather get things done by being efficient and straightforward.

ISFJs are good at understanding others and picking up on certain behaviors. Their ability to connect with the emotions of others really helps ISFJs be more capable of mimicking in order to blend in. While ISFJ prefer to be honest and be themselves, they can find ways of adapting to their surroundings. They often do this in order to maintain a sense of peace and harmony in their environment. ISFJs don’t like doing anything that might disrupt the peace, and would rather find ways to create a sense of calm.

ESFJs are definitely capable of mimicking the behavior of others, and this comes from their natural ability to empathize. They can connect with people and are good at finding ways to understand them and pick up on their responses. ESFJs can use these abilities in order to mimic others so that they can blend in when they feel like they have to. They often do this in order to maintain a sense of harmony in their environment and to make others feel at ease.

ISTPs aren’t often fans of having to mimic others, but they can do this if they have to. They are charming people who can often figure out how to behave in order to blend in. ISTPs know how to adapt to their surroundings, even if they simply do this in order to obtain a little peace and quiet. ISTPs don’t often feel the need to mimic, but there are times when it is necessary. Most of the time though they prefer to be themselves instead of having to adapt to the behavior of others.

ESTPs can definitely mimic the behavior of others, especially if they feel like they need to do this. In most situations ESTPs would rather be themselves and dislike having to pretend to behave a certain way in order to please people. While they don’t often like this, ESTPs can mimic people in order to adapt and get the response that they are hoping for. They simply enjoy being able to be well-received by those around them, especially the people they really like.

ISFPs really don’t like mimicking others, instead they feel happier being themselves. They do sometimes keep parts of themselves private and only share it with the people they trust, but that isn’t quite the same as mimicking. ISFPs believe in being sincere with others, and don’t like having to act a certain way in order to get what they want. ISFPs are friendly and kind people, who are happiest just behaving the way that feels naturally for them.

ESFPs really aren’t interested in mimicking others, instead they would much rather be themselves openly. ESFPs are sincere people who just want to be comfortable being who they are without feeling the need to change for the sake of others. They really don’t see a reason to pretend or mimic others, for ESFPs this doesn’t often cross their minds. They would rather be their charismatic and friendly selves, and enjoy being able to connect with others openly.