Here’s How You Handle Marriage, Based on Your Personality Type 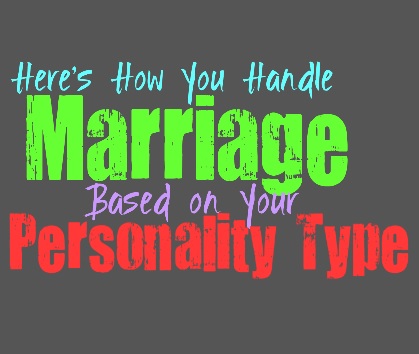 Here’s How You Handle Marriage, Based on Your Personality Type

While the desire to get married isn’t always tied to type, the way you behave as a spouse can somewhat be connected. Here is how you likely handle marriage, based on your personality type.

INFJs might not be the most traditional minded people, so sometimes the idea of marriage can seem unnecessary. At the same time they believe in love and by standing by the person you are committed to. For the INFJ who does believe in marriage, they take this step very seriously. They want to make sure they are making the right choice and are taking this journey with the right person. INFJs believe that when they are married to someone this is intended to be a lifelong thing, and it means the world to them.

ENFJs often believe in marriage and believe in taking this next step with someone they adore. They want to find the right person to spend the rest of their lives with, and don’t want to jump into this without thinking it through. Deep down the ENFJ is a romantic, who simply wants to find love that will last. For them marriage means they have found someone they want to share their life with, and sometimes they step into this with their heart instead of their head,

INFPs aren’t always traditional people, but they are romantics. They want to find the right person who they can share their souls and their lives with. When the INFP does commit to marriage, this means they want it to last forever. On one hand the INFP takes this commitment seriously, on the other hand they can sometimes jump into things with their heart and completely neglect their head. When they are in love the INFP gets swept up in this feeling, and can be very passionate about the relationship.

ENFPs might not be traditional people, but they do believe in love. They are romantics who might act like marriage is the last thing they want, yet deep down they crave finding someone they can commit to in this way. If the ENFP does take that step it is often a choice made from the heart, and not always with much of their head involved. They simply get swept up in their emotions, and for the ENFP all marriage means is that they want to spend their life with this person.

INTJs who believe in marriage definitely take this commitment very seriously. They aren’t the type to just jump into marriage without thinking it through and weighing their decision thoroughly. When they take this next step with someone they want to be sure that it makes logical sense, but they include their feelings in this choice as well. INTJs want to consider all of the angles so that they know they are committing to someone they can really make this promise to.

ENTJs believe in lifelong loyalty, and because of this they take the step of marriage very seriously. They want to make this commitment without being sure that they can really uphold the promises being made. While some people just believe that love is enough, ENTJs want to consider all of the logical aspects as well. When they take this step it is because they know that they can make things worse and that they can truly live up to the promise they are making.

INTPs might have a hard time believing in the idea of marriage, but deep down they are romantics. They aren’t obvious about these inner feelings though and can have a hard time really expressing it. When the INTP makes this commitment they don’t expect to back out of it. They want to make the relationship work no matter what, and will logically assess the situation. While INTPs can be logical about their choices, they also can be emotional about them when it comes to love. They simply want to have someone by their side who understands them and appreciates who they are.

For ENTPs marriage does often feel like a big step, but they sometimes rush into things without using their logical side. ENTPs are spontaneous people who want to follow their passions down whatever road it might lead them. When they fall in love with someone their inner romantic can take control, causing them to get married without fully considering the promise they are making. ENTPs do long for a deep relationship where they can spend their lives connecting with someone and enjoy challenging each other into their old age.

For ISTJs marriage is a serious commitment and is not something they take lightly. When they take this next step they expect to be spending the rest of their lives with that person. ISTJs will consider the choice they are making and want to be sure that they can truly make things last. They are loyal people who believe in upholding their promises no matter what, so for the ISTJ marriage is something they value and take seriously.

ESTJs take marriage very seriously, but they also believe in it and the promise they are making. When the ESTJ finds someone they love and are happy with, they will consider the commitment and if they can truly make things work forever. When the ESTJ gets married they don’t expect to ever get divorced, instead they take the commitment very seriously and plan to make things work no matter what it takes.

For ISFJs marriage is an important meaningful part of life, and something they take seriously. ISFJs often value married life, and believe that committing to someone this way is a wonderful thing. For them being in love and finding someone to share their lives with is truly valuable and important to them. They don’t want to back out of this commitment though, so the ISFJ definitely wants to be sure to choose wisely as far as marriage goes.

ESFJs who believe in marriage often takes this commitment very seriously. For them there is nothing more wonderful than finding someone they can promise to stand by no matter what. Having a person they love and can share their lives with is a truly meaningful and beautiful thing. ESFJs often feel like marriage is something they want in life, especially when they find the right person to make this sincere promise to.

ISTPs can be spontaneous people, but at the same time the idea of marriage can be a bit frightening for them. They would much rather wait until they are older before taking this next step. ISTPs don’t like rushing into such a serious commitment, and might have a hard time taking that step at all. They don’t want to feel trapped in a relationship, and because of this marriage can often feel like more than they can handle until they are much older and ready for it.

ESTPs might struggle with the idea of marriage when they are younger, but the ones who decide to make this commitment often do this with their heart. They can be closet romantics, loving the idea of sharing their life with someone special. While ESTPs might play the field for a while, when they do settle down they want it to be something truly meaningful and lasting.

ISFPs follow their hearts, which can sometimes cause them to rush into things. They make the decision to get married based on how they feel about the person, and might avoid the more logical side of the situation. For ISFPs marriage is simply an expression of their love and commitment, but this isn’t always something that includes the more responsible side of things. The ISFP might not consider if they are right for that person in a practical sense, and will more much more romantic about their decision.

For ESFPs marriage is often important, but they might not be ready for it in their younger years. The ESFP might feel pressured into getting married if that is what their friends are doing. They often need time to enjoy their independence before they make such a serious commitment. While ESFPs do want to find someone to share their lives with, rushing into marriage can lead to a few broken promises. They do best when they are patient and wait for the right person who truly completes them.