Here’s How You Feel About Frenemies, Based on Your Personality Type 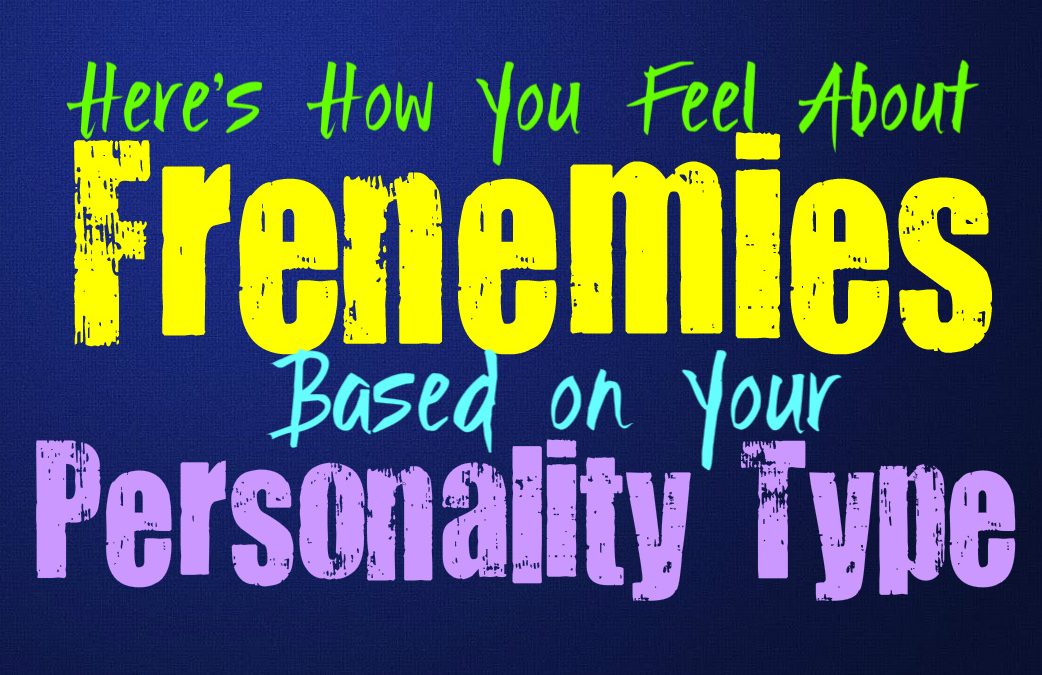 Here’s How You Feel About Frenemies, Based on Your Personality Type

Frenemies are those people who act like friends but in truth they are always in competition. It is more of a situation where you are keeping your friends close and your enemies closer. To some this seems like a natural way to behave, to others this feels exhausting and pointless. Here is how you feel about having frenemies, based on your personality type.

INFJs are definitely not fans of keeping frenemies, and prefer sincere connections. They might not like acting rude towards the people they distrust, they would actually rather just keep them at a distance. INFJs only want people in their lives who they can trust and who they deeply care for. Having frenemies would actually be extremely draining for the INFJ, and would leave them exhausted after every encounter with that individual.

ENFJs do prefer to keep people in their lives who they can trust and care for, but they have a hard time pushing people away. If they are in a social group with people who they dislike, this might turn into a frenemy situation. They have a hard time causing outright drama, so the ENFJ might remain friendly with someone who they do not like or trust very much. This will likely be very draining for them though, since they prefer to be around the people they love and trust.

INFPs don’t like having frenemies at all, but they also dislike causing drama. They might end up in these situations where they have “friends” in their social group who they dislike and do not trust. Eventually the INFP will have a hard time keeping their feelings bottled up, and they will likely need to disconnect from this person. They simply prefer to have people in their lives who they can trust and rely on, instead of having these fake friendships.

ENFPs don’t’ like having fake friends, and prefer to make connections that are meaningful and lasting. When they get into social settings sometimes they want to avoid drama, and so they will have to act friendly towards someone they don’t trust or like. When this happens the ENFP might try to avoid the drama for a while, but eventually they will feel far too exhausted from the situation. They need to have people in their lives who they can trust and truly rely on when things get tough.

INTJs don’t like having frenemies at all, and prefer to completely get rid of their enemies. They don’t like pretending or being fake simply to avoid drama, instead the INTJ would rather be upfront about their thoughts. If they do not want someone in their lives because they don’t trust them, then the INTJ is not like to develop a frenemy like relationship. The only time they might have to do this is in a work setting, but this can often be from a competitive standpoint.

ENTJs don’t like being insincere, but there are times when they feel that a frenemy situation is necessary. In a work setting the ENTJ might want to keep their enemies close by, so that they can keep tabs on them and their behaviors. In their personal lives ENTJs often prefer to keep people they can trust though, only look for loyal connections. They don’t want to have people in their close lives who they cannot rely on when things get tough, for the ENTJ that is the worst thing.

INTPs don’t like having people in their lives who they cannot trust, but at the same time they would rather not let others know that they dislike them. When the INTP is in a social setting they sometimes end up hanging around people they dislike or do not trust, and in these situations the INTP will attempt to make the best of it. They become drained by this after a while though, and eventually they need to admit to how their feeling and might need to disconnect from this person or group.

ENTPs don’t like being insincere about who they like, but sometimes they will try to make the best of a situation where they are around someone they dislike. They might be in a social group where they don’t really trust one of the individuals, and will simply try to make things friendly. The ENTP struggles with this though and from times to time they mind find themselves seeking to embarrass that person or out them for their negative behavior.

ISTJs don’t like having frenemies and would much rather have sincere relationships. They only want people in their lives who they can trust and rely on completely. For the ISTJ loyalty is extremely important, they don’t like pretending to like someone who they simply do not. This often feels fake for the ISTJ and they would rather keep those people at a distance.

ESTJs aren’t the types to keep frenemies, since they are often very upfront about who they like and dislike. ESTJs might tease or be hard on their loved ones, but they do this because they care. When the ESTJ dislikes someone or does not trust them, they are often extremely honest about this. They don’t want people in their lives who they cannot rely on when times get hard.

ISFJs don’t like having people around who they do not like, but at the same time they don’t enjoy causing drama. The ISFJ might actually have frenemies if those people are connected to their loved ones somehow. They will pretend to get along with someone in order to keep the peace in their environment and make their loved ones happy.

ESFJs don’t like having people in their lives who they do not trust or like, but they don’t want to cause drama. When their loved ones are connected to people that the ESFJ dislikes, this mind create a frenemy situation. Instead of disrupting the harmony in their environment the ESFJ might pretend to get along with someone and will try not to make their disdain completely obvious.

ISTPs often dislike the idea of having frenemies, since they prefer to keep people in their lives who they can trust completely. They don’t like wasting their energy making fake connections and will become extremely drained by this. ISTPs need a lot of time on their own, and being around people they dislike will drain them twice as fast. They would rather completely remove people from their lives who they do not consider a true friend.

ESTPs aren’t fans of keeping fake friends around and often have a hard time pretending. While ESTPs are charming people, they don’t find it easy to maintain these sort of fake connections. When they dislike someone but have to spend time with them, the ESTP is likely to make constant sarcastic comments without fully intending to do this.

ISFPs are definitely not fans of keeping frenemies, since they prefer to have sincere connections in their lives. If the ISFP dislikes someone it is often pretty evident, but at the same time they don’t like starting drama. For the ISFP their dislike of a person becomes obvious simply because they will attempt to avoid them at any cost.

ESFPs can sometimes end up with frenemies in their lives, simply because they don’t want to make their disdain too obvious to others. ESFPs try to be friends with everyone and enjoy being popular with others. When the ESFP does not like someone they might find themselves pretending to be friends with them, only to make sarcastic and biting comments towards them every once in a while.