Here’s What Kind of Morning Person You Are, Based on Your Personality Type 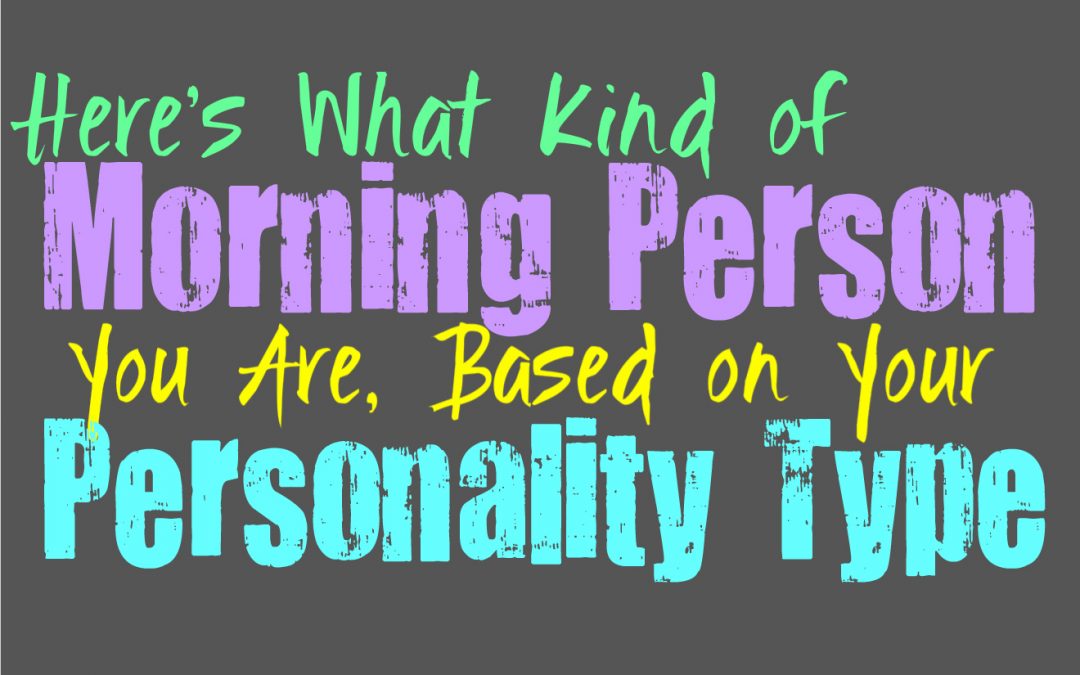 Here’s What Kind of Morning Person You Are, Based on Your Personality Type

While not everyone likes morning, most of us have to rise early regardless. Here is what kind of morning person you are most likely to be, based on your personality type.

When the INFJ is a morning person it is often because they struggle to sleep all that much at all. INFJs often have so many thoughts running through their minds that they find themselves mulling over them and keeping themselves awake. When they are up during the morning hours they are often capable of being productive and try not to allow themselves to be grumpy towards others. Although they might be pleasant morning people, they also like having their space to be inside of their own minds for a while before interacting much.

The ENFJ morning person is often this way because they have far too many things to get done to sleep in. They often have a long list of tasks and errands to run, and are always trying to take care of everyone around them. The ENFJ morning person has so many things on their minds that they rarely have the time to relax. They want to be able to make sure they live up to their expectations and take care of their loved ones needs properly.

INFPs as morning people often need plenty of time by themselves to fully adjust to the day. They don’t like being bombarded with questions and comments, instead they just want to allow themselves to soak up their surroundings in peace. INFPs might enjoy going out for a cup of coffee, just allowing themselves to be inside of their own minds for a while. They aren’t often social morning people, instead they prefer to spend this time with the peace and quiet.

ENFPs as morning people often enjoy having a few moments to themselves first, but then they delight in being active. They are likely the one to wake up early and make coffee, and might even want to wake up their loved ones. They don’t like sitting still for long and enjoy being able to find new things to occupy their time. Sleeping in too late can leave the ENFP feeling bored and stagnant for far too long.

INTJs are often morning people because they like remaining active and don’t want to waste time. They like being able to research and learn and sleeping in can really hinder their activity. INTJs also have rather active inner minds, which can make sleeping often difficult for them. They like being able to rise before everyone else in order to get a head start on life and everything they need to get done. The INTJ might not be super social early in the morning, but they are often pretty active.

The ENTJ morning person often rises early in order to get things done and start their day with maximum effort. They are efficient people who work hard to accomplish their goals, which is why they often enjoy getting up early. ENTJs are often morning people, since they active minds can make it challenging for them to really sleep in during the day. They have so many things going on inside of their heads and they don’t like standing still for too long.

The INTP morning person often rises early because they have so much on their minds already. They like to focus on absorbing new information and usually bounce around from one thing to the next. They might even decide to rise early because of plenty of research they have done suggesting that it is the best way to be productive. INTPs have such active inner minds that it is truly hard for them to stay still all that long.

ENTPs are often very mentally active people, so this is often what makes them a morning person. They like to keep busy and become bored rather easily. Often times they like waking up early so that they can focus on researching and absorbing new things. The ENTP morning person is often fun to be around, and doesn’t behave grumpily towards others. They often want to inspire everyone to get the day started and might enjoy coming up with things to do for the day.

The ISTJ morning person is often happy to wake up early in order to start their day. They are always trying to get things done and have serious goals that they want to accomplish. For the ISTJ rising early is simply an important part of making sure they get everything done the way they need to. They believe in efficiency and don’t like allowing anything to hold them back, even sleep.

The ISFJ morning person often likes getting up before everyone else so that they can take care of important chores. They want to prepare for the day and help their loved ones get started as well. They care about the people in their lives and are often focused on making sure they are happy. The fact that they are always caring for others means that the ISFJ has a lot of errands and things they need to take care of. Because of this they don’t like sleeping in and often feel stressed if they do.

The ESFJ morning person is often up before everyone else and works on getting things done for them. They want to be sure to take care of the needs of the people they love, so the ESFJ can often be rather busy. They don’t like letting things fall behind which sometimes means rising early and getting things started before anyone else is even awake. The ESFJ morning person might like to have space to themselves at first, so they can focus on what needs to be done.

The ISTP morning person often wants plenty of time to themselves when they first wake up. They might even enjoy getting up early for this very reason, so that they can be alone with their thoughts for a while. ISTPs don’t like being smothered by others and need plenty of independence in order to feel like themselves. The ISTP morning person is often quiet, and might even seem a bit distant when first waking up.

The ESTP morning person tries to be friendly to everyone around them, but they are the types who need their coffee before getting into full conversations. They have things they need to get done but they don’t want to feel overwhelmed by this right away. They would rather be able to get up and get ready for the day without being bombarded with questions and chatter.

The ISFP morning person often enjoy having some solitude when they first wake up. They rarely want to jump right into the day, and might enjoy being outside with a cup of coffee. They often rise early because they want this time to themselves before they interact with others. The ISFP morning person enjoys being able to start their day with the opportunity to experience something new.

The ESFP morning person is often unbelievably cheery and ready to start the day. They enjoy being around their loved ones and want to make the most of the day. They aren’t the type of people who need plenty of time to themselves in the person, instead they might even want to wake others up so that they can spend time with them.