How Likely Your Personality Type is to Be an Antihero 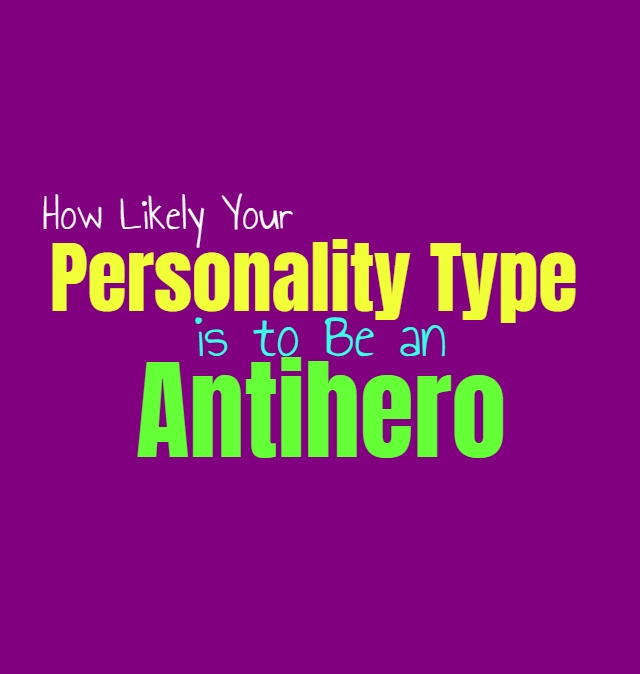 How Likely Your Personality Type is to Be an Antihero

Some personality types have the typical hero attributes, while others might not possess these qualities as readily. Not being the typical hero does not always land you in the villains or victim category, instead it could make you more connected to an antihero. The antihero is the central character in the story, but they don’t possess those typical hero-like qualities, but they do often end up doing the right thing and care enough deep down to help others. Here is how likely you are to be an antihero, based on your personality type.

INFJs do often possess complex and occasionally contradicting qualities, which makes it possible for them to fit into different categories. INFJs do often possess the perfect attributes which represent the best storybook heroes, and you’ll find many of these characters actually are INFJs. They are often courageous and caring people, willing to do the right thing even when it means going against what others do. They also think differently than most people, sometimes needing time to themselves and not always being considered similar to the rest of the world. While many INFJs can fit into the hero category, their independent spirits and occasionally cynical mindset, can also toss some of them into the antihero group. They do sometimes set themselves apart and don’t really want to fit in, and the more cynical INFJ will certainly appear like an antihero.

ENFJs can easily fit into the description of a hero, since they are self-sacrificing and empathetic people. They care about others and do what they can do always make the moral choices in life. ENFJs are often seen as the heroes, because they will do whatever it takes to make others happy and don’t solely focus on themselves and selfish goals. While they do often fit nicely into the hero category, some more cynical minded ENFJs can be the antiheroes of the story. This is often when the main character has been through great loss or pain, and so they have become harsh and detached from others but by the end of the story they still care to help others and do the right thing, even though they break a few rules along the way.

INFPs are often more likely to fit into the description of the heroes, since they have this sense of inner morals which makes them perfect for the hero of the story. Many stories actually do feature INFPs as the main hero, since they have these deep inner morals which make them stand out from others. While they might not always be the character which is the most popular person in the story, sometimes feeling different from everyone around them, they are the character the readers want to follow because of their unique beliefs and sense of morals. The INFP does what is right, and strives to serve a greater purpose, making them more of a hero than an antihero.

ENFPs are often more likely seen as the hero of the story, since they fit their descriptions well. ENFPs follow their hearts and strive to do what is right, almost always hoping to make a difference for the world around them. This larger than life and unique thought process, causes the ENFP to make the perfect heroes in most stories. They also are charming and caring people, who want to follow their strong inner morals. While they do often fit the description of the hero, there are some situations where ENFPs can make good anti-heroes as well. ENFPs don’t always follow the rules, and so sometimes they go against what they are told and want to follow their own path which might lead to trouble sometimes.

INTJs are definitely people who can be viewed as the antihero of the story, since they don’t always fit into the typical hero attributes. INTJs do focus on logic and on doing what is smart, which doesn’t always mean tending to the emotional needs of others. Most typical heroes are sympathetic and emotionally understanding people, which isn’t something the INTJ fits into most of the time. This does not mean they don’t care or strive to do what is right, they just don’t always fit into what others expect a hero to be. Many people assume this makes INTJs the typical villain, but that is not always the case. Sometimes this simply puts them into the category of antihero, someone who can still be the “good” one but not always the way people expect.

ENTJs are often seen as strong-willed and determined people, which can set them into different categories than the typical hero. They might be viewed as the villain in some storylines because of their aggressive personalities, but that is not always the case. ENTJs can also be viewed as the antihero in some cases, someone who doesn’t fit the tender and compassionate hero but who still strives to help others and do what is right in the end. They might seem more focused on themselves, but this is often an outward image in the story and in the end the ENTJ antihero is caring and loyal.

INTPs do sometimes fit into the antihero category, since they aren’t typical rule-following heroes. INTPs sometimes like to go against what is expected of them and can be seen as loners. This occasional lone-wolf style does cause the INTP to appear more like an antihero rather than the typical descriptions of the hero. They don’t have that same compassionate personality which focuses on emotions, instead they are more logical and direct. While they do sometimes strive to make a difference and do what is right, they just don’t follow the rules that most people do.

ENTPs are very often the antihero in stories, since they don’t like to follow rules or fit into what others expect from them. The typical hero cares deeply how others view them and wants to be able to live up to the expectations of those around them and this isn’t necessarily something the ENTP strives to do. The fact that they go against what people expect and often enjoy breaking the rules to do things their own way, is what makes the ENTP an ideal antihero. They do often care about others and want to help them in the end, they just don’t fit the expectations of a typical hero.

ISTJs are often more likely to fit into the description of a typical hero, wanting to follow the rules and do what is right. ISTJs actually do make great heroes in stories, since they want to do what is right and make a difference for those around them. They care about fitting in and care about doing whatever it takes to get things done. The ISTJ wants to help their loved ones and will often be brave in order to take care of those around them.

ESTJs are often more likely to fit the description of a hero, since they don’t like to break rules and go against what is expected of them. When people place expectations onto the ESTJ they often do whatever it takes to make a difference and get things done the right way. Their hardworking and driven mentality is something which doesn’t really lend to making the ESTJ the antihero of the story.

ISFJs are often more likely to be the hero, or the loved one of the hero in a story. They don’t really fit into the description of the antihero, since they are naturally compassionate and selfless people. They don’t like breaking the rules or disappointing others, and so when people expect something from the ISFJ they go out of their way to make this happen. This really doesn’t fit the lone-wolf style of the antihero, making ISFJs less likely to be such a character.

ESFJs are compassionate and often giving people, and this makes them more likely to fit the typical hero description. In most stories the ESFJ makes a great hero, or even a loved one to the hero of the story. They aren’t likely to play the role of antihero, since they don’t find it easy to go against what others want and expect of them. ESFJs aren’t naturally rule-breakers, instead they work hard to ensure that everyone around them is cared for and work to create harmony.

ISTPs are definitely more likely to be the antihero in the story, since they are independent and mysterious people. They often prefer to avoid others and keep to themselves, wanting to follow their own path in life. ISTPs don’t like following the rules, and so when they are the main characters in a story, they are often fitting the antihero theme much more than the typical rule abiding hero.

ESTPs are definitely seen as the antihero in a lot of stories, since they don’t really like fitting into the typical description of a hero. ESTPs don’t really want to follow the rules and instead decide to follow their own path. They can be spontaneous and enjoy bouncing around to different experiences, sometimes this even gets them into trouble. ESTPs are sometimes mysterious and challenging people, fitting into the chaotic ways of the antihero far more than the moral and driven hero.

ISFPs are sometimes the antihero of the story, but they often fit more into the description of a typical hero. This is because they have strong inner morals which they believe in following no matter what. While they might be a little more flighty or spontaneous than most heroes, they are still very moral people. They believe in following their hearts and always strive to do what is right and good, which is something that fits the hero very well.

ESFPs can sometimes be the antihero in the story, but they also fit into the description of the hero. ESFPs are brave and caring people, who often strive to follow their hearts and do what is right. They are the hero who is willing to risk their own well-being for the sake of going after their dreams and doing what is right for those around the. They seek out adventure, and will go against the villains without second-guessing themselves.