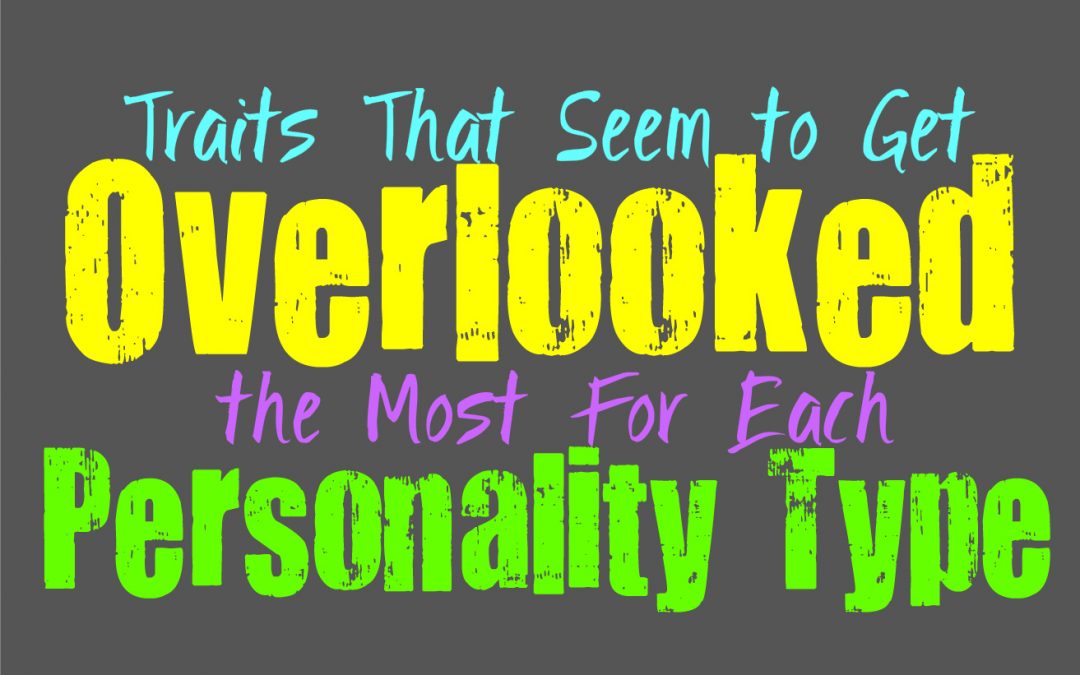 Each personality type has certain qualities that people can see easily, but there are often traits that get overlooked. This isn’t just about stereotypes, it is more about the qualities that are easy to recognize, while there are some that are present but not so easily seen by others. So here are the traits that get overlooked for each personality type.

INFJs have many traits which get completely overlooked, mostly because they have so many layers to their personalities. They are often seen as people who are focused on emotions and taking care of others, but there is so much more to them than just this. INFJs do what they can to take care of others, but they also have truly rich minds with a proclivity towards information and intriguing ideas. INFJs actually like enriching their minds and exploring things that are more logical than emotional. Since INFJs can be so closed off and keep to themselves, they also have wonderful senses of humor which people might completely overlook or miss out on.

ENFJs are compassionate people and their desire to help others is often what people recognize most about them. This causes many other traits and wonderful qualities to become completely overlooked. ENFJs are also extremely passionate people with a strong sense of intuition. Their passions are focused on more than just their loved ones, but those things might not be recognized by most people who don’t take time to get to know them. ENFJs have strong-wills and powerful desires, they are highly capable of understanding complex ideas and actually enjoy getting into debates about these things.

INFPs are often seen as emotional people, who only do things based on their feelings. While they do base most of their decisions on their inner emotions and their strong sense of morals, there is much more to them than just this. INFPs are also thoughtful people, who enjoy developing their minds and learning about new subjects. They often spend a lot of their time researching and reading about different ideas and they might even enjoy things like documentaries. INFPs are much more than just their feelings and emotions, these things simply become overlooked by people who don’t take time to dig a little bit deeper.

ENFPs are passionate and deeply feeling people, but that is not all there is to them. Most people recognize their eagerness and desire to experience new things, and sometimes see this as being a bit flighty or even emotional. In truth ENFPs are often rather capable and intelligent people, who are actually drawn to learning and understanding things that others might miss. ENFPs are observant people who often see more than people realize, since they sometimes keep these observations to themselves. ENFPs are more than just their emotional side, and in truth can keep a lot of their feelings inside.

INTJs are intellectuals, with a strong passion for learning and understanding as much as they can. While it is true that INTJs are focused on knowledge as well as accomplishing their goals, there is much more to them than just this. They often have an inner sense of creativity and even a passion for more artistic things, which can sometimes be missed. INTJs are also deeply loyal people and will stand by the ones they love with a sense of commitment and caring. They often want to help others more than people realize, and this is something that becomes overlooked because they can be somewhat harsh with their delivery.

ENTJs are often seen as logical and aggressive people, who do whatever it takes to get things done. Their sense of efficiency is often obvious to others, but there are traits that often go overlooked by those who do not know them on a deeper level. Not only are ENTJs passionate people, they are also deeply caring of their loved ones. Once they let someone into their lives they will do just about anything to take care of them, and their sense of loyalty is unwavering. ENTJs are loyal people but they also have a more creative side and might even be somewhat artistic people.

INTPs are often seen as cold and logical people, but there is definitely more to them than this. While INTPs are very focused on information and exploring their inner minds, they also have rather sensitive and caring hearts. They might struggle to understand their own emotions and the emotions of others, but that doesn’t mean don’t feel things just as deeply. INTPs are actually rather sensitive people this just isn’t something that can be seen on the surface. They often care about their loved ones and think of their well-being more than anyone would be capable of noticing. INTPs feel things very deeply, this just isn’t a quality that people can see on the surface.

ENTPs are often seen as passionate people who can be a bit larger than life at times. Their outgoing side shines through and they spend time debating and interacting with others. There are many traits that people easily recognize from the ENTP, things such as their hunger for knowledge, their imagination and their curiosity. What people often miss is their inner romantic hearts and their desire to feel something truly meaningful and deep. ENTPs often want to make a difference in the world more than people realize, and this comes from a place of wanting to be someone worthwhile.

ISTJs are seen as hardworking and driven people, and sometimes even viewed as a bit quiet. Since they are introverted and keep to themselves most of the time, there are many qualities that people overlook completely. ISTJs are actually deeply caring people, who do whatever they need to in order to provide for their loved ones. They might not be great at showing emotional support, but that doesn’t mean they care any less than someone with stronger empathy. ISTJs actually do whatever they must to provide for their family, because they care deeply for their well-being. ISTJs also have a sarcastic sense of humor which can be quite hilarious, people just don’t always get a chance to witness this.

ESTJs can be viewed as aggressive and even cold people, since they aren’t great at showing their emotions. They are focused on getting things done and being efficient, but there is much more to them than just this. Deep down ESTJs are caring people, who do everything in order to be a good provider for their family. The main reason they work so hard to become accomplished and successful, is so that they can provide for the people they love the most. ESTJs can also have romantic hearts, even if this isn’t something people can readily see in them.

ISFJs are viewed as giving people, who want to provide a comfortable lifestyle. They can be seen as homemakers, who have a more old-school mentality with most things. This can cause people to overlook the deeper qualities of the ISFJ, especially since they traits can remain hidden from most people. ISFJs simply don’t want to let others down, and sometimes this means keeping some things to themselves. ISFJs can actually have some peculiar interest and a much more curious spirit than they let on. They want to be sure to take care of their loved ones, and so some of their darker desires can become pushed aside.

ESFJs are deeply compassionate people who strive to take care of their loved ones and make them happy. Their focus on taking care of others is often the things that is more noticeable about their personalities. What people often miss is their inner minds as well as the strength of their spirit. What most people do not recognize is how much the ESFJ might be struggling inside, yet they continue to overcome and fight for the people they love. ESFJs also have a creative and passionate soul, which can often be overlooked or completely ignored by others.

ISTPs are often seen as mysterious people, and because of this much of their personality can be hidden from others. They appear rather cool and have a way of expressing themselves which leaves people feeling intrigued. ISTPs can also keep people at arm’s length, mostly because they spend a lot of time avoiding commitment. While these things are obvious about the ISTP, there is so much more to them. They actually care about helping others, and only avoid things that hold them down because they have wild and passionate hearts. They want to seek out the things that will fulfill them most, and do envision making a difference.

ESTPs are passionate people who seek out the things that fulfill them and leave them feeling ready for more. They can become a bit bored with stagnancy, and so they appear a bit more scattered and reckless to people. While their more spontaneous nature is seen by others, people often miss the depth of their compassion for others. When the ESTP cares for someone it is like they save all of their love for those special few people. They will often go above and beyond to please the ones they love and truly want to do whatever they can to make them happy.

People often recognize the emotional and creative side of the ISFP, noticing that they have a bit of a flighty personality. While ISFPs can be flighty in the way they seek out new things, there is so much more to it than just this. What people don’t often realize, is that ISFPs only bounce around because they are passionate people who are searching for the things that will fulfill them and make them want to stick around. They are emotionally driven people, but that doesn’t mean they are incapable of seeing logic and reason.

ESFPs are often seen as spontaneous and fun-loving people, and because of this people often miss the more complex qualities to their personality. ESFPs are seen as emotional people who just focus on doing things that feel good in the mood. In truth ESFPs are capable of sacrificing and giving up so much for the people they love. They often think about these people constantly and will do just about anything to make them happy. ESFPs have truly caring hearts, as complex minds which are capable of comprehending more than people realize.