Just How Good You Are at Finding Profits, Based on Your Personality Type 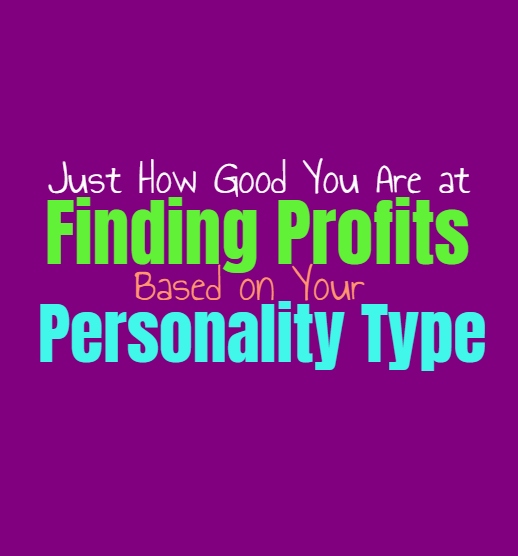 Just How Good You Are at Finding Profits, Based on Your Personality Type

Some people are naturally good at uncovering profits and the most fruitful business endeavors. This is a skill anyone can possess, but some types can be more inclined to this. They find it easy to read the risks and figure out where the most profits will occur. Here is how skilled you are at making things profitable, based on your personality type.

INFJs are not people who find themselves drawn to the idea of making money or forcing things to become profitable. This doesn’t mean the impractical people, since they are fully aware of the importance of money in society. At the same time, they often feel repulsed by the worlds obsession and love for money. INFJs can become disillusioned with shallow things, especially when people put profits above morals and being a sincere person. While their intuitive abilities and understanding of people can help them find the more profitable options, it isn’t really what they are drawn to.

ENFJs are intuitive people which does help them understand how to navigate most situations. They can often read when something will be profitable, since they care about making intelligent choices. ENFJs are certainly hardworking and care about pushing themselves forward and building a future which they can be proud of. This side of themselves often makes them want to understand profit margins and being able to make wise business choices. There is often another part of the ENFJ which can become disillusioned with this though, feeling a bit repulsed by the worlds shallow love for money.

INFPs rarely care about finding profitable ventures, instead they want to follow where the inspiration guides them. This doesn’t mean they are clueless about their needs for money, but the obsession with this money becomes sickening for them. INFPs really don’t like focusing on things which are shallow and so they certainly don’t find themselves wanting to dive into uncovering profitable business choices. Especially when this goal comes above making the moral decisions which matter to them.

ENFP
ENFPs are often capable of using logic and reason, but that doesn’t mean they put this above their sense of morals. They don’t want feel as if they are focusing only on shallow things like making money, especially when they believe there is something more important they should be focusing on. For the ENFP it is important to focus on doing the right thing and contributing to the bigger picture. While they do care about being successful, they aren’t necessarily great at focusing solely on profits.

INTJs are often good at uncovering the most profitable choices, and actually care about doing this. They often have a strong head for business, wanting to be sure they are always making the smartest choices. For the INTJ it is important to analyze the situation and follow the path which will make their futures better. They care about being sure, and especially care about understanding the profit margins and risks in any business venture. This is something which often comes naturally for the INTJ though, and isn’t something they really struggle with.

ENTJs are often naturals when it comes to uncovering the most profitable business choices. They have a mind for these types of things, and often know how to figure out the best path to take. ENTJs are logical people who will work hard to uncover the right information and the most efficient choices. They use both logic and intuition to help them make their decisions, and are because of this they can certainly uncover the most profitable path.

INTPs are often very analytical people, which helps them look into business situations and make the smartest choices. They can often figure out which things are profitable by analyze the past and using their intuition to figure out the different patterns. INTPs are great at seeing patterns and this definitely helps them uncover the most profitable business ventures or decisions which they should make. For them the difficult part is actually finding the motivation to move forward with this, since sometimes they can question their intuitive abilities.

ENTPs are very logical and analytical people, which helps them uncover useful information along the way. They can often use their intuition as well as their knowledge to help them move forward and uncover the most logical business venture. ENTPs can see where the profits are by looking at patterns and figuring where things will shift and change down the line. Their minds are naturally wired this way, and so they definitely possess this skill.

ISTJs are logical and practical people, who believe in following a plan. For them this does often mean uncovering the most profitable and sensible option. They care about making the right choices which will help them to grow and work towards the life they want. ISTJs can often use the past methods to help them uncover a profitable choice, even if it isn’t the newest or most groundbreaking venture. They are still capable of remaining in profit, and have a very well structured way of doing this.

ESTJs are often practical people and this helps them uncover the best way to make profits off their choices. They often follow proven methods and plans which they will will be efficient, ones they have witnessed before. Looking at things from a logical and structures approach, helps the ESTJ to figure out the best way to make profits and ensure that they are following a business plan which will be truly fruitful.

ISFJs might not always enjoy the idea of venturing out and making profits on their own, but that doesn’t mean they are not capable of this. They are focused and driven people, especially when it comes to ensuring the well-being of those they love. When it comes to the workplace ISFJs often focus on being good at whatever they do, so that they can have a sense of stability in their careers and in their lives. When they are supposed to figure out the most profitable actions to take, they will do their best to analyze and look at patterns.

ESFJs are actually surprisingly good at figuring out ways to be profitable, since they focus on getting things done no matter what. They are often practical and responsible people, who simply want to be able to take care of their loved ones. They will work hard to uncover the means of being efficient and of making profits. For the ESFJ it often depends on the place they are in, and what they have grown up learning and understanding.

ISTP
ISTPs are often focused on knowledge and facts, which does help them figure out ways of being profitable. For them it is about analyzing the facts, rather than using a sense of intuition. They can often do this, but the ISTPs desire to live in the present moment they do sometimes have a tendency to become distracted by things which are more exciting for them.

ESTPs live very much in the present moment and enjoy being able to explore whatever excites them. While ESTPs can often analyze the facts in a way which helps them uncover the most profitable choice, that doesn’t mean they always follow it. They follow where the excitement is and can sometimes be a little bit reckless when it comes to finances. ESTPs are complex people, on one hand they enjoy analyzing and looking at the logical choices, but on the other they often follow excitement.

ISFPs don’t usually care about obsessing over profit margins, and really don’t have a natural mind for this type of information. They become bored of these things and don’t want to obsess over making money. For the ISFPs a sense of morals and doing what they believe in is far more important than just focusing on ways to make profits. This doesn’t mean they are incapable of this, they just can be a bit more reckless.

ESFPs can sometimes be capable of analyzing information so they can figure out the best means of making profits. At the same time they don’t really enjoy doing this, since it can drain them and distract them from things they actually want to be doing. ESFPs become bored easily and really don’t want to spend their energy on practical things which wind up sapping their energy and leaving them feeling more stressed out.