Are You Good with Impulse Control, Based on Your Personality Type 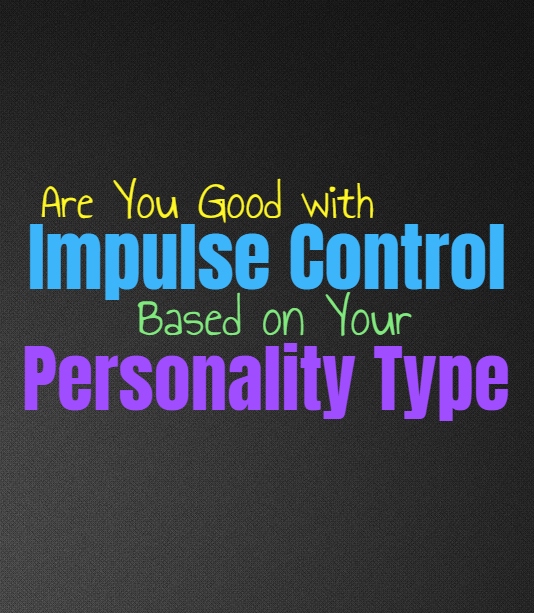 Are You Good with Impulse Control, Based on Your Personality Type

For some people controlling their impulses can be difficult, and they find themselves just going after the things they want without really thinking it through. For others having control over these impulses is truly important and often a skill which they are sure to value and maintain. Here is how good you are at impulse control, based on your personality type.

INFJs are often very capable of impulse control, sometimes to their own detriment. They don’t like jumping into choices and believe in using their intuition and being sure before taking this next step. This can sometimes cause the INFJ to feel anxious about the situation, not wanting to risk that they might not be making the smart choice. This happens more when they aren’t trusting since sense of intuition which tells them which road to travel. INFJs only have trouble with impulse control under times of extreme stress, and when they have been forced into their shadow.

ENFJs are often good when it comes to impulse control, especially when they are in their normal routines. They don’t like just jumping into something without thinking it through, and believe in using their sense of intuition to guide them. For the ENFJ just jumping into something without being sure it will work out, is both illogical and irresponsible. They care about doing the right thing and making the smart choices and so impulse control is important to them. They do have have times when they are under extreme stress, and their impulse control is what becomes affected in these situations.

INFPs are often somewhere in the middle when it comes to impulse control. They aren’t incapable of controlling their impulses, but they have certain times when they simply don’t want to. INFPs follow their emotions and their inner sense of morals, which can sometimes lead them into situations a bit more impulsively. They don’t live every moment just jumping into risky situations, but there are times when they go with what inspires them and this can seem to lack impulse control.

ENFPs aren’t necessarily great at impulse control, since they go with whatever inspires them. When they are excited about something they don’t want to have to hold themselves back just because someone else doesn’t want them to do it. They go after the things they want and sometimes this means they don’t really care to focus on controlling themselves or their impulses. ENFPs don’t just jump into anything and are capable of controlling impulses which are connected to their moral beliefs.

INTJs don’t have trouble with impulse control and are often very good at keeping themselves together. They don’t like doing anything which might risk their goals and their sense of focus. INTJs work hard to get things done and care about making the smart and thought out choices. Because of this they don’t believe in just going on impulse, especially since this is often connected to emotions rather than logic. They might have moments of lacking impulse control but this is when they are under extreme stress and are not themselves.

ENTJs often have great impulse control, since they believe in making logical and smart choices. They don’t like simply bouncing around and jumping into things without thinking it through. For the ENTJ it is important to analyze the situation and make the choice which is going to get them where they want to be. For them just jumping into things by following impulse, is foolish and is often based on emotions rather than logic and reason.

INTPs are often in the middle when it comes to impulse control, since they do sometimes find themselves jumping into things. They do think about the situation and do their best to analyze the information to make the right decisions. There are simply times when the INTP wants to experience something in order to learn from it, and so they do dive in in a way that seems to lack impulse control. For them it is often more complex than people realize, and does have a lot of thought in it.

ENTP
ENTPs often appear to lack impulse control, but the risks they take are often calculated ones. They analyze the situation, and then dive into the experience without wanting to feel held back. ENTPs do sometimes bounce around from one things to the next, wanting to gain knowledge from these experiences in the best way possible. There are times when they might act on impulsive, but they have almost always analyzed the situation beforehand even if it does not seem that way.

ISTJs definitely don’t have impulse control issues, since they focus on getting things done. They don’t want to let their emotions to control them or their choices, and so they try their best to remain moving forward. For the ISTJs just allowing themselves to act on impulse is illogical and irresponsible and it really isn’t something they are okay with. They work hard to be efficient people and will do whatever it takes to remain working towards their goals.

ESTJs don’t often have impulse control issues, instead they believe in doing what they must in order to get things done. They care about being efficient and acting on impulse is likely to prevent them from doing this. For the ESTJ it is vital that they really work hard and get things done to the best of their abilities. They don’t usually struggle with impulse control, since this often seem irresponsible to them.

ISFJ
ISFJs are often great when it comes to impulse control since they don’t like doing anything which is risky or could hurt someone they love. They want to focus on getting things done and care deeply about tending to the needs of others. For them impulse control is vital and they will remain as focused as possible on making the right choices. They don’t just want to bounce around and take risks which might hurt someone they love.

ESFJs don’t like to allow their impulses to control them, especially when it risks making someone they love unhappy. They want to be in control of their own actions to ensure that they don’t make mistakes or do anything which could damage their lives or the lives of others. For the ESFJ remaining in control of their own actions and choices is truly an important and valuable thing. They rarely have impulse control issues, unless they are under extreme stress.

ISTPs don’t really care much about controlling their impulses, instead they want to give into them most of the time. They believe in going after what feels right to them, and want to live in the present moment. For the ISTP it is important to go after what inspires them, and not allow doubt to hold them back. Sometimes this means bouncing around and just following these impulses, rather than controlling them.

ESTPs definitely aren’t great at impulse control, since they often follow these impulses rather than battle against them. They go after what they want, and live very much in the present moment. For the ESTP it is important to live with a sense of excitement and to seek out things which make them happy. They don’t really control their impulses, instead they often follow them wherever they might lead.

ISFPs really aren’t great with impulse control, since they often believe in following these impulses. They follow their hearts and go after what they want without allowing doubt to control them. For the ISFP it is important to follow wherever their feelings and impulses might lead, since this is what feels right to them. It can be challenging sometimes since it gets them into trouble, but ISFPs don’t believe in being insincere.

ESFPs definitely aren’t great when it comes to impulse control, since they believe in following their impulses. They go after what they want but this often means doing things based on the present moment. They don’t really control their impulses, instead they allow these feelings to lead them and guide them in the direction which inspires them most. For the ESFP it is best to live in the moment and follow their hearts.