Why Stephen Colbert is INFP (Not ENTP): An In Depth Analysis

There has been quite a bit of discussion over the past week about Stephen Colbert’s personality type. In case you missed it, Stephen Colbert had a Myers-Brigg MBTI Certified Professional give him their personality assessment instrument on his new The Late Show on CBS. Stephen Colbert, after a few hilarious sarcastic comments, ended up showing a preference for the INFP personality. 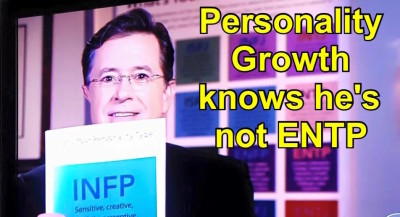 This obviously blew up the world of personality typing with mixed opinions. There were many sites that typed him as ENTP. We disagreed. In fact, we were the only site to correctly type Colbert as INFP (yes, we’re patting ourselves on the back right now 😉 ).

We have been asked to give more insight and context into why we chose INFP, so I decided to make this article.

The Colbert Report is NOT Stephen Colbert

First of all, we need to understand one thing. Stephen Colbert on his show “The Colbert Report” is a persona, and NOT his actual type. This may be particularly confusing because he is using his actual name and not a stage name.

Stephen Colbert’s Character is portrayed as a larger than life character. He is more of a stubborn, bullheaded, spinster ESTJ.

Colbert Breaks Down His Character

In this interview (starting at the 35:45 mark) Colbert himself gives a rare genuine breakdown of his character vs. who he is in real life.

“He’s a well intentioned, poorly informed, high status idiot… He is completely un-curious about the world. He is living an unexamined life.

On the set designers:

“I want your inspiration to be Di Vinci’s Last Supper. If you look at DiVinci’s Last Supper, Christ has no halo. Existance, all of creation is his halo. There’s all these converging lines and all of the room and all of creation is his halo. I want my whole set to be like a halo around me. If you look at the original set, there’s all these convergent lines above me, and we painted it on the floor. If you look, I am the rising sun.

There are no television monitors behind me, like on John (Stewart’s) set. He’s conveying the news. He’s a conduit. I am the news. I am a dawn onto my own day. But that’s the outward status of the character. But his weakness, and his incuriousness, and his thin skin quality weakens him in such wonderful ways. And I love that quality because I think that’s the reality of me. I’m not as well defined as he is, and I enjoy copping to that in my own behavior.”

Below is a quick breakdown of the Cognitive Functions of the INFP, and why it makes sense.

This interview is just one glimpse into who Colbert is. As you can see, he is a very thoughtful and well spoken individual. You can see the caring and conviction behind what he says which screams Introverted Feeling. Some have proposed that Colbert is an Extrovert, but he gives every indication that he does not particularly care for the spotlight, and lives a relatively private life outside of his show.

Some other people have said that many comedians are ENTP. But you would be surprised to find just how many are INFP. One other well know INFP comedian, Louis C.K., can appear very extroverted as well when he is on stage.

Colbert also remains strong in his catholic faith. From the Washington Post:

“Colbert has said that he attends church, observes Lent and teaches Sunday school. “I love my church, and I’m a Catholic who was raised by intellectuals, who were very devout,” he told Time Out magazine. “I was raised to believe that you could question the church and still be a Catholic.”

Colbert’s wit and humor comes from his Extraverted Intuition, which is pretty obvious and doesn’t need much discussion. He finds humorous examples and intelligent connections with ease.

Another interesting observation is that his persona is ESTJ (Extraverted Thinking dom), which is the exact reverse functions of his INFP self. It perfectly makes sense according to what he is says in the interview. The strengths of his persona are his own weaknesses, and vice versa.

Stephen Colbert’s new spot as the host of The Late Show will be an interesting deviation since he is being himself instead of a character like on the Colbert Report. Check into his new show and see if you can pick up on the differences.

What are your thoughts? Send us a message on Twitter or our Facebook Page and we’ll be sure to respond!