Are You Someone Who Enjoys Making Lists, Based on Your Personality Type 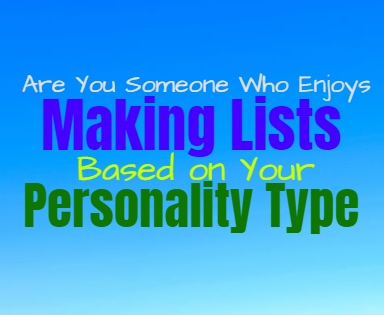 Are You Someone Who Enjoys Making Lists, Based on Your Personality Type

Some people have multiple lists going at once, for all sorts of different tasks and goals. They enjoy writing these things down because it helps them keep track and really focus on getting things checked off. For others making lists is both draining and pointless, and doesn’t really help them focus any better. Here is how you feel about making lists, based on your personality type.

INFJs do often enjoy making lists, since they can be rather organized people. They don’t like feeling as if they are falling behind and so sometimes having lists can help them keep everything together. INFJs have so much going on inside of their minds, and sometimes they need more tangible things to keep them present. For the INFJ to keep a sense of structure in their lives, lists are a great way for them to remember certain details, as well as to feel a sense of accomplishment when they cross things off the list.

INFPs are rarely interested in making lists, since this often feels a bit tedious to them. They don’t enjoy doing anything that feels like a chore, or some sort of requirement. For the INFP having to sit down at put together a list can feel a bit pointless, since they don’t suddenly feel more inclined to actually complete said list. They do have a lot going on inside of their minds, and so making lists might be helpful, but they rarely feel inclined to do this.

ENFPs rarely make lists to keep track of things, instead they are likely to take in step at a time. For the ENFP anything that feels too tedious is likely to be neglected and completely ignored. They don’t like feeling forced to do something, and making lists would just add to that responsibility they desperately want to ignore. ENFPs would rather take things at their own pace, and don’t like having to write down a list of all the things they are probably already stressed about.

INTJs are often good at keeping track of things, but they might enjoy keeping lists to help them. They are often organized people who want to be sure they get things done the right way. For the INTJ making lists is just a helpful way to keep track of all of their tasks, ideas and even responsibilities. INTJs might have to do lists, but they also have lists of different thoughts and things they want to learn more about. For the INTJ it is rewarding to keep track of things, and have something they can check off as they go along.

ENTJs are often good at keeping lists in order to remind them of important tasks. They enjoy keeping things organized and value efficiency in their lives. For the ENTJ sometimes the best way to make sure things get done the right way, is to keep track of everything in list form. If they have lists it helps them to remember what needs to be done, and to see it in a more visual way. They keep lists because they are efficient and focused people, who enjoy having ways to keep everything together.

INTPs aren’t often seen as organized people, but that doesn’t mean they don’t enjoy keeping lists. For the INTP lists are a way to process everything inside of their minds, and actually see all of their ideas in front of them. Sometimes they make lists about what they want to get done, and other times it is about the many ideas they want to explore. For the INTP making lists isn’t always about keeping things organized so they can get them done, but more about keeping tracking of their many thoughts and ideas.

ENTPs aren’t often list people, simply because they become too distracted to really continue with them. Some ENTPs might enjoy writing lists just to see all of the different ideas and different things they could explore. It isn’t really about organizing and writing out things they need to get done, but rather about seeing all of the possible directions they might be able to take. ENTPs are curious people who do enjoy diving into new things and want to be able to explore different outlets for growth.

ISTJs are hardworking people who value efficiency in their lives. Because of this desire to keep things organized, ISTJs definitely are list people. ISTJs often enjoy making lists as a means of keeping everything organized and together. They also enjoy being able to check things off as they go along, giving them a small sense of accomplishment. They don’t like making mistakes or forgetting things, and so lists are just a helpful tool to avoid this.

ESTJs are very focused on results, and because of this they don’t like making any mistakes along the way. For the ESTJ it is important to keep things organized and properly maintained in their lives. Some ESTJs do enjoy making lists as a means of keeping their tasks and responsibilities all in order. They don’t want to make any mistakes, and so forgetting something important would certainly be a big failure in their minds. In order to prevent this the ESTJ might enjoy keeping lists to keep track of everything.

ISFJs are often list making people, since they want to be sure everything is organized in their lives. They believe in creating harmony and ensuring that everyone around them is happy and cared for. In order to keep track of everything they need to get done, the ISFJ often enjoy making lists and checking things off as they finish those tasks. For the ISFJ it is also rewarding to see everything down on paper, and provides them with a small sense of accomplishment.

ESFjs definitely prefer to make lists, since this helps them maintain organization in their lives. ESFJs take care of so many things at once, and often find themselves juggling a handful of tasks. In order to really keep track of everything they often feel a sense of comfort in list making. For the ESFJ this is just a useful tool to help them ensure they can get things done to the best of their abilities. They don’t like making mistakes and can be rather hard on themselves, and so they work to be efficient in their tasks.

ISTPs are not usually list people and might become annoyed with having to keep everything written down this way. They list more in the present moment and prefer to focus on doing things their own way. For the ISTP feeling forced to keep track of things in list form, is just a constant remind of the things they probably don’t want to do. They do their best to live life on their own terms, and dislike feeling restrained.

ESTPs aren’t usually list people, since they become more focused on doing things in the moment. While they do live their lives very much in the present, there are some instances where they want to work towards building certain future goals. Some ESTPs do find themselves utilizing lists in order to help them organize everything, especially since they have a tendency to become distracted.

ISFPs are rarely list people and might find this task to be a bit tedious. They are more focused on doing things in the moment and allowing life to flow naturally. ISFPs become a bit drained with certain daily chores, and lists are just another remind of these things they don’t want to feel obligated to do. For the ISFP anything that holds them back from experiencing what they truly want, is a drain on them.

ESFPs aren’t usually list people, unless they are planning something big and exciting. When there is something the ESFP is trying to get done because they are passionate about it, they might start making lists to help them keep track. ESFPs make lists when they are excitement about something, not when they are forced to do so. They don’t make lists which pertain to boring daily tasks, instead they are more focused on party plans or things of that nature.