Here’s How Prone You Are to Peter Pan Syndrome, Based on Your Personality Type 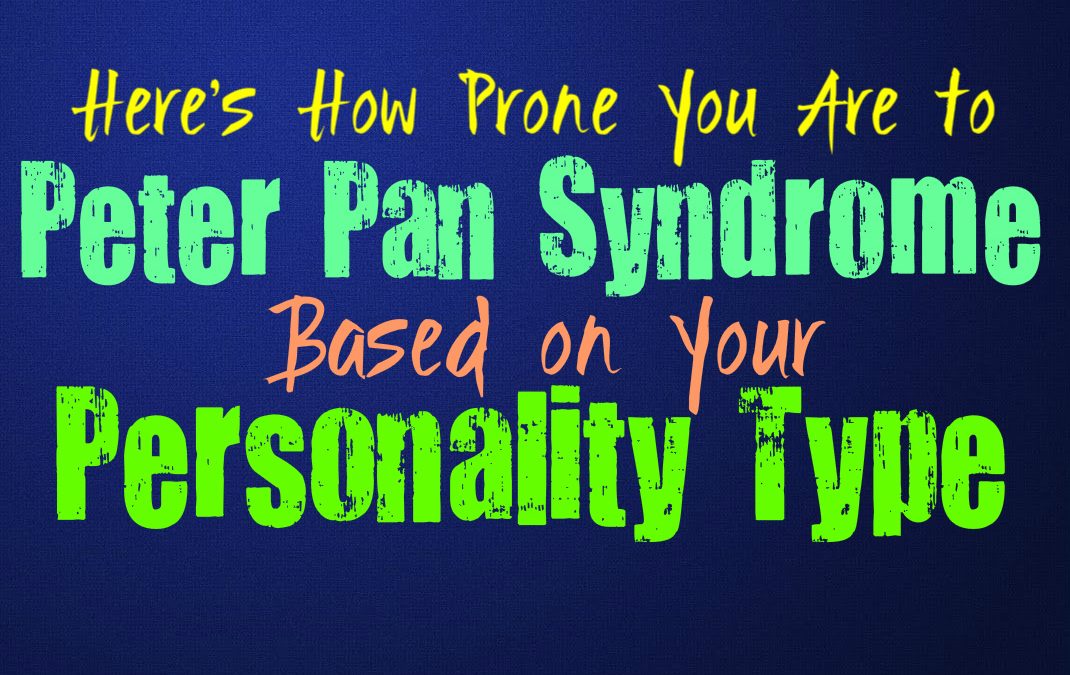 Here’s How Prone You Are to Peter Pan Syndrome, Based on Your Personality Type

While there are more dramatic definitions of peter pan syndrome, in this case we are simply referencing someone who does not want to grow up. There are some people that struggle with aging and dealing with the responsibilities that come with adulthood. Here is how likely you are to struggle with growing up, based on your personality type.

INFJs are often no strangers to taking on responsibilities, and will often be more than capable of growing up. Many INFJs find themselves growing up far too soon, and feel the need to take on the needs of those around them. While some INFJs might be immature versions of themselves, this simply means they haven’t worked on developing their weaker functions. Most INFJs really aren’t prone to things like Peter Pan syndrome sort of speak, instead they are more likely to be the opposite. They can often be the ones who had to grow up a bit too far, taking care of everyone around them.

ENFJs definitely aren’t the types to appear to have Peter Pan syndrome, since they aren’t likely to abandon their responsibilities. ENFJs are often the ones taking on the responsibilities of those around them, wanting to take care of their loved ones. They are usually emotionally mature from a young age, and might even have to grow up rather quickly. They do whatever they can to take care of others, and are rarely afraid of the challenges that might be involved in growing up or becoming more responsible.

INFPs can sometimes have a dislike of responsibilities and having to grow up. They are dreamers by nature, and prefer being caught up in their own rich inner minds. Sometimes the INFP can become frustrated by the rules of society, and dislikes having to live up to certain expectations. This can cause them to be a bit like Peter Pan in their desire to live their lives on their own terms. They enjoy being able to experience living inside of their own vivid imaginations, and dislike being dragged out of that. Responsibilities and schedules can be exhausting for INFPs at times, making them a bit more prone to Peter Pan syndrome behaviors.

ENFPs can definitely be prone to Peter Pan syndrome behaviors, since they often dislike being controlled. They don’t often enjoy being forced to focus on responsibilities, instead they are naturally dreamers. They are imaginative people who enjoy being able to experience new things, and want to seek out excitement in their lives. ENFPs can become frustrated when they have to follow certain societal demands, and simply become bored too easily for this.

INTJs rarely experience the full depth of Peter Pan syndrome behavior, and are often very capable of growing up. They are comfortable facing responsibilities, and don’t feel a need to remain childlike. INTJs believe in being responsible for their actions and strive to grow and learn. They want to always be working on themselves in order to improve and become more aware of the world around them. Being stuck in an immature state with no responsibilities, isn’t really a choice the INTJ are interested in.

ENTJs believe in being efficient and responsible for their actions, and because of this they aren’t often the types to be drawn to Peter Pan syndrome behaviors. They prefer to focus on getting things done, and are often mature in this way from a younger age. They focus on being as efficient as possible, and don’t like being held back. Even a young ENTJ often becomes frustrated with not being treated like an adult, and prefers to have a certain level of independence.

INTPs do have a desire to learn and grow, but there are parts of them that can be interested in removing certain responsibilities from their lives. In some ways the INTP is mature even as a child, and in others they are prone to Peter-Pan-like behaviors. They are often so caught up in their own inner worlds, and have a strong sense of creativity. They are can be a bit childlike in some ways, and enjoy being able to make their own choices without constant responsibilities.

ENTPs can be prone to Pete Pan syndrome behaviors, simply because they are so interested in being free from rules and regulations. ENTPs hate having to follow the orders of others, and prefer to make their own decisions. They often become annoyed with constant responsibilities and don’t enjoy having to follow strict schedules. For the ENTP being a bit childlike is simply a part of who they are, and is what makes them both creative and exciting.

ISTJs are rarely prone to Peter Pan syndrome, since they often prefer to be responsible. They aren’t afraid of stepping up in order to get things done, even from a young age. ISTJs are often mature people in many ways, and believe in fighting to get things taken care of efficiently. They are hardworking people who don’t believe in backing down from their responsibilities, especially when it is important.

ESTJs are rarely prone to Peter Pan syndrome, since they are efficient and driven people. They aren’t afraid of being responsible for their actions, instead they would rather take responsibility than step away from it. ESTJs might have some childlike behaviors, but not where it is truly important. They are more focused on moving forward and want to build a future they can be proud of.

ISFJs aren’t the types to be prone to Peter Pan syndrome behaviors, instead they would rather focus on their futures. From a young age ISFJs often take responsibility for their actions, and even want to take care of their loved ones. They dislike people who can’t seem to handle the important things that need to be done, and work hard to ensure that they step up where it matters. ISFJs are often responsible people even from a very young age, since they strive to create peace in their environments.

ESFJs aren’t prone to Peter Pan syndrome, especially since they are focused on taking care of their loved ones. ESFJs are rarely interested in maintaining their childlike innocence, and often find themselves growing up quickly. They might even find themselves trying to take care of others from a young age, wanting to make sure everyone around them is happy. They want to protect their loved ones, and will step up when it truly matters.

ISTPs are not always focused on their responsibilities, so in some ways they can be prone to Peter Pan syndrome behaviors. While they aren’t necessarily seen as immature people, they do dislike being forced to focus on things that others deem valuable. They enjoy living in the present and often like being able to do whatever they please without pressure from the people around them.

ESTPs definitely can be prone to Peter Pan syndrome behaviors, since they dislike being forced into responsibilities. ESTPs enjoy living in the moment and aren’t always interested in the future. They believe in experiencing the present, and often like being able to be a little reckless at times. ESTPs would definitely be happy to avoid growing up in many ways, especially where responsibilities and chores are concerned.

ISFPs enjoy being able to live in the present and can sometimes maintain a childlike enthusiasm. They don’t like having to focus on certain responsibilities and often become drained by this idea. For the ISFP being able to experience the present without having to obsess over the future is an excellent feeling. They would likely enjoy the idea of not having to live up to the expectations of others, and would definitely like everything attached to not having to grow up.

ESFPs can sometimes be prone to Peter-Pan-like behaviors, since they enjoy living in the moment. They want to experience life to the fullest and often hate having to deal with chores and responsibilities. Having to deal with rules and regulations, can become a bit exhausting for the ESFP after a while. They would definitely be happy with the idea of not having to grow up and deal with adult responsibilities.