Here’s Everything You Need to Know About the INFP Father 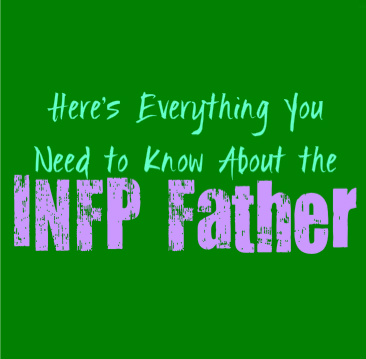 Here’s Everything You Need to Know About the INFP Father

The INFP father is definitely a unique parent, with a desire to do right by their children. They believe in being there for their children, and often do things in unexpected ways. Here is everything that you need to know about the INFP father.

They Believe In Their Children

The INFP father isn’t the typical authoritarian parent, instead they believe in and want to inspire their children. INFPs as parents often become their child’s biggest fan, rooting for them even when they are at their lowest point. They often believe that the ones they love are capable of achieving greatness, and they will definitely strive to inspire them to follow their own paths. They don’t want to hover over their children, instead they want to support them no matter what. They aren’t the type of father to judge their child simply for making mistakes, instead they want to teach them how to learn from them.

The INFP father wants to teach their children a sense of morals, and show them how to be the best versions of themselves they can be. They believe it is important for them to learn more about themselves, in order to become strong in their beliefs. They are often the ones who believe in their loved ones the most, even when they are making errors in judgement. The INFP father isn’t harsh, instead they are warm and understanding.

The INFP father is also extremely creative, and this often helps them understand their children in a different way. They use their creativity to make life fun and exciting for their children, instead of constantly scheduled and strict.

The INFP father does not expect their children to simply obey their every whim, instead they expect them to listen and respect their parents because it is the moral and right way to be. They help their children grow and understand themselves, while trying to guide them along their way. They can often see the best path for them, but they don’t want to force them down this road. The INFP father can be stern when they have to be, but they would much rather teach their children the important lessons in a much more open and compassionate manner.

While they might still care for their children, it is difficult for them to understand how to separate their own emotions from the needs of their children. They can often put their own feelings first instead of trying to understand the needs of their kids. This is definitely a challenge for the children of the toxic INFP father, making it hard for them to really maintain the independence they need. They will often have to cater to their INFP father, and feel crushed under the weight of their morals and beliefs.

The single INFP father definitely has his own struggles to overcome as a single parent. They often struggle with the organizational ends of taking care of a family, and will certainly work hard to overcome that where they can. The single INFP father wants to help their children and make sure to take care of them as best they can. They try to teach their children everything they need to be independent and strong as they grow into adults.

The single INFP father might have a hard time maintaining certain dates and aren’t always great at juggling these things. They will still try their hardest to overcome the struggles, and might enlist the help of their family in some ways. They simply aren’t naturals when it comes to focusing on the present, so this will often be their greatest challenge as a single father. They will however, always be capable of giving their children love and attention though the challenging times.

The Struggles of the INFP Dad

The INFP father experiences his own unique set of challenges as a parent. One of the biggest things they struggle with is often the fact that they see themselves different than most other dads. INFP males are a much less common type already, which gives them less to compare themselves to. They often feel different from other fathers, and their uniqueness sets them apart. At the same time this is part of what makes them such compassionate and wonderful parents. It can be difficult for them since they will not allow themselves to change their beliefs or compromise their morals as a parent, even if others misunderstand them.