What Each Myers-Briggs Type Does On a Road Trip

What Each Myers-Briggs Type Does On a Road Trip 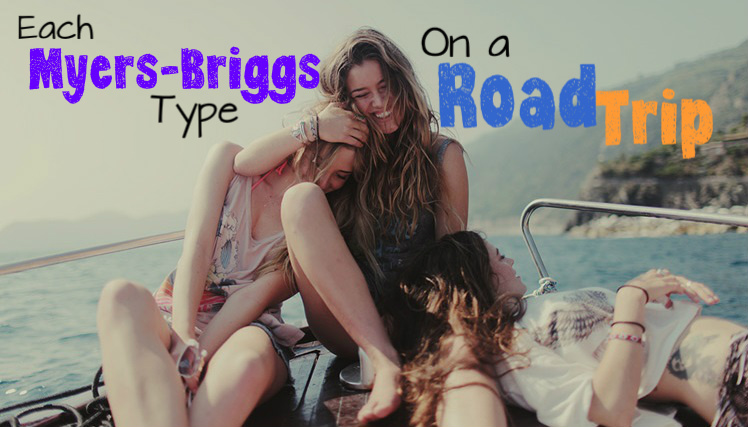 Road trips can be fun and exciting, and everyone should experience them at-least once in their lifetime. Some people believe it should be a well planned event, while others think that planning kills the excitement. Here is how we believe you would behave based on your personality type.

They are probably hesitant at first and unsure if this trip is a good idea. They eventually come around since their friends are so eager to go (probably the ENFP). They take some time to plan out the most potentially amazing road trip possible. They believe in making the most out of this opportunity, and want to have the appropriate road trip music along with the best local places to eat and sleep. They end up enjoying themselves, but end up getting tired of being cramped in a car with people for too long. They eventually just want to take some space away to read and relax.

Is slightly hesitant but once they warm up to the idea, they are extremely excited to get their friends together for a trip. They figure it is their job to plan things, and make sure everyone is eating properly and being cared for. They enjoy the chance to have fun with friends, and experience something new and bonding together.

Is slightly uncomfortable at the idea of being with others for such a long period of time. They would enjoy the trip best if it was just with their closest friend or lover. In that case it sounds like an amazing idea and a chance to experience new places. They end up getting frustrated because their hopes for the trip aren’t quite being lived up to. They make sure to bring enough proper reading material, and make the best of the trip in the end.

They are super excited about this! They are definitely on board with going on a road trip, to see exciting new places and meet new fun people. They know the vital importance of proper road trip music and destinations. Because of this they probably plan ahead with their closest INFJ friend, who helps figure out the best places to stop at. They take the time to speak to the locals and learn some of their secrets. Because let’s face it…who can say no to an ENFP?

Does extensive research and planning on the destinations, and figures out the best places to stop. They make sure that every detail is planned properly so that this trip isn’t a complete mess. They know most of their friends probably aren’t willing to take the time to just do the proper research, so they do it themselves…like usual *sigh*.

They are actually not against this trip, and find the idea kind of fun. They are excited to spend some time with their friends and do something new. They are willing to be a little laid-back on the planning, but still want to make sure things are somewhat pre-planned before the trip. They end up frustrated when no one will listen to them, and things end up being too much of a mess.

They are definitely down with this idea, as long as they don’t have to do the planning. This is definitely something they would enjoy most if it were just them and one other person. Picking up and spontaneously heading off on a road trip is actually something the INTP enjoys. They don’t enjoy strict schedules, and are willing to try something new. They aren’t afraid of things going wrong because they are very good at adapting to new situations. Besides they don’t need that much, just a few changes of clothing and their phone. Good to go!

Are excited to experience something new and spontaneous. This sounds like the perfect chance to pick up and leave everything behind. They are eager that something exciting is going to happen on this trip, and rescue them from the mundane actions of day-to-day life. They provide much needed comic relief for their friends, and are willing to adapt to anything that happens during the trip.

They definitely are opposed to this idea. It seems ridiculous and irresponsible. They need to make sure everything is planned in specific detail. They also want to make sure that the finances are in line and planned out perfectly. This wouldn’t be fair if one person is expecting to mooch off of the others. They might end up going just because their friends are forcing them. This will only happen if they get the chance to plan ahead of time, and make sure they responsibly take off of work with fair notice. People have lives, you know?!

What the hell!? Why not!? They aren’t against the idea of going on a road trip with their friends or loved ones. It seems like a good idea to have a good time, as long as they are the one doing most of the driving. Let the ESTJ lead the way, and everything will be just fine. Also, they prefer to control the radio station…classic rock it is!

Isn’t against the idea, entirely. But they probably have so many family responsibilities and things that they have to take care of at home, that they just can’t handle this. They don’t want to let their friends down so they are probably extremely torn with this decision. In the end they help plan the trip and decide to attend just to make sure nobody gets themselves hurt or in trouble.

They don’t want to disappoint their friends, so they end up going. The idea of a cramped car for days with only so many clothes to bring with them, sounds somewhat horrible. They enjoy the idea of being with those they care about, and spending time together on a fun trip. They don’t enjoy the idea of not knowing when their next shower will be. They need to make sure this trip is somewhat planned out, so that things run smoothly. And so they can shower.

They aren’t against the idea, it sounds like it could be a fun time. They don’t make definitive plans to come along, they just figure they’ll decide last minute. They would much rather decide based on their mood that day, instead of make a solid plan ahead of time.

YES! Let’s do this! They are so excited to go on this trip that they probably won’t shut up about it for days. They expect this will be a good chance to try some new fun things, and meet some attractive people. They really aren’t the ones to plan, and are mostly excited to see what happens. What can go wrong?

It entirely depends on who is going on this trip. They will be excited if it’s only them and their favorite person or people (but let’s keep it to a minimum please). They will enjoy the chance to listen to some tunes and hang out with their friends. They love the feeling of taking off and running away, even if it’s just for a little while.

Sounds like a great idea! They don’t even care where they are going, as long as they get to hang out with friends and have a good time. They expect this trip is going to be awesome, mostly because they will make the best of it. They are actually pretty fun to bring along for the trip, and make sure to get in some good karaoke time before it’s over.

What Each Personality Type Does On a Road Trip