What Makes Each Myers-Briggs Type Angry 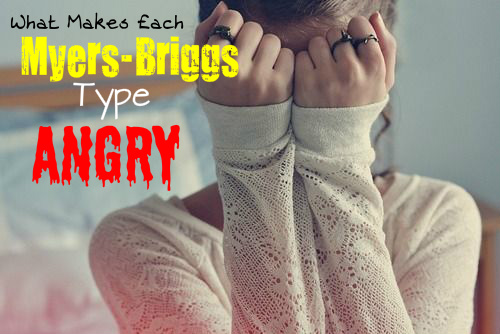 What Makes Each Myers-Briggs Type Angry

Even the most calm and well-adjusted individual is capable of becoming angry. Although everyone is bound to become angry once in a while, not everyone is angered by the same things. Here is what we think is most likely to make you angry according to your personality type.

When people are treated unfairly, this really angers and frustrates the INFJ. They dislike seeing people treated poorly, or like they are less worthy of fairness because they may be different. They believe respecting and being kind to others is just a general human courtesy that everyone should follow. They often become frustrated with society because they see so many cruelties that shake them to the core. They will feel strongly defensive of these people, and want to fight to right the wrong being done. Their anger is often a just anger (or they feel it is) and is in defense of people being stepped on.

Mostly ENFJs become angry when their specific boundaries are crossed. They are very clear about where their lines are, and it takes a lot to push them over the edge. They make sure people understand that they will take a lot of crap, but they do reach a point where it is just unacceptable. They are hard to push over the edge, but once they reach that point it isn’t pretty. They have a powerful rage, but that is only because they feel they (or most likely someone that they love) is being completely disrespected.

They don’t become outright angry easily, and tend to search for the best in people. An INFP is similar to the INFJ, in the sense that they become truly hurt at the sight of injustice. When they witness corruption or wrong doing, that they feel powerless to stop, they become very frustrated. When they see people being completely dishonest and hypocritical, they become angry and completely disappointed. They want people to respect one another, and treat each other with a certain level or dignity. That and traffic, they really just don’t like traffic.

No. Just, no! An ENFP wants to talk about something real and meaningful. They dislike meaningless conversation about things that they can’t connect with at all. They want to talk about hopes and dream, and things that are exciting and entertaining. It doesn’t have to be their own interests, as long as it is intriguing and hearty. They also have a natural distaste for nasty or mean people, they don’t get the point of being so negative.

To begin, we should probably make it clear that most of the time the INTJ looks angry because they are thinking, not because they are actually angry. If they are angry the best move is to just give them space (lots of space). They do become frustrated with people who just will not listen, and exhibit stupid behavior willfully. They know these people are capable of paying attention and taking their solid advice, but they just float around like bimbos without brains.

ENTJs strongly dislike people that they cannot rely on. When someone is untrustworthy they have little patience for it. They want people around them who are loyal to them and who they can trust completely. If people show that they do not respect them enough to be depended on, the ENTJ will no longer want those people in their circle.

INTPs value precision and want to be able to get their point across to others. They do become frustrated if it seems like people are outright misunderstanding them. They want people to trust that their perception is well thought out, and often correct. They are okay with being challenged, as long as the person backs up their points with logic and understanding. When people continuously misunderstand them because they just aren’t trying hard enough, the INTP will become frustrated.

When someone attempts to manipulate the ENTP they become very frustrated. They feel like this is an outright insult to their intelligence. They take pride in their ability to understand people, and are not easily manipulated by others. When someone is constantly attempting to manipulate them or deceive them, they become frustrated with this person. They also dislike people attempting to debate their logic with emotional ideals.

ISTJs have a strong attachment to duty and work ethic. When someone tries to discredit their actions or their hard work they become extremely frustrated. They are dependable and pride themselves on being trustworthy, so someone saying that they aren’t working hard is infuriating. And then there are typos. They really aren’t fans of typos.

When someone just cannot seem to live up to the ESTJs high standards, they become very frustrated. They have high standards for themselves and others, and pride themselves on getting things done the right way. When someone is incompetent the ESTJ has little patience for them. They expect that the person should be just as capable of getting the job done, and probably attribute their failures to laziness.

When someone is not aware of how their actions affect others, the ISFJ become upset. They are highly attune to the affect their actions have on people, and they work hard not to hurt others. When they see someone constantly hurting others with their insensitivity, they become frustrated. They also dislike when they have continuously asked someone not to do something, and that person keeps up with that bad behavior. They feel like these people are just being inconsiderate, and it bothers them greatly.

ESFJ- Hurting Their Loves Ones

ESFJs definitely try to keep the peace, but nothing angers them more than someone harming their loved ones. If you wish to evoke the wrath of the ESFJ, say something cruel about the people they hold dear. They can take a lot of negative attacks on their own character, without becoming too outright angry. They tend to be forgiving, but if you harm their loved ones you will probably face the pain of a thousand fiery deaths. They also aren’t the biggest fans of attention seekers.

ISTPs are generally pretty laid back people, and don’t anger easily. When they become angry it often comes in quick but intense flashes, then dissipates soon after. They may hold grudges but those aren’t usually stemmed from anger, but rather that they feel someone is being disrespectful to them and needs to be avoided. ISTPs do dislike when people complain constantly, since they feel this isn’t going to make things any better. They will probably tell these obnoxious people to “shut up” and then avoid their petty existence.

ESTPs become very frustrated with people who just cannot understand simple concepts. They put a lot of personal effort into understanding and learning, and become angry with people who don’t. They often will try to correct these misinformed people, since they believe everyone should have this common knowledge. If these people continue to ignore their facts and logic and decide to spread their misinformation, the ESTP will become angry.

ISFPs often do not become angry, and tend to keep an even temper in even the harshest situations. When people are hurtful towards them, they often become upset rather than outright angry. ISFPs do dislike people who lie constantly and have zero respect for the truth. People who pretend to be something they are not, makes the ISFP unbelievably frustrated.

ESFPs enjoy being the center of attention, and dislike when others ignore them. They don’t always have to be center stage but when people purposefully neglect them and do not pay attention to them, the ESFP becomes angry. They feel like this means people do not like or care for them, and they often lash out because of it.