Why You Should Adopt a Pet, Based on Your Personality Type 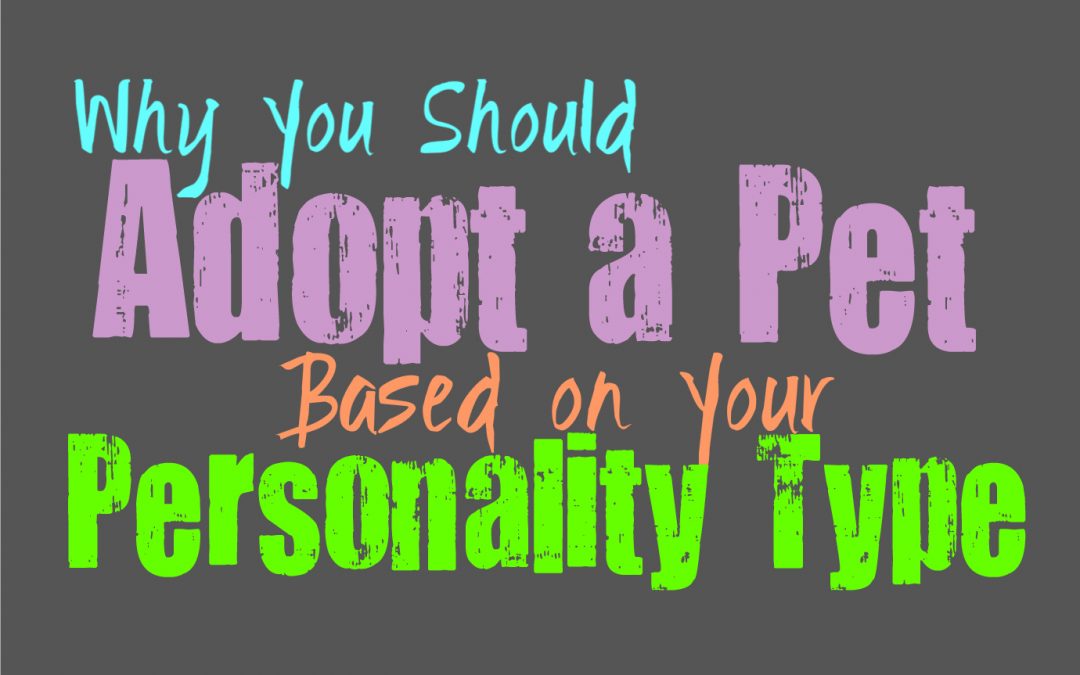 Why You Should Adopt a Pet, Based on Your Personality Type

In reality anyone who is capable of properly caring for an animal should really consider the benefits of adopting a pet. Not only do people with animals live longer, but they make for great companionship, sometimes even more rewarding than dealing with other humans. For some people it can feel like a lot of work, but for so many reasons it is worth the effort. Of course, anyone who cannot really invest the energy needed to take care of an animal shouldn’t take that next step, since it is an important responsibility to take on. Here is why you should adopt a pet (if you’re ready for it), based on your personality type.

INFJs are introverted people, but at the same time they crave companionship and affection. For the INFJ it is important to get plenty of time alone, even though sometimes they can feel a bit lonely. Having an animal is the perfect solution for those moments where they can’t quite handle human interaction, but need something to cuddle with and maybe even vent to. Having a pet there to comfort them without having to use words, is honestly ideal for the INFJ. Having a pet that they can care for and feel a sense of connection with, can be a wonderful and comforting thing for the INFJ.

ENFJs are giving and loving people, but sometimes they need time away from others. Having an animal to spend their time with so they don’t get lonely is definitely rewarding for the ENFJ. They are often natural animal lovers, and feel a sense of joy being around furry creatures. For the ENFJ having a pet can be a major stress reliever, especially since they can sometimes be high strung people. They are so focused on taking care of others and getting things done perfectly that they become drained and overwhelmed. Having a pet to relax them and bring down their stress levels, is certainly helpful for the ENFJ.

For the INFP having a pet can be a truly comforting and relaxing thing. As long as they can devote the time and energy into caring for it, their pet can bring them a true sense of warmth and comfort. INFPs need to be alone fairly often because they are introverts, but at the same time they can become a bit lonely during these times. It can be challenging for them to find people who understand their needs when it comes to a quiet closeness, and so a loving pet can actually be a great comfort for them.

ENFPs are fun people who enjoy something to keep them busy and entertained. A pet can provide this sense of joy as long as the ENFP is willing to take care of them full-time. Sometimes they become a bit distracted and so a more difficult and demanding pet isn’t usually the best choice for them. For the ENFP having a pet is often best if the responsibility is shared with someone else who keeps them on track, simply because they become distracted so easily. The best thing about owning a pet for the ENFP is having an animal to show their affection to, and feel a sense of connection with.

INTJs can sometimes be very focused people and their desire to get things done and stop them from connecting more to their emotional side. While they would prefer to pay attention to their logical minds, it is still important for them to strengthen their weaker functions in order to grow and be the people they truly want to be. A great way for the INTJ to nurture this side of their personality, is to adopt a pet that they can develop a bond with. This can often bring out a surprisingly soft side to the INTJ, much more affectionate than people would expect. It also can provide them with a sense of companionship during those times when they simply want to be away from people.

ENTJs are often very logical minded people, which is why having a fuzzy companion can be beneficial for them. It can give them a friend to relax with when they are finished a long day of work. ENTJs have a more affectionate side, it just doesn’t come out in more verbal ways. Luckily for them, animals respond to things entirely differently and recognize the love someone gives by how what they provide for them and in much less verbal ways. ENTJs can often feel that sense of understanding and will enjoy feeling more than good enough for their pet.

INTPs are often caring people, but at the same time they need so much alone time in order to feel like themselves. They can become quickly drained by social interaction, and without time to themselves they can become a bit short with people. INTPs want to be able to connect with others, but at the same time they don’t like being smothered. For them adopting a pet can be a great way to achieve some companionship during those times when they just want to be by themselves. It can also be good for them to have something to take care of, since it helps them focus a bit more on the physical world than they normally would.

ENTPs can become distracted rather easily, and so they need to be sure they can remain focused in order to tend to an animal. Having something they are responsible for might feel a bit intense at times, but it can be really beneficial for the ENTP. It gives them a sense of roots, but at the same time they aren’t overly restricted. Having an animal companion can also bring out the softer side of the ENTP, which definitely exists more prominently within them than people realize. Having an animal they connect with and care for, is really a great way to strengthen some of the ENTP weaker functions.

ISTJs are naturally good at providing for others, and so tending to an animal is often something they can handle fairly well. ISTJs enjoy a sense of companionship, but they need a lot of time alone and enjoy having some sort of silence around them. For this reason having a pet is a wonderful way for the ISTJ to have someone around without the constant chatter most people want to fill the silence with. They can spend time with their furry friend without having to hold a long conversation with them.

ESTJs are caretakers who often enjoy having something to provide for, and so having a pet can be fulfilling for them. They enjoy the companionship and often like having something they can train and teach to be even better than everyone else’s pets. ESTJs enjoy things that are traditional, and so they might be naturally included to adopt and animal since that is what most people do. For them it is fulfilling to have something that loves them and appreciate what they do, without the ESTJ having to show a sense of verbal affection all of the time.

ISFJs are affectionate and caring people, who often enjoy being able to take care of a pet. The comfort of their animals gives the ISFJ a sense of joy, without them having to constantly speak with them. They are still introverts even though they might not get the time alone that they truly need, and so a pet can be the great way to seek companionship without constant interaction. ISFJs being the caretakers that they are, often enjoy having an animal who clearly loves and appreciates everything they do for them.

ESFJs are often animal people naturally, and enjoy being able to care for something which clearly needs them. Feeling this sense of need from their pet brings the ESFJ joy, since they feel like they are making a real and noticeable difference in their lives. They enjoy the companionship they receive from their pets, and often go out of their way to spoil and love them. For the ESFJ there are many reasons to get a pet, but most of them probably already have one, or two.

ISTPs are often somewhat adventurous people who enjoy living in the present moment without restraints. Sometimes this can cause the ISTP to focus a bit too much on themselves and their own desires, and so owning a pet can actually be good for them. For the ISTP who wants to seek out growth and try to improve some of their weaker functions, owning a pet can actually be somewhat helpful. Having something else they need to care for and be committed to, can be ultimately rather rewarding for them.

ESTPs are often animal people, since they are drawn to this type of companionship. Having something they care for in this way can feel rewarding, especially since they often feel needed by their animals. ESTPs can sometimes struggle to remain focused though, so it is best if they only have one or two pets and don’t allow themselves to get out of control with this. Having something they are committed to can also be good for the ESTP, since it gives them a sense of structure and roots.

ISFPs are loving people who seek out affection and enjoy a sense of companionship. For them having a pet can be a rewarding way to feel close to another living thing, without having to constantly interact with people. ISFPs are introverts, and so while they enjoy connection they also become drained by too much mindless chatter. Having an animal around to keep them company and bring them a sense of comfort is often truly rewarding for them.

ESFPs are often seen as passionate and fun-loving people, but they have deeply caring hearts. They are often naturally animal people, and so having a pet is often more of a need for them. They are often happy to adopt animals who are truly in need of their help and affections. For the ESFP this is a rewarding experience and bring them a sense of joy that most people won’t realize or even understand.