Here’s What Your Geeky Side is Like, Based On Your Personality Type 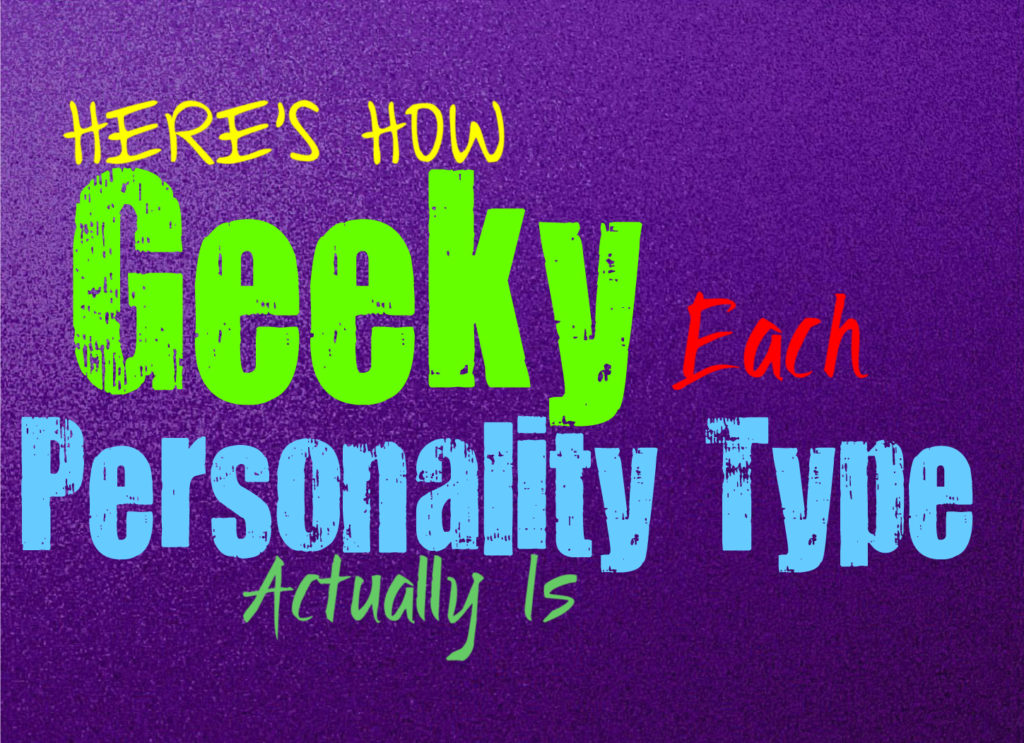 Here’s What Your Geeky Side is Like, Based On Your Personality Type

Everyone has a geeky side to their personality, even if they aren’t comfortable showing this with others. Here is how geeky each personality type is most likely to be, and how this geekiness is expressed.

INFJs definitely have a geeky side to them, and usually love absorbing new worlds and ideas. INFJs can often be great at gaming, or simply enjoy writing about different storylines that pop into their heads. They are definitely capable of trying new things and are not afraid of being seen as a little geeky. They are certainly good at hiding certain parts of themselves from others, since they don’t always feel like people deserve to know. When INFJs trust someone they will be open to showing them their unique little worlds, and will feel comfortable expressing their geeky side to them. INFJs usually love reading and absorbing new knowledge, which is a big cause for their geeky or nerdy reputation.

ENFJs definitely have a geeky side, but they have a tendency to keep this hidden from most people. They often enjoy plenty of pop culture things, and will dive into new stories and worlds. ENFJs enjoy their geeky side, but don’t always feel comfortable showing this to others. As the ENFJ gets older though, they usually become more at ease with themselves and are not afraid to be open about their geekiness. ENFJs are usually the type of people who become interested in many different things, even though they don’t always have enough time to participate in them. ENFJs are so focused on the needs of others that sometimes their own geeky passions get put aside.

INFPs definitely have a majorly geeky side, it usually is something they do not want to hide. INFPs prefer being upfront about who they are, they believe in being sincere and because of this they aren’t afraid to show their geeky side. They usually have a hide time hiding who they are, which makes their passions and interested pretty evident to others. INFPs will become completely absorbed in whatever they are excited about, whether that be a book series, television show, band or comic book. INFPs usually love reading, which can be a big part of their geeky or nerdy side. Whatever the INFP finds themselves absorbed in, will take over their soul in a way and become a part of who they are.

ENFPs have a very serious geeky side to their personality, but this isn’t always something they share with others. When the ENFP is younger they might struggle with wanting to be popular and liked by others, so they may hide their geeky side from those people. When the ENFP trusts someone though, they are often eager to show their geekiness to that person. ENFPs are all in kind of people, which causes them to obsess easily over things they are passionate about. ENFPs are often great at video games, and love diving into these activities with their loved ones. They can become truly absorbed in whatever subjects they like, whether that be comic books, video games or certain movies. ENFPs love being able to explore new things and ideas, and dislike being held back or limited. The geeky side of the ENFP is often fun and extremely knowledgeable.

INTJs love knowledge and enjoy diving into different ideas and information. Their constant need to research and learn about new things, is a big part of the INTJs geeky or nerdy side. INTJs might actually enjoy different online games, since they don’t have to interact with people unless they want to. They often enjoy anything that challenges them to improve, which usually causes the INTJ to enjoy playing video games. They definitely have a competitive streak, which is largely tied into their geekiness. Being able to understand and learn about a subject, is what the INTJ truly thrives on in life.

ENTJs love competition, and this is a largely tied to their geeky side. They enjoy being around people though, and might be nervous to express their geekiness openly. ENTJs will likely only share their geeky obsessions with their loved ones, and actually enjoy diving into these things together. ENTJs can be seen as aggressive and competitive people, but that doesn’t mean they don’t have a softer geeky side to their personality. When the ENTJ is around someone they love, they can often open up about their passions and the things they are afraid to share with other people. ENTJs can often be secret geeks, but that doesn’t mean it isn’t a large part of who they are.

INTPs are absolutely geeks for knowledge and learning, and love exploring new ideas. INTPs are not afraid to dive into something new, even if that subjects is a bit on the nerdy side. INTPs can be seen as geeks because of their intellectual strengths and their ability to absorb information so well. They often make excellent hackers, and enjoy finding different paths to explore and understand. INTPs also have a tendency to be interested in certain geeky pop culture elements, like comic books or even certain TV shows. They definitely their thirst for understanding and knowledge into their geeky side, but also have a more silly connection to geeky things such as memes.

ENTPs absolutely love diving into anything new and exciting, which is often a big reason why they are geeks. ENTPs are not afraid to be themselves, and will be completely open about their passions and interests. They truly dislike being held back by anything and will explore whatever truly sparks their interest. ENTPs will often be great at video games, and even become great hackers if they put their minds to it. They even enjoy collecting or diving into certainly geeky subjects or stories. ENTPs dislike being limited and will not be afraid to explore something that is a bit geekier than most people are comfortable with. ENTPs will often be the people who dive into something and absorb it entirely, but they might find themselves becoming bored with it and will move onto something new.

ISTJs are very pragmatic and focused individuals, who are constantly working hard to get things done. They take their work very seriously, which can cause them to appear a bit stern and intense. ISTJs prefer to get things done and work hard to live up to their own extremely high standards. When it comes to getting things done ISTJs take this seriously and will not hesitate to take charge. When it comes to their time at home though, they are actually very capable of being silly and playful people. ISTJs can appear serious on the outside, but often have rather geeky interests behind closed doors. They might enjoy reading, or watching geeky television shows with their loved ones.

ESTJs aren’t usually geeky people, and prefer to follow a more practical path. The geekiest thing about ESTJs is usually their interested in certain popular TV shows or movies. They can become completely engrossed in a television show that they love, and will often know everything about it. ESTJs are normally very pragmatic and focused individuals though, and prefer to get things done. They are constantly trying to provide for their loved ones, and often have to be the responsible ones in the household. This can sometimes cause the ESTJ the avoid things that are more geeky or possible impractical.

ISFJs often love to read, and this is usually a big part of their geeky side. They enjoy being able to spend time by themselves, just enjoying their favorite book or TV show. They aren’t always the most openly geeky people, and often prefer to keep this to themselves. ISFJs can be rather private and keep to themselves most of the time. They spend most of their time and energy attempting to care for the needs of their loved ones, which leaves little time for themselves. When the ISFJ does get a chance to be alone, they often enjoy participating in whatever personal hobby they enjoy. They aren’t always geeky people though, and sometimes the geekiest thing about them is their interest in reading or fantasy TV shows.

ESFJs are sometimes afraid to share their geeky side with others, for fear of being judged. They can often keep this part of themselves quiet, and only share it with people they completely trust. ESFJs are usually extremely geeky people, it is just not always openly seen by others. They are the closet geeks, the ones who are passionate about some of the nerdiest subjects, but simply do not feel safe exposing this to others. If the ESFJ does feel at ease with the people in their lives, they will be able to share their geekiness with them. They likely decorate their house in a chic and classy way, but their bedroom will be filled with their geeky secrets.

ISTPs are rather cool and collected folks, and are often very focused on physical activities. They are often seen as the more popular and likable people, even though they keep to themselves most of the time. ISTPs are generally interested in the physical world around them, and have an extremely adventurous side to their personality. They generally aren’t very geeky individuals though, and are usually focused on more “cool” or exciting activities. ISTPs are very interested in learning though, and can become passionate about knowledge. This is what often causes them to be seen as geeky, since they love diving into information and learning more about a subject.

ESTPs are generally not very open about their geeky side, especially since they want to be liked by others. This desire to be seen in a positive light, causes the ESTP to observe how people will react to them before expressing themselves openly. If the ESTP feels safe showing their geeky side, then they will often unload a lot of information onto those people. They usually enjoy certain stories or fantasy books or shows, but the ESTP takes this extremely seriously when they are passionate about it. They will learn all of the information and become the go-to person for whatever geeky endeavor they have become obsessed with.

ISFPs are very private people, and prefer to keep to themselves most of the time. ISFPs are not afraid to be themselves though, and will be open about their geeky interests. They definitely enjoy absorbing different and new worlds, and will often enjoy different television shows and books. ISFPs are often very focused on nature and morality, which can cause them to avoid some more geeky subjects. They are usually very likable folks, and are not afraid to be seen as geeky if that seems to fit them.

ESFPs often love pop culture, which is a big part of their geeky side. Anything that is currently popular is going to draw in the attention of the ESFP. If the most popular TV show is something geeky and focused on fantasy, then the ESFP will dive right into it. They enjoy many different fantasy subjects, and love trying new things and exploring new situations. ESFPs absolutely love adventure, and are not afraid of showing their geeky side to others. They are often comfortable with who they are, regardless of what other people think of them. ESFPs are trendsetters because they aren’t afraid of trying something and stepping outside of their comfort zones.