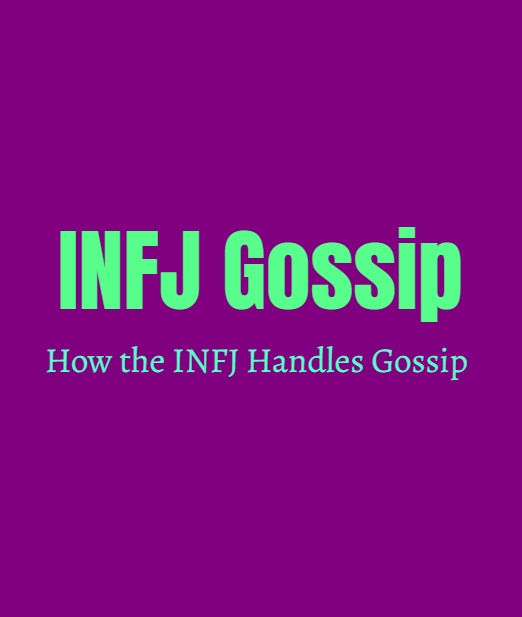 INFJs are caring people who don’t like to do anything which intends to harm those around them. While they don’t find themselves all that interested in gossip most of the time, there are situations where they might be more drawn to it than they want to be. Being someone who is so people focused can sometimes make the topic of conversation about others and this can appear gossipy at times. For the INFJ it entirely depends on the context of the situation, and why someone is being gossiped about. There are some scenarios where they might be more open to it than people realize, and others where they are disgusted by it entirely.

For the INFJ the idea of gossip is often distasteful and something which they feel morally bothered by. They aren’t okay with talking bad about people or spreading nasty rumors which are likely untrue. For the INFJ being someone who is catty and focused on spreading this gossip is truly harmful and isn’t the type of soul they want to interact with. This is why the INFJ can be seen avoiding group interactions, especially when it tends to turn into an opportunity for people to gossip. They are likely to avoid these types of people entirely and might even have moments of speaking out against them. INFJs aren’t afraid to speak their mind when they are pushed to their limit, and so if they hear someone gossiping about a loved one the INFJ won’t hesitate to respond. They are fiercely loyal to the ones they love and will defend them even if they don’t think they are right about something. They stand by the people close to them and believe in always being supportive no matter what. If anyone the INFJ loves is being gossiped about they can get very angry over this, and respond somewhat aggressively. This comes as a shock to most people, since otherwise the INFJ tends to avoid conflict and people in general.

INFJs are the people that others come to when they need to vent or just need someone who will listen. Since they are the confidant of many, this can cause them to hear gossip when they don’t necessarily want to. If that person is gossiping negatively about their own friends, the INFJ will instantly lose trust in them. To them it feels like a complete betrayal and only proves that this person will talk about them as well. They want to be around people who are much more considerate of the things they say and who tries not to be harmful to others.

At the same time INFJs do enjoy connecting with people and so they don’t necessarily mind talking about them. For the INFJ it isn’t about gossiping, it is more about sharing their thoughts and feelings about a person. This is something they only do with a person they trust and are close to, and would never chat like this to a stranger. When the INFJ trusts someone they might have times when they sit down with this person and discuss other friends or acquaintances. Especially if that person is closed off and not really open to sharing parts of themselves with the INFJ. They aren’t really used to people hiding things from them, since the INFJ has a naturally way of opening people up. When they are sincerely concerned about someone’s well-being they might find themselves wanting to dig up information about them. Sometimes this can seem gossipy, since the INFJ will try and find ways to get people to open up and talk. Their intentions are not malicious, and they might not even consider this gossiping. While to the INFJ it doesn’t appear like gossip, from an outside perspective it might seem different. Their inner intentions are simply to figure out more about this person so that they can get to know them, or possibly help them. INFJs care about people and when they are interested in someone they want to uncover what makes them who they are. Their interest in those people can sometimes be perceived as gossip, especially when they search for answers from people who have a tendency to overshare.

INFJs are sometimes contradictory people, and so it isn’t always easy to see where their lines are. When someone is being slanderous and talking badly about others, this is where the INFJ reaches their limits. They often become annoyed with groups of people who gossip about others, and will try to avoid those types entirely. While the INFJ might search for ways to understand people and sometimes this means asking questions which might lead to gossip, they don’t do this with malicious intent. For the INFJ this is often where the line is drawn, as they are sensitive to the emotions and intentions of others. They can tell when someone is gossiping purely out of malice, and they won’t stand for this type of behavior. When a person’s intentions really aren’t to be harmful but simply curious, they might be a little more forgiving about it. Being that they are good at understanding and reading people, the INFJ can often view things in ways that are difficult for people to fully comprehend.