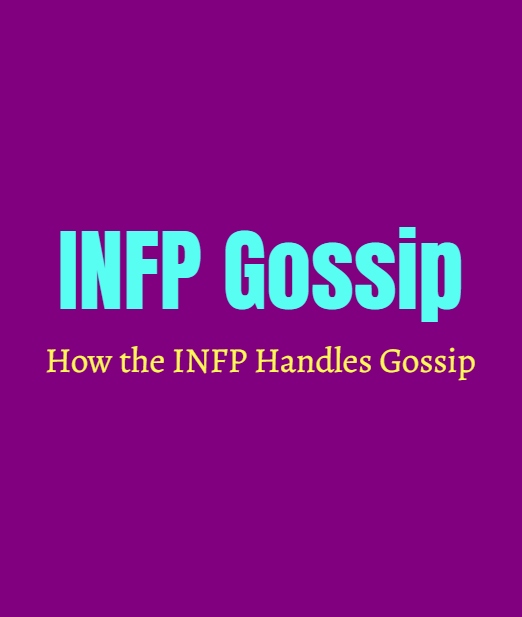 INFPs often profess to disdain gossip and people who chatter about others, but at the same time they are curious people. While INFPs don’t like saying anything hurtful about other people, there are times when they might be interested in listening to gossip when they overhear something. The truth is that being someone who listens to others problems and hears them out when they want to vent, does sometimes throw them into situations where they overhear and are knowledgeable about certain gossip.

INFPs are less likely to actually spread gossip than they are to simply listen to it. INFPs are often aware that when it comes to gossiping about a person who isn’t there to defend themselves, this can often lead to false rumors. They are well aware that people don’t always spread the truth, and so these details might not even be accurate. This causes the INFP to avoid spreading this information, even if it is about something which isn’t hurtful or mean. They don’t like being someone who gabs about others or talks about them when they clearly don’t want to be talked about. For the INFP it is important to maintain this line and not allow themselves to become part of it.

INFPs are curious people though and they do enjoy talking about people in a positive manner. While gossiping is often tied to rumors and details which aren’t always factual, it is different for the INFP when the conversation is more positive. If they are simply talking about being and explaining the things about them they like or dislike, it might not be something they feel so bad about. This is especially different when the INFP it talking with a close friend, just sharing how they feel about other people and what they think of them. INFPs don’t want to share these feelings unless they are around someone they trust entirely, since they don’t want to cause any tension or discord. The INFP would never want anything they say to get back to someone else, as this would be truly upsetting for them. They want to be able to keep the peace and they really don’t like the idea of getting themselves into trouble simply by talking about someone. This is why the INFP is only likely to “gossip” or discuss someone when they are around a trusting friend who would never break their loyalty.

At the same time it can be challenging for INFPs since they are good and supportive listeners. When they find themselves privy to gossip it is often because they have offered their ear to someone who needs to vent. This can lead to a friend sharing gossip about someone or some event, and the INFP often does not want to be rude. They also might find themselves curious to hear the details, and this can become a bit of a guilty pleasure. While they are not likely to share this information to anyone else, that doesn’t mean they don’t become interested in hearing about it. INFPs do like to be someone who is in the know about things, and dislikes being left out when something seems important. They might feel a bit guilty about even allowing themselves to hear the gossip, but ultimately if they decide not to take it all to heart then there isn’t any harm in it. While INFPs are dominant feelers, they still try to be logical about things more than people realize about them. When it comes to gossip INFPs can be very logical, often realizing that they cannot believe everything they hear. They are naturally skeptical people, which helps the INFP be more discerning with this type of information than some other types might be. They might overhear the gossip and listen, but that doesn’t mean they are likely to believe this right away. They know how easily people can spread misinformation, and so they often take it with a grain of salt.

When it comes to gossip which is cruel and seriously slanderous, the INFP can become rather upset even being around this. While they might not mind hearing people talk about others in a harmless way, when it starts to become mean they are likely to lose interest. INFPs don’t enjoy being a catty or manipulative person, and so they try their best to avoid being around these types of people as well. If the gossip they are hearing is truly spiteful and intended only to hurt someone, the INFP is likely to shut this down quickly. In most cases they are people who avoid discord and arguments, the INFP does have a side of them which can be biting when it is justified. They simply don’t like being around harmful and nasty energy, and prefer when people’s intentions are kinder. They don’t see all gossip as coming from a bad place, and so for them it is about the person and what they are actually discussing.