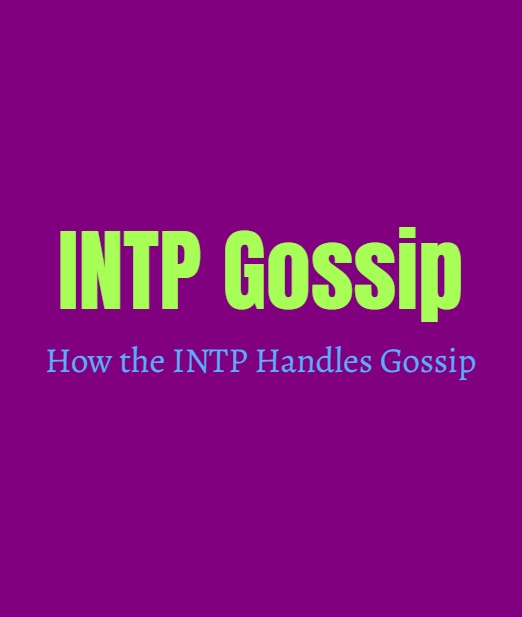 INTPs are often seen as independent people who keep to themselves most of the time. Because of this, people don’t usually peg them as being all that interested in gossip or anything related to it. INTPs try to focus on things which are logical rather than emotional, and so sometimes their behavior can be based on wanting to learn more about a situation or person. INTPs want to be capable of gathering information and will spend time analyzing it in order to know more about what is actually going on. This makes them appear curious about people when sometimes they are just curious about their behaviors and want to be able to uncover the truth.

INTPs are naturally curious people who enjoy learning about the world around them as much as they can. Sometimes this curiosity can drive them to discuss people, but for them it is more about analyzing their behavior. For the INTP it isn’t about spreading lies or drama, instead it is about uncovering the truths underneath the surface of what people want them to see. They want to be able to analyze the behavior of people, in hopes of understanding them better and learning what makes them do the things they do. They want to be able to dig deeper into the information and learn as much as they can. This is something which often drives the INTP towards being more curious and asking questions about people at times. When they are around someone they trust they are more likely to explore this curiosity, and seek to bounce ideas off of them. They might enjoy discussing certain people and want to understand their behaviors better. The INTP is even more likely to show this interest in someone they like or might want to get close to. It can appear like they are gossiping, when they are actually researching and trying to learn more about someone. Sometimes they need to ask questions and bounce ideas off of someone, but really this is tied to their Ne which drives them to hop from one thought to the next. INTPs do want to be able to keep this information private, and so when they ask questions they try to stick to people who won’t be so obvious about their interests.

When someone is gossiping simply for the sake of talking poorly about someone, the INTP often finds this draining. They are likely to zone out when they are around these people, and find themselves going inside of their own thoughts. They are naturals when it comes to ignoring people, and can slip into their minds and away from the annoyances around them. INTPs just don’t like being around this type of shallow behavior, as it leaves them feeling drained and frustrated. They are exhausted easily by social situations, and so when someone is being shallow or chatting about something which feels trivial, it can really push them over the edge. They much prefer conversations which are deep and meaningful and actually provide them with something interesting to think about. They don’t like when large groups chatter and gossip about people, and will definitely not trust these types of people. INTPs have a hard time trusting people to begin with, so when someone has a tendency to gossip it makes it even more difficult for them to rely on that person for anything.

The only time the INTP might seem interested in “gossip” is because they do have a tendency to be nosy about things. INTPs don’t like when it feels like they are so close to learning something and yet they cannot quite grasp it. If someone they know is sharing parts of themselves but keeping certain things a secret, the INTP often wants to learn more. This natural curiosity does sometimes come off as gossipy, since the INTP will want to figure out more about that person any way they can. While they might not be naturally people focused, INTPs do care about learning more about everything and this often includes the people they start to get close to. The more they like someone the more they want to learn, but INTPs don’t want to push that person to share. This can cause them to attempt to find ways to fill in those blanks and figure out what is missing or what they are hiding.

What Are Their Boundaries

For the INTP the boundaries can be difficult to find at times, since they are more likely to push against them. They don’t gossip for the sake of “fun” or simply because they want to join in a social group. This is where the INTP becomes rather annoyed and often painfully bored of gossip. For them it is about curiosity and wanting to know more, and so when they are in search of knowledge it can be difficult for them to really set down boundaries for themselves. Once they start digging deeper they often want to uncover the details, and that natural curiosity does get the better of the INTP more often than not. They definitely don’t intend for this to be harmful, and they are highly unlikely to share what they uncover with anyone outside of the person themselves.