Here’s How You Handle Friends with Benefits, Based on Your Personality Type 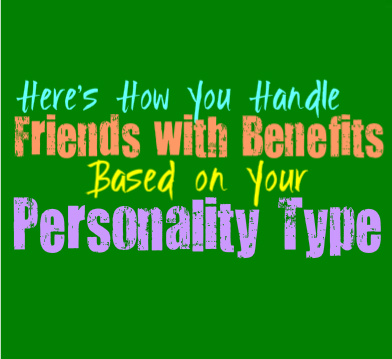 Here’s How You Handle Friends with Benefits, Based on Your Personality Type

INFJs aren’t usually comfortable with the idea of friends with benefits, since it can feel like a bad idea to them. Sharing something so intimate with someone they already care for, but only making it casual, seems like a recipe for heartache to the INFJ. They realize that someone is going to get their heart broken, and oftentimes it is the INFJ who develops feelings. They rarely find themselves interested in connecting sexually with someone unless there is already an emotional connection, which makes the idea of friends with benefits rather risky.

ENFJs often believe that commitment is important, but might explore different options when they are younger. They might get sucked into the idea of friends with benefits, especially if it seems like a fun experience. Ultimately the idea isn’t really suited for the ENFJ, since they are more interested in making lasting connections. They also don’t like the idea that someone might get hurt in the situation, which leads them to disliking the idea of friends with benefits entirely.

INFPs usually find the idea of friends with benefits to be a bit foolish, since it runs the risk of someone getting hurt. They are sensitive to their own inner emotions, as well as the emotions of others. For the INFP taking a risk of losing a friendship simply to scratch an itch, seems truly pointless. INFPs don’t like anything that seems meaningless, and to them simply wanting to use someone close to them for sex, is truly not a good or morally fair idea. The idea of sharing this experience with someone they care for might seem nice, but the fact that it is meant to be casual is definitely risky for the INFP.

ENFPs might enjoy playing around with the idea of friends with benefits, especially during their younger years. They like trying new things and want to be able to fully experience life without reservations. While the ENFP might try out friends with benefits, ultimately they will discover that it really isn’t right for them. They don’t like having their feelings toyed with, and when they feel a connection to someone it can definitely crush them to lose that bond. ENFPs are more interesting in lasting relationships, and don’t like swimming in the shallow end of the pool (metaphorically, of course).

INTJs aren’t usually interested in shallow connections, but they might try out the idea of friends with benefits when they are younger. For the INTJ sharing a connection with someone has to involve trust, and the idea of friends with benefits might have some logic to it. They might see health benefits of sex, and feel like being able to have someone they trust to share this with isn’t such a bad idea. Often when they get older this become pointless to the INTJ, since they only want to make connections that they know have true meaning and will last.

ENTJs aren’t often interested in casual connections, but they might give a try when they are younger. The idea of friends with benefits at least means they are sharing this with someone they can trust. For the ENTJ it might be worth the experience, but ultimately ends up being a bad idea for them. They would rather not waste their time and energy on someone unless they know there is a future there. ENTJs want to make long lasting and loyal bonds, ones that they value and don’t want to risk losing.

INTPs are curious people by nature, which sometimes inspires them to try something new. While INTPs are much more interested in serious commitment, the idea of friends with benefits might intrigue them when they are younger. The less mature INTP simply wants to test things out and see how they respond to them, so they might try connecting with someone in this way. While they might give it a shot, the INTP often finds the experience to be a bit hollow, and they will grow tired of it quickly.

ENTPs are curious people who enjoy being able to try something new. They don’t like holding themselves back from new experiences, since they often learn the most from diving right in. The ENTP will likely find the idea of friends with benefits interesting, especially when they are younger. They will want to give it a try with someone they know and trust, but might not consider that someone could end up getting hurt. When this happens the ENTP will likely try to make the situation right, and will probably move on from these types of connections.

ISTJs aren’t often interested in casual connections, and the idea of friends with benefits often seems pointless to them. They don’t like wasting their energy on something that won’t develop into a lasting relationship. For the ISTJ these types of relationships often feel shallow and really aren’t of interested to them. They would rather search for someone who is serious about them and willing to commit to what they have.

ESTJs are often more interest in commitment, so the idea of friends with benefits seems pointless to them. When they are very young they might be intrigued by the idea, especially if it seems like the popular thing to do. When ESTJs mature this often become foolish to them, since they are much more interested on building a future for themselves and with someone they care for.

ISFJs really aren’t the friends with benefits type, since they are more interested in real connections. They don’t like wasting their energy in a situation where one or both of the people could get hurt. ISFJs are more interested in finding someone who will commit to them, instead of just make a shallow meaningless connection. ISFJs don’t like risking their emotions or the emotions of others, instead they want to find someone who they can share their lives with.

The idea of friends with benefits often seems completely pointless for ESFJs. They aren’t usually interested in being with someone in this way, instead they value commitment and sincere emotions. ESFJs want to find someone who will love them and want to be with them forever, not just for a short amount of time. For the ESFJ friends with benefits often seems like a waste of time, and a way for someone to get their feelings hurt.

ISTPs might find the idea of friends with benefits interesting, mostly because they enjoy trying new things. They will likely enjoy the experience for a while, but will most on when they become bored. ISTPs ultimately are willing to commit when they find the right person to share their lives with. For the ISTP it is okay to enjoy living in the present while they can, so friends with benefits might be something they want to give a try once in a while.

ESTPs enjoy experiencing life to the fullest and simply want to live in the moment. They seek out excitement and adventure wherever they can, and don’t like remaining stagnant for too long. When the ESTP has an opportunity to experience something that seems enjoyable, they certainly aren’t afraid to dive in. For them friends with benefits can be something fun to try out, especially with someone they like and trust.

ISFPs might enjoy trying new things from time to time, so the idea of friends with benefits might appear fun in the moment. While ISFPs might like to try out this experience, they ultimately will grow tired of it. More than anything the ISFP wants to find a deep and meaningful connection, since they do feel things so deeply. They will become bored with shallow connections, constantly in search of something that is truly valuable to them.

ESFPs enjoy living in the present and sometimes they simply like experiencing new things without feeling restrained. ESFPs might try out friends with benefits from time to time, just to see how the experience feels to them. They enjoy being able to seek out passion and adventure in their lives, and aren’t afraid of taking risks. While ESFPs will definitely enjoy the experience, they ultimately will grow tired of it. They deeply want to find someone to connect with who appreciates and loves them and will stick around.