Here’s How Strong Your Resting Bitch Face Is, Based on Your Personality Type 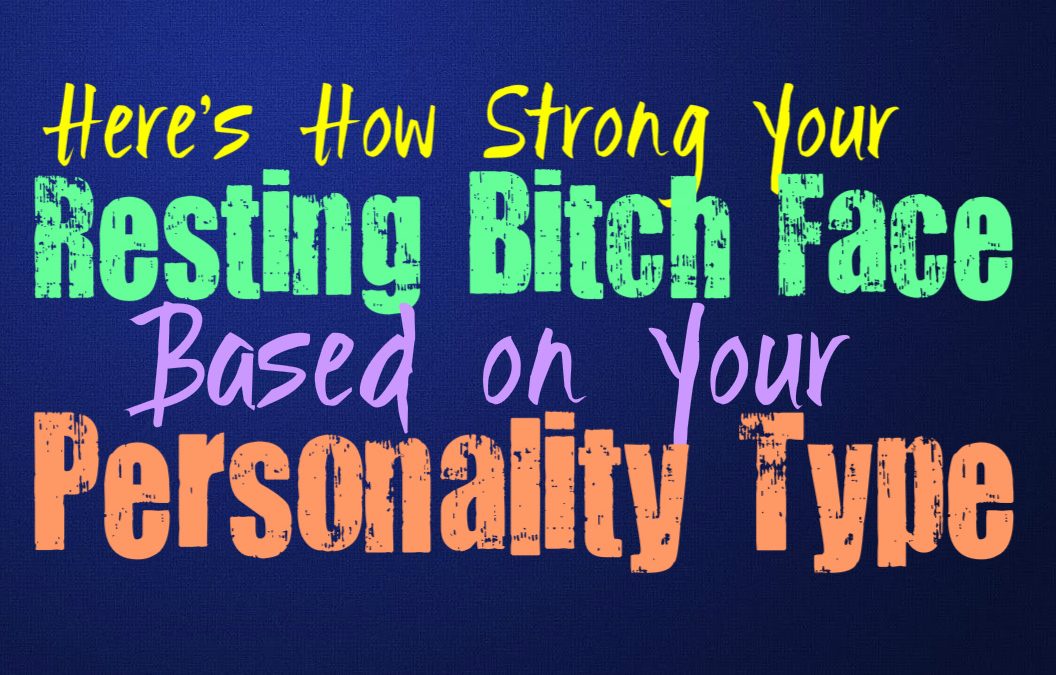 Here’s How Strong Your Resting Bitch Face Is, Based on Your Personality Type

While having resting bitch face simply means that your natural expression is a bit stern and even angry, it doesn’t mean the person is actually feeling those emotions. Sometimes this comes from having an active inner mind, and a struggle to express their happy emotions outwardly. Here is how strong your resting bitch face probably is, based on your personality type.

INFJs often have a resting bitch face situation, even when inside they are feeling joyful. They simply have such rich and active inner worlds, which sometimes causes them to be caught up inside themselves. When the INFJ is exploring their own thoughts this sometimes causes their outside expression to be intense or even appear standoffish. When people get to know the INFJ they realize how caring and compassionate they are, but sometimes their resting face says the opposite.

ENFJs are often cheerful and supportive people, who try not to express anything negative towards others. There are times when their expression can seem a bit moody or angry to others, this is when the ENFJ is inside of their own thoughts. They can become caught up inside of their rich inner minds causing them to appear a bit frustrated on the outside. When the ENFJ is focused on their surroundings they try to make sure they express themselves in a positive way.

INFPs have such complex inner emotions, that sometimes their expressions aren’t what they realize. Many times the INFP might be caught up in their own deep thoughts and feelings, and sometimes their face can appear a bit moody and even angry. They wear their heart on their sleeves, and sometimes even on their face. Oftentimes the INFP might have a happy resting expression, or even a moody one, it entirely depends on their mood and what their thoughts inside are.

ENFPs are usually happy and positive people, who try to keep the mood around them good. While ENFPs often try to focus on bringing joy to themselves and their loved ones, there are moments when they have a bit of resting bitch face. When the ENFP is caught inside of their own deep thoughts, their expression can seem intense and even angry. This often happens without the ENFP even realizing it, and it can surprise the people around them since they are often so positive.

INTJs usually have very strong resting bitch face, and this comes from the fact that they have such rich inner minds. They have such rich inner minds that the INTJ can become caught up in an intense and detailed thought, causing their outer expression to be penetrating and even angry. INTJs don’t intend for this to happen, they simply aren’t all that aware of the outside world when their minds are running through something important.

ENTJs can often have strong resting bitch face, mostly because they are such intense people. There are times when their inner thoughts take them over and cause them to seem angry or upset when they aren’t. This is simply because they have so much running through their minds that it is challenging for them to really focus on the world around them. They don’t want to bring others down or seem negative, but sometimes they do have a rather intense outer expression.

INTPs often have a strong resting bitch face, and this is entirely unintentional. INTPs have truly rich and extremely active inner minds, and have a hard time really pulling out of this inner world. Oftentimes the INTP will be focused on their thoughts and not really aware of their expressions or what is going on around them. People will look at the INTP and see an intense expression which might even seem like they are angry, while inside they are simply working through a problem or new idea.

ENTPs can sometimes have resting bitch face, especially when they are thinking about something. ENTPs try to remain positive and don’t like bringing down the mood, so often they will have a lively expression. When they do have a somewhat moody look on their face, it is because the ENTP is distracted and thinking about something else. They simply have such rich inner minds that they aren’t always aware of the outside world.

ISTJs do often have resting bitch face, simply because they aren’t the most outwardly expressive people. There face can seem rather moody sometimes, with an intense and focused expression. ISTJs try hard to get things done and are always wanting to take care of the important responsibilities in life. They aren’t really connected to expressing emotions, so sometimes this reads on their face in a way that definitely seems like RBF.

ESTJs are intense people and sometimes this can translate to a bit of resting bitch face. They aren’t the most emotionally expressive people, and they don’t find it easy to really focus on their outward expressions. Sometimes this means that the ESTJ will definitely have a moody look on their face, when they are simply focused on something or thinking about something they need to get done.

ISFJs aren’t often seen with a resting bitch face, since they try to keep things positive. They often are conscious of their expressions and of the people around them. ISFJs just want to make others happy and believe in creating a sense of harmony in their environment. They don’t want their expression to bother or upset someone, so the ISFJ definitely tries to be sure they don’t have a negative look on their face.

ESFJs don’t usually have a resting bitch face, since they are conscious of the people around them. They want to bring peace to their environment and dislike doing anything that might upset others. ESFJs try to make sure that they don’t put off a negative look that might bother others. They usually try to make sure that their outward expression is pleasant and inviting.

ISTPs can definitely have resting bitch face, especially if they are thinking about something. They can sometimes be intense people and aren’t always focused on their outward expression. They aren’t really good at picking up on the expressions of others, and at the same time they aren’t good at recognizing the emotions their expressing to others. ISTPs can definitely have resting bitch face if they are internally trying to think something through or solve a problem.

ESTPs can definitely have a strong resting bitch face, especially when they are working or focusing on something. They become rather intense when they are trying to solve a problem or get something done. ESTPs aren’t always great at outwardly conveying the emotion they want, especially if their thoughts are elsewhere. They are usually positive people who don’t like being grumpy, but at the times they do have a grumpy expression.

ISFPs are normally positive people with a welcoming and friendly vibe. They have times when their intensity can make them seem outwardly focused, but they rarely have a resting bitch face. ISFPs normally have a positive and joyful resting expression, since their feelings can easily be written on their face for others to see.

ESFPs rarely have a resting bitch face, since they are normally positive and pleasant people. They like being able to bring positivity to the world around them and don’t like allowing anything to bring them down. The resting face of the ESFP is normally welcoming and friendly, showing others what kind of happy and joyful person they truly are on the inside.