Here’s How You Handle Goodbyes, Based on Your Personality Type 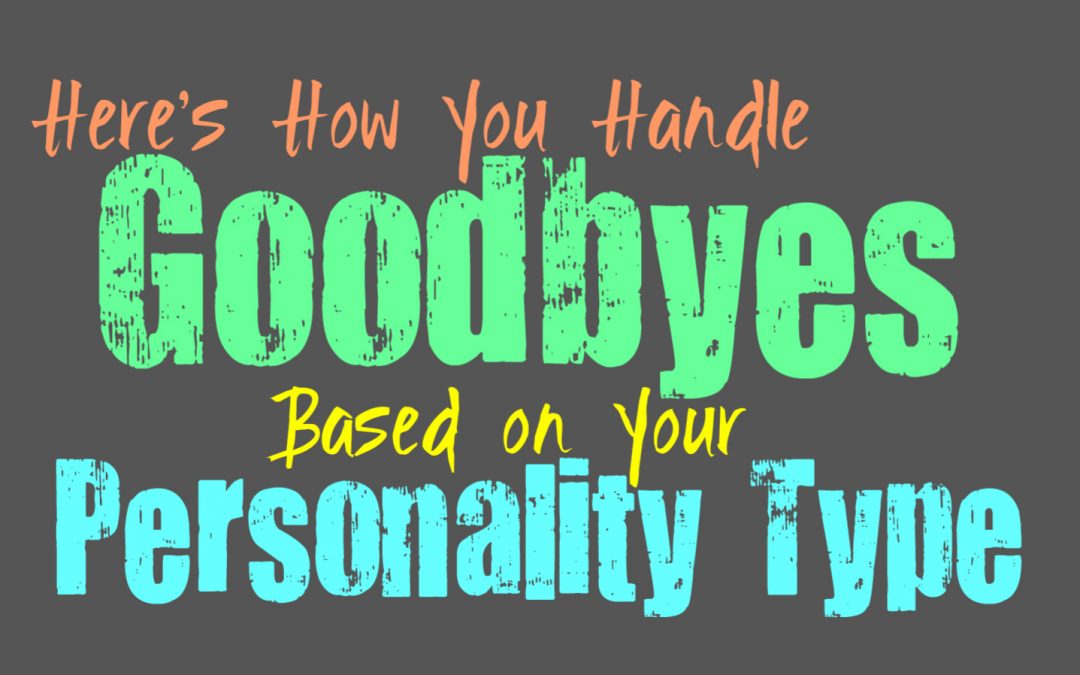 Here’s How You Handle Goodbyes, Based on Your Personality Type

For some people saying goodbye is often far too difficult, for others it is a reasonable part of life. Here is how you handle saying goodbye, based on your personality type.

INFJs can often struggle with goodbyes, especially with someone or something that means a lot to them. When the INFJ is committed and connected to someone, they don’t believe in letting them go. They do their best to make things work and want to hold on for as long as they can. When the INFJ does finally realize that goodbye is inevitable, it can be extremely difficult for them to handle. They try their hardest to keep close to the ones they love, and having to say goodbye will definitely be overwhelming for the,. Eventually they can move forward, but INFJs can have a hard time with this process.

ENFJs definitely dislike saying goodbye, and often try to fight this as hard as they can. They take their commitments very seriously and believe in standing by the people and things that they love. Instead of saying goodbye the ENFJ will often fight this, and will try their hardest the make things work. When they do realize that they have no choice but to say goodbye, they will certainly struggle with this internally. They might be in denial for a while, or even be angry over it, ultimately the ENFJ will find a way to move on but will keep a piece with them forever.

INFPs have a hard time saying goodbye, and might even try to put it off as long as they can. They don’t want to let go of things that mean a lot to them, and will fight with everything they have. INFPs can sometimes be in denial when it comes to having to say goodbye, they simply don’t believe in letting go of something that truly matters to them. When the INFP realizes that they have no choice but to say goodbye, they will simply need time to reflect on their feelings in order to come to terms with what is happening.

ENFPs definitely struggle with goodbyes, especially when they truly care on a deeper level. They will be perfectly capable of saying goodbye when it seems necessary, but will fight for what matters to them. If the ENFP truly loves someone and feels connected to them, they will do whatever they can to keep them in their lives. They might not even accept goodbye from that person, and will try to find a way to make things work. ENFPs can handle smaller goodbyes, since they aren’t afraid of change of moving. They only struggle to say goodbye when they believe it is not the right thing to do.

INTJs are practical people, who realize that sometimes goodbyes are simply a part of life. They might struggle with some goodbyes, since they aren’t always fans of change. At the same time they will work to overcome these feelings in order to do what makes the most sense. INTJs are logical people who will try to focus on observing the situation with an objective mindset. This helps them say goodbye, especially when it is clearly the best choice.

ENTJs might struggle with saying goodbye to certain people or things, especially when they feel strongly connected. They work hard to build lasting relationships and connections, and don’t want to let go of them once they have committed. When the ENTJ does see that goodbye must happen, they will try to look at the situation objectively and logically. It can be challenging for them and they will certainly do their best to keep the relationships and things that matter, before having to say goodbye.

INTPs try to approach things in their lives with a sense of logic and facts, which often helps them when it comes to saying to goodbye. While they can struggle with moving on from people who mean a lot to them, they prefer to focus on what makes the most sense. They try to observe from an objective point of view instead of allowing their emotions to take them over. The INTP might be willing to say goodbye in some ways, but at the same time they often stay connected to these people or things they have let go of.

ENTPs aren’t afraid of change and often enjoy being able to experience new things. They will take on challenges and this often helps them say goodbye when they have to. They often believe in approaching things from a logical and objective point of view, and sometimes they need to put their feelings aside in order to do this. While the ENTP might struggle with goodbyes at first, eventually they can come to terms with them if it is the best decision to make.

ISTJs often dislike goodbyes and change in general. When they have to move forward it can be challenging for them, especially when they have committed to something or someone. ISTJs don’t like having to say goodbye and will often try to find a way to fight this. They prefer to remain connected to the things that matter most to them, and truly don’t want to let go when they don’t feel like they should.

ESTJs definitely aren’t fans of goodbye and often try to avoid this entirely. When they are committed to someone or care for them deeply, the ESTJ will do everything they can to remain with them. While they aren’t the most outwardly emotional people, they actually feel things deeply. When the ESTJ cares for someone they will often have a very hard time letting go of them and believe in standing by their commitments.

ISFJs really don’t like saying goodbye and often have a hard time accepting this. When they care for someone or are committed to them, they don’t want to move on from this person. ISFJs will do everything they can to keep their commitments and want to remain connected to the people they love. They often struggle with change and don’t like having to move on, even when it seems like they have to. Ultimately the ISFJ will be capable of moving forward, but they don’t enjoy having to do this.

ESFJs often struggle with change, and prefer to keep things comfortable and familiar. They have a hard time moving on from the ones they love, and saying goodbye is often extremely difficult for them. They want to remain connected to the people in their lives and will try to avoid letting go. ESFJs don’t like backing out of a commitment, and so saying goodbye is often extremely challenging for them.

While ESTPs are independent and strong-willed people, there are times when they struggle to say goodbye. They believe in moving forward and don’t like remaining stagnant for too long. In most situations ESTPs are capable of saying goodbye, except for when they are emotionally connected to a situation. Sometimes they feel like they aren’t quite ready to move on, and so the ESTP will have a hard time saying goodbye.

ISFPs believe in moving forward and this can often help them say goodbye when it feels right. ISFPs believe in doing what is best for themselves and their loved ones, and so they will say goodbye if it is best. While ISFPs are capable of moving on, it is often painful for them every time they have to. The ISFP will mourn this situation and be sad that they have to move on, but eventually they will bounce back.

ESFPs don’t enjoy standing still and will enjoy being able to move forward. They don’t like being stuck in the same place for too long, since they want to live their lives to the fullest. When the ESFP does feel connected and bonded to someone, saying goodbye can become rather difficult. They want to feel loved and close to the people that truly matter to them, and saying goodbye in these situations becomes impossible.