How Do You Respond to an Elitist Attitude, Based on Your Personality Type 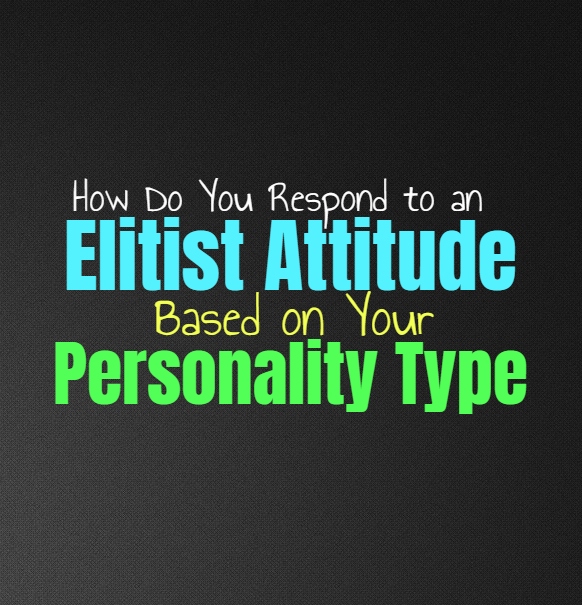 How Do You Respond to an Elitist Attitude, Based on Your Personality Type

Some people don’t mind that things can be elitist and closed off, while to others this is entirely unjust and upsetting. These people believe things should be fair and that people should not be judged based on these elitist ideals. Here is how you are likely to respond to an elitist mindset, based on your personality type.

INFJs really don’t appreciate a more elitist mindset, and often are a bit repelled by this. The idea that certain people should be in control based on things like, money, appearance or even intelligence, isn’t fair to them. They believe people should have more of a say in how their lives are, and don’t appreciate this idea that only the chosen few should reap certain benefits. INFJs don’t like the idea of anything being unjust or unfair, since their inner beliefs and morals would not allow for accepting these types of things. Even if the INFJs has grow up in a more elitist environment, this will often be something they challenge and move away from.

ENFJs do often find themselves feeling a bit disturbed by the idea of an elitist lifestyle or attitude. They care about people and believe that things should be done fairly and not based on shallow ideals. ENFJs who have been raised in these environment might be even more bothered by them, since they can see the lifestyle and start to feel a strong sense of empathy towards those who aren’t allowed in. ENFJs really care about people and want to see them happy, and so alienating those who don’t have wealth or good looks can feel unjust.

INFPs are often strongly against any type of elitist mindset, since they care about ensuring that everything around them is fair. INFPs have strong inner morals and strive to behave justly and fairly. For them the idea of an elitist way of living means alienating people based on things they often perceived as deeply shallow. They don’t believe that people should be judged this way, and almost always will be strong against it. INFPs are rarely elitist people, and if they do get sucked into this it often sits poorly with them and leaves them feeling a strong sense of inner guilt.

ENFPs are often difficult to predict when it comes to things like their personal goals and beliefs, but they rarely are drawn to an elitist mindset. ENFPs who are around this type of lifestyle can actually become even more distrusting of it, and want to avoid people who will cut others out for lacking in certain elite qualities. ENFPs enjoy a sense of freedom and in this type of lifestyle they often lack this, they have to keep up appearances and this isn’t something they are interested in or drawn to.

INTJs can sometimes be accepting of a more elitist mindset, since they often naturally see that life isn’t made up of everything being fair all of the time. INTJs are more elitist when it comes to intelligence and often believe that people with strong minds should be in positions of control. They can become frustrated by people who are not efficient or capable of getting things done right, and so they don’t like allowing these people into positions they don’t feel they are worthy of. INTJs can be elitist because of this sometimes, but they don’t necessarily believe that everything should be about being open.

ENTJs don’t really become hung up on things being unfair, since they realize that not everything in life is made up on what others deem as fair. While they believe in justice, they realize that life is also about working hard and overcoming hurdles which others put in front of them. They do sometimes find themselves accepting certain elitist ideals, especially when it sets apart people who are more intelligent and efficient rather than people who aren’t as capable.

INTPs can often go back and forth with their opinions and beliefs about an elitist attitude. INTPs enjoy remaining open-minded and so they often explore different sides of something before really settling on what they truly believe. They might be able to understand why some people favor a more elitist mindset, especially if they have been surrounded with this most of their lives. At the same time INTPs can battle against this, especially if deep down they feel like it is immoral and something which should be changed.

ENTPs can sometimes get caught up in a more elitist mindset or lifestyle, especially if this is how they were raised. While ENTPs to challenge authority and challenge just about everything they know, this doesn’t mean they don’t also find themselves connected to some of their roots. There are times when they can find themselves drawn to an elitist mindset, since it gives them a feeling of more control and opportunities to explore different avenues that others might not be able to to.

ISTJs are more focused on work ethic and fortitude, and so the idea of things being closed off based on elitist ideals can be rather unjust to the ISTJ. They want to feel like anyone can achieve their goals and get where they want to be if they push themselves and are smart enough. ISTJs don’t want to feel like doors are closed off to them because of foolish reasons, but even still they are willing to push past these walls and make it where they want to be.

ESTJs don’t like to become obsessed or focused on the idea of things being too elitist or unfair. Instead they just want to find ways to overcome their struggles and accomplish their goals. ESTJs don’t really care about things being elitist unless this stands in their way and prevents them from achieving what they want in life. When these situations hold them back they often start to feel much differently.

ISFJs often base some of their morals on how they were raised and so this affects how they feel about a more elitist lifestyle. ISFJs care about people but if their upbringing has surrounded them with more elitist people this can sometimes become what they are more used to. They may change and adapt as they get older though, since ISFJs care about people and don’t like seeing anyone who feels left out or alienated.

ESFJs can sometimes be drawn to what they know and how they are raised, and so they might become adjusted to a more elitist mindset, or something more down to earth depending on their upbringing. While they do become adjusted to certain things, ESFJs care about people and want to make others happy. They don’t like being in a situation where they have to let others down or see them being closed off from things because they don’t have a certain shallow quality.

ISTPs don’t like the idea of anyone being left out because of some ridiculously elitist mindset. ISTPs want things to be more open and free and not so closed off simply because of certain natural traits of upbringings. They want to be free to open doors without having things shut down because they don’t fit into some specific category.

ESTPs don’t really like when things are elitist, and often find ways to challenge this. They have a desire to fight against things and challenge authority, sometimes just for the experience of it. ESTPs don’t want others to control them or obligate them to certain ways of living. For them elitist mindsets seem a bit unfair and unjust, and rarely are the ESTPs okay with this.

ISFPs really don’t enjoy an elitist way of living, instead they become disturbed by this. They want things to be fair and the idea of shutting people out because of it. ISFPs have strong inner morals and don’t believe in shutting people out because of shallow ideals. For the an elitist mindset really isn’t something they support naturally, instead their free and sensitive nature isn’t really connected to this.

ESFPs sometimes are okay with things being elitist, especially if they are in the in-crowd. For the ESFP it depends on their environment and how they were raised. If they grew up in a situation where the elitist lifestyle is accepted then they might be accepting of this because of that. Most of the time though ESFPs just want to live in the present and enjoy whatever experiences come their way, so they don’t like getting caught up in these types of ideas.