Do You Enjoy People Watching, Based on Your Personality Type 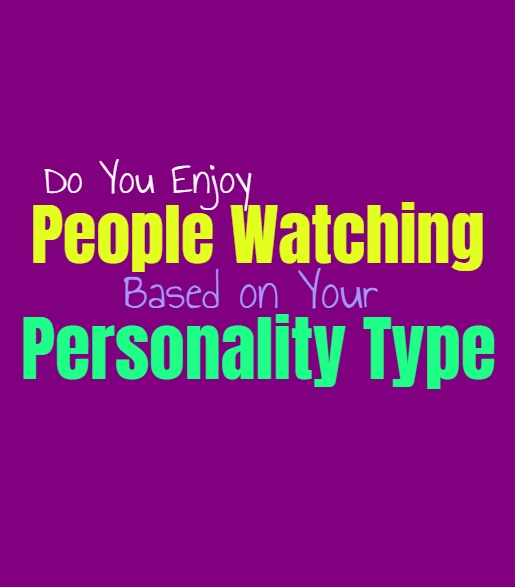 Do You Enjoy People Watching, Based on Your Personality Type

For some it can be enjoyable to observe others and watch their behavior when they think no one else is looking. They can learn from their responses and enjoy taking all of it in and working to understand human nature much better because of it. For others this can seem like a waste of their time and energy and isn’t a hobby they really enjoy all that much. Here is how you feel about people watching, based on your personality type.

INFJs might actually enjoy people watching, since they can observe without feeling drained by the interaction. They enjoy paying attention to people and how they behave and often want to learn from their behavior. INFJs also like the idea of observing people in order to see how they behave when they think nobody’s looking. For them it is about understand the true nature of people, and sometimes this can be a positive thing when they notice that some people hide a lot of their inner beauty from others. INFJs do prefer to have someone special they can people watch with, sometimes making it more of a playful game.

ENFJs observe people constantly, since they are naturally drawn to others and want to understand them. For the ENFJ people watching is just a natural part of their lives, since they care to understand others and pay attention to their behaviors. ENFJs also want to be able to help others, which often means observing them so that they can understand their needs and desires. People watching is simply how the ENFJ learns the best means of helping others and can strive to make their lives easier for them.

INFPs don’t mind observing people and different things around them, since they can sometimes be wallflowers. For the INFP it can be enjoyable to pay attention to how others behave when they aren’t fully aware that they are being watched. It is more about trying to understand their responses and catch a glimpse of what is underneath their walls. INFPs sometimes feel more rewarded just observing people, than actually interacting with them constantly. They do however want to have someone they can interact with and connect with on a deeper level.

ENFPs do sometimes enjoy people watching but they are more inclined to interact and make connections. ENFPs sometimes enjoy seeing how people behave around them, but at the same time they are often more interested in learning firsthand. They don’t usually like standing in the shadows waiting for something to happen, instead they prefer to jump in themselves and make things happen. For the ENFP people watching can seem a bit mundane, since they aren’t naturally inclined to just sit back and watch.

INTJs don’t really find themselves drawn to most people, but sometimes observing them can be useful. If the INTJ feels like they can learn from this, than people watching can be something they will entertain. They do want to understand people better, since this can help them in many future situations. INTJs don’t like walking into any situation ignorant and so they will often spend time learning about people and how to navigate them. For the INTJ people watching is more about using the information in front of them for future needs.

ENTJs are often more interactive people and so just observing from the shadows isn’t really their style. They are more likely to learn about people by getting a closer look, rather than just watching them from a distance. ENTJs just aren’t naturally people watchers, since they focus on getting things done quickly and efficiently. Having to sit back and watch without actually doing something themselves, can feel a bit fruitless at times.

ENTPs can sometimes be skeptical people and so they might enjoy people watching to see how others behave when they think no one is watching. ENTPs enjoy exploring many different means of understanding people and the world around them. In most situations they prefer to interact and dive into things in order to understand them, but that doesn’t mean they won’t occasionally take a different approach. Sometimes the ENTP enjoys people watching as a means of observing and understanding how others might behave.

ISTJs aren’t really fans of people watching, since they can be a bit more focused on their own business. They focus on getting things done and don’t really feel the need to watch or observe others for any valid reason. ISTJs believe in being efficient and polite and so most of the time this includes minding their own business. They might even find the idea of people watching to be a bit creepy, unless this is just them observing their loved ones when they know they are present to do so.

ESTJs do believe in observing their surroundings and learning from them, but they don’t want to sit around watching for too long. ESTJs are also more interactive people who learn best from having actual conversations with others, rather than just observing them. For the ESTJ sitting back and people watching can feel a bit weird and even a bit pointless. They focus on being efficient and want to be capable of getting things done, often without needing others to do this.

ISFJs might be inclined to people watch, but only in the hopes of understanding others better. They want to be able to help their loved ones and sometimes this requires observing them to figure out what their hopes and goals are. ISFJs pay attention to the people around them because they want to be capable of creating harmony in their environment and working towards making everyone happy. ISFJs people watch because they care about people, and devote much of their time towards others.

ESFJs can sometimes enjoy people watching because they like to observe and understand those around them. For the ESFJ paying attention to how people behave can help them to understand their needs and desires better. For the ESFJ people watching is about being able to understand their loved ones and find ways to make them truly happy. They care about creating a sense of harmony in their environment, and so sometimes this requires taking time to observe those around them.

ISTPs aren’t usually inclined to people watch, but there are times when this might be entertaining for them. If people are amusing or behaving in ways which might be interesting for the ISTP then they are more likely to people watch. They enjoy living in the present and seek out the things which will excite and challenge them in positive ways. ISTPs don’t like obsessing over pointless details, and so sometimes people watching can feel a bit draining for them.

ESTPs might sometimes enjoy people watching, but more likely if they are doing this with a friend. They enjoy observing people especially if this can be entertaining in some ways. Most of the time though ESTPs are more likely to interact with others rather than just observe them. They are people who prefer to focus more on action and enjoy living in the present moment. For the ESTP it is better to interact with people in order to understand them, rather than just observing them.

ISFPs might enjoy people watching sometimes, especially if they do this with someone. For the ISFP it can be enjoyable to pay attention to how people behave and respond, maybe even making up stories for them inside of their minds. They like to observe the world around them, but they also want to interact and experience things firsthand. ISFPs live their lives with a combination of observing and also want to take action.

ESFPs do enjoy observing people but they are far more interested in interacting with them. They often find themselves wanting to step in when they have observed people, wanting to get to know them much closer. ESFPs aren’t really good at observing things from a distance because they want to be involved. They learn better firsthand and by really diving into things without having silently wait and observe.