What Qualities Make You Good at Dealing with Children, Based on Your Personality Type 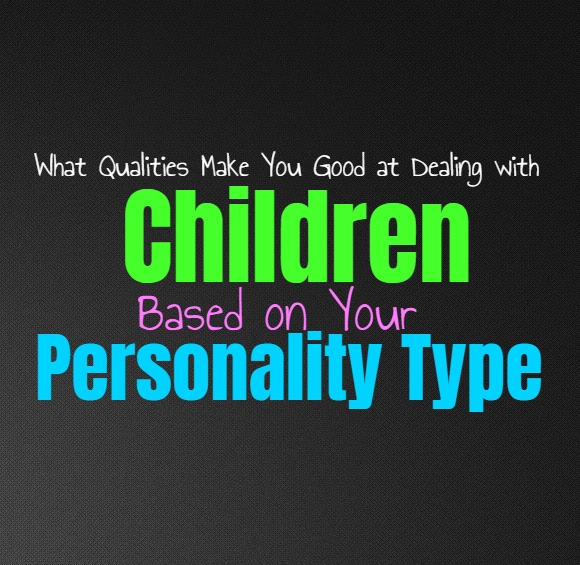 What Qualities Make You Good at Dealing with Children, Based on Your Personality Type

Not everyone is comfortable being around kids, they just don’t know how to deal with them. For others this is something which comes naturally and doesn’t feel like much of a struggle. While not everyone wants to have their own children, that doesn’t mean they don’t want to get to know the kids in children in their family. Here is what might make you more capable of being good with kids, based on your personality type.

INFJs are often good with children, maybe even better than they are with adults. INFJs often feel like they can connect to the innocence and creativity of children, and really appreciate their honesty. They can get along with kids fairly easily, which is often what makes INFJs great parents. They don’t like trying to push their own beliefs onto kids, and actually give them room to be themselves. This is something which makes most INFJs comfortable with kids, because they treat them like their own people instead of undermining them.

ENFJs are often naturals with children, mostly because they are family oriented people. They can be major people pleasers though, which sometimes causes them to go over the top with spoiling. ENFJs often enjoy children, and are good at taking care of them and being supportive. They want to nurture children to be themselves, and don’t like being controlling. ENFJs don’t usually feel awkward around children, and might even want kids of their own. While some people aren’t really sure how to talk to kids or be around them, ENFJs have a naturally nurturing personality.

INFPs might actually like kids more than adults in some cases, simply because they are honest. INFPs value sincerity and often find themselves admiring the sense of innocence in children. They might want to preserve this purity, hoping to keep kids innocent and sincere for as long as they can. INFPs also want to maintain a childlike enthusiasm in their own lives, since they feel it is important to always be themselves and stand up for their inner beliefs. INFPs are also creative people which really helps them entertain children and make them feel comfortable.

ENFPs are often great with kids, mostly because they have childlike qualities themselves. ENFPs know how to connect with kids because they are creative people who enjoy exploring their imaginations. They often maintain a lot of qualities from their childhood, mostly because they believe in being themselves and not allowing the world to change them. ENFPs can connect with the honesty and creativity of children, which makes them great at understanding children.

INTJs can actually be good with kids because they don’t necessarily treat them like they are less valuable than adults. They can communicate with kids and be honest with them, which makes them feel like they actually matter. INTJs might be a bit hesitant to be around children though, since it can feel like a lot of responsibility and time taken away from doing what they want to do. If the INTJ does decide to have children of their own, they take this seriously and likely won’t rush into it. INTJs understand that it is important how they act around impressionable minds, and this is something that actually makes them better around kids.

ENTJs often provide a sense of equality with children, and don’t like treating them like they aren’t valuable. They also know how to be supportive and provide for them, which is something that makes them great parents. ENTJs do whatever it takes to provide for their own kids, and even want to be there for their family members children. This is something which helps them around children, but they do have sometimes gruff and stern personalities which can be a bit unnerving for some kids.

INTPs are creative people and this sense of imagination is exactly what helps them connect with children better. They know how to follow the sometimes unusual thought patterns of kids without making them feel odd. INTPs often feel misunderstood themselves and so they don’t like doing anything which might make children feel the same way. They do their best to show their support and listen to them openly without making them feel judged or odd.

Their imaginations and creativity is exactly what helps ENTPs connect better with children. While they might not always be good at the organizational part of parenting or babysitting, they are good at knowing how to have fun. ENTPs are creative and can help children have fun and explore their inner potential. They don’t believe in controlling them or stifling their creativity or spirit. ENTPs believe inspiring children to be themselves and explore whatever feels right for them by helping them follow their own path.

ISTJs are often good at dealing with children because they do their best to teach them how to understand things better. The only struggle is that sometimes ISTJs can be rule following people and this can leave kids feeling a bit stifled. At the same time they do know how to set boundaries and teach children how to properly care for important things in life. This gives them a sense of structure and definitely makes them more equipped to handle the real world.

ESTJs often do their best to communicate with children, but they can be somewhat stern people. The main thing which helps them understand and deal with children better, is their sense of sincerity. ESTJs will do their best to be upfront about things, instead of trying to sugar coat it and lie to children. ESTJs can be somewhat structures people though, and this can make it more difficult for them to connect with kids.

ISFJs are compassionate people and this is what helps them deal with and understand children better. They do their best to be sincere and to comfort them, instead of being harsh. ISFJs are naturally very nurturing people and this helps them connect with kids easily. They do their best to take care of them and don’t struggle to connect with children at all. ISFJs are often the type of people who enjoy being around kids and definitely want to have a family of their own.

ESFJs often love children, usually wanting to have a family of their own someday. ESFJs are nurturing people who enjoy being around children and want to make them feel safe and loved. They do their best to bring out their creative side in order to help the kids feel understood. They do their best to listen and be supportive to what children have to say, hoping to bring them a sense of love and comfort.

ISTPs might feel a bit odd around kids, especially the idea of having their own. This is simply because they can be a bit anxious about responsibility and having to be around kids means having to pay attention to their needs instead. ISTPs can however be fun and creative people which are qualities that really help them when it comes to being parents or babysitting. They do their best to be supportive and just make things fun for the kids.

ESTPs might not be interested in having kids of their own, since they can feel like too much responsibility. ESTPs enjoy their freedom and don’t like feeling as if they have to be responsible for someone else. Kids can seem like a lot of work for the ESTP, and this isn’t always something they are interested in. While they might not be drawn to the idea of having children, they do have some creative and fun traits which helps them deal with babysitting their loved ones kids fairly well.

ISFPs are sensitive free-spirits, and this is often what helps them when it comes to connecting with children. They don’t like trying to be controlling and will do their best to nurture a child’s creativity. ISFPs want to give kids space to be themselves instead of trying to force them to behave a certain way. This openness is something which helps ISFPs become great around children, especially when it comes to babysitting.

ESFPs are truly fun people who know how to be creative and have a good time. The fact that they are such fun people certainly helps them when it comes to being around kids. ESFPs are definitely good with children, since they aren’t afraid of embarrassing themselves in order to make them happy. ESFPs simply want to make others smile, especially when it comes to children, and they often know exactly how to do this.