ESFP Flirting & Dating: How to Attract an ESFP 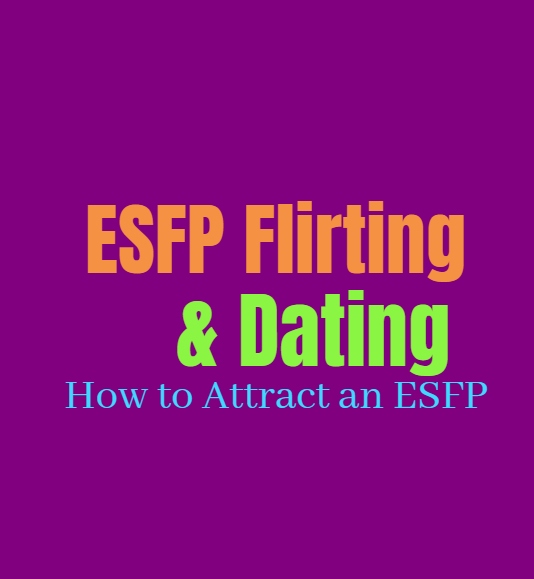 ESFP Flirting & Dating: How to Attract an ESFP

When it comes to flirting and dating the ESFP is often a natural. They are friendly and outgoing people who really enjoy making connections with other people. For the ESFP being able to connect with others and get to know them is a rewarding experience. They can sometimes appear flirtatious when their intention is just to be friendly, but sometimes for the ESFP a little flirting is harmless. They are naturals when it comes to making friends and getting to know people, which is why flirting is often something ESFPs are comfortable with as well.

ESFPs are naturally friendly people, and so they often come off as flirtatious even when they aren’t intending to. They are outgoing and enjoy finding ways to connect with people around them. The ESFP might spend hours chatting with a stranger they meet at the grocery store, simply because they spark a conversation which interests them. They are drawn to people and feel happier when they are interacting with others. The ESFP becomes energized when they are socializing with others, and this is why they enjoy making new friends and connections. Their outgoing and friendly nature often makes the ESFP appear rather flirtatious, sometimes this is not their intention. Other times the ESFP does enjoy flirting with others, but they do this in a much more innocent manner. Their intentions aren’t always to make something out of it, they just enjoy the banter and being a bit playful with someone they like being around.

When the ESFP is trying to be flirty with someone they often pay attention to what this person likes. ESFPs will want to spend a lot of time with someone when they are sincerely interested in them. They find out where this person will be and intentionally tries to be around them. Even if the ESFP doesn’t flirt directly right away, they will try and show their friendly and outgoing side in hopes that it draws that person in. ESFPs are very charming people who often know how to say the right things to make someone feel special and drawn into their orbit. They have a confidence and a way with charming people which makes flirting rather natural for the ESFP.

While ESFPs are often labelled as flighty people who cannot stay faithful, this really isn’t the case at all. ESFPs might enjoy flirting and when they are young they don’t often want to settle down right away, but once they do decide to commit they can certainly remain loyal to the same person. ESFPs are just waiting for the right connection, and so they don’t want to settle for anything less than their dreams. When the ESFP is in a committed relationship and truly has feelings for someone, they often become very focused on that person. ESFPs strive to make their partner happy and will go out of their way just to see them smile. They are surprisingly giving people, especially when they love someone and consider them close. ESFPs will notice all of the little things about the person they love most, and will remember dates like their birthdays and seek to make a big deal out of them. ESFPs know how to celebrate the people they love, and believe in going above and beyond for them. They can certainly remain loyal, it all depends on the ESFPs heart and where their focus is. When they truly love someone, they would never want to do anything to betray their trust.

ESFPs might enjoy casual dating when they are younger, since they enjoy meeting new people. For them it is often about making friends and experiencing new things. People often misunderstand this about the ESFP, and think they just want to bounce around. For them it is about making connections and figuring what they like in a partner. They often date casually until they can find the right person who makes them want to really settle down and make a commitment. ESFPs don’t really become drained by casual dating because it gives them a chance to meet people and make connections. They feel rewarded by getting to know people and often want to be able to experience these different people and even gain some fun new stories to share with their friends.

Once the ESFP does find someone they feel a real connection with, the idea of casual dating becomes a bit pointless and even exhausting. Once they see that there is someone out there they can truly make a commitment to, the ESFP wants to be focused on this and loses the desire to date other people. They just want to explore their options when they are younger, and this helps them uncover more about themselves the things they are looking for in a partner.

How to Attract the ESFP

ESFPs are attracted to confidence and people who aren’t afraid to go after what they want. They enjoy being around this type of confidence and often find themselves drawn to it. While ESFPs are attracted to people who can express themselves and share things with them, they also enjoy a bit of mystery. Having someone they have to figure out a bit, who doesn’t give it all away upfront, creates a sense of intrigue for the ESFP. This makes them want to learn more about this person, and almost instantly makes them more attractive. ESFPs really need someone who can keep things interested and knows how to take them on adventures. When anything becomes too stagnant the ESFP will become bored, and so they really need someone who can mix things up every once in a while. This doesn’t mean they need constant action, but the ESFP often enjoy a mix of comfort and excitement in their lives.