ISTP Flirting & Dating: How to Attract an ISTP 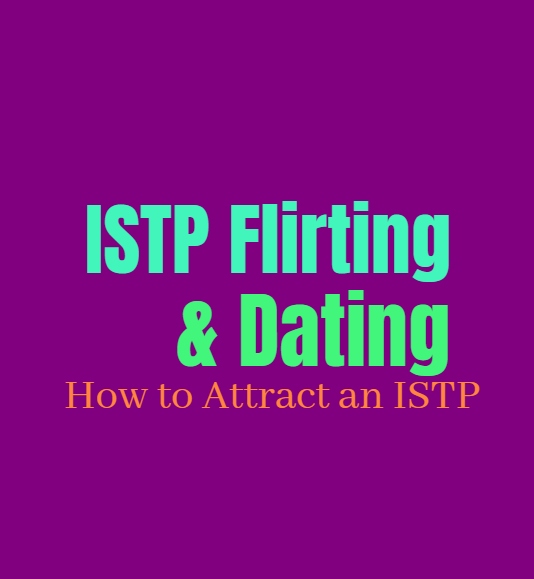 ISTP Flirting & Dating: How to Attract an ISTP

While ISTPs certainly do have a charming side, it isn’t always utilized by flirting. For them flirting can actually feel awkward, and they don’t always know how to best woo someone in these circumstances. ISTPs aren’t really connected to the emotions of others, and so they find it challenging to read their signals at times. They focus more on facts and information, as these are the things that can be proven and seen before their eyes. For the ISTP knowing how to flirt the way a person might specifically desire can become a bit frustrating and even confusing. While it might not come naturally for the ISTP, they are highly adaptable people, and so this can change for them over time.

The idea of flirting can seem a bit silly to the ISTP, but that doesn’t mean they don’t do it without fully realizing what they are doing. When the ISTP attempts to flirt it can be strained, and they might not really find ways of connecting, but when they simply go with the flow of the situation, it can come out much more charming and alluring. ISTPs are often more physical people and so touching and getting close is a good way for them to show their interest. They don’t tend to waste their time with someone unless they are truly interested in them, and so when they do initiate something, it often is a sign they want to get to know them better. ISTPs just don’t always enjoy the idea of playing cat-and-mouse games with someone, especially someone they truly like and want to get close to. The ISTP, who is flirting for the sake of showing their true desire to date someone, is going to come across as a bit more direct. They will likely express that they like this person by trying to understand them better and asking questions about what they like to do.

For the ISTP, though, the most obvious way they flirt is through body language. They are more in touch with their physical selves, so it is important to pay attention to their more physical behaviors when they are around someone. The ISTP is likely to get physically near that person, not really paying attention to anyone else around them, instead paying close attention to this one person.

In a relationship, the ISTP is often rather direct and honest with their partner, and so they value this in return. ISTPs need someone who will keep them interested and believe in always trying to grow and experience new things. They want a partner who is capable of mixing things up and keeping them on their toes a bit. They really do need space even when they are committed to someone, but they are more than happy to give this in return. They want to be supportive of their partner but also give them room to do their own thing and not feel pressure from the ISTP. They are very focused on the present moment and enjoy being free to explore new things. They just want a partner who allows their curiosity to roam free without feeling caged. This does not mean ISTPs cannot remain loyal. They just need someone who is willing to let them experience a bit of freedom to make their own choices and dive into new hobbies. ISTPs aren’t great at expressing their feelings and emotions, but that doesn’t mean they don’t feel things very deeply. For the ISTP, it just doesn’t come naturally to express these emotions, and so they often find more practical means of showing their loved ones that they care. The ISTP often use their problem-solving skills to help their partner find ways of overcoming their struggles and reaching their most intimate and important goals in life.

ISTPs often find the idea of casual dating to be a bit boring and even exhausting. They aren’t the most social people, and they become drained by constantly interacting with others. Having to meet new people constantly and try to work on getting to know them can be rather exhausting. The reason this drains the ISTP is that they might feel obligated to ask questions and engage with someone when they really don’t find them that interesting or exciting. They can be rather picky about who they get to know, and so for them, the idea of casual dating can force them into situations that really don’t entertain them at all. For the ISTP, it isn’t that everything needs to be about long-term connections, but having to get to know someone out of obligation feels extremely exhausting. They would much rather spend time with friends and romantic connections, which actually keep them interested and excited to learn more about them. When the ISTP really likes someone, the conversation and connection become easier to make, and they don’t feel quite as drained by it.

How to Attract the ISTP

ISTPs are attracted to people who are confident and comfortable with themselves. Someone who enters a room without constantly second-guessing themselves or needing to seek the approval of those around them. The confidence they see in others is often rather appealing for the ISTP, especially since it proves this person likely won’t be overly emotional or need constant validation. ISTPs care about their loved ones, but when someone is overly emotional and cannot seem to control these feelings, it can leave them feeling exhausted whenever they are around them. Someone who is confident and in control of themselves is going to be extremely alluring for the ISTP. They are also drawn to honesty and someone who is completely sincere about who they are and what they want. Being able to be completely upfront with others and unafraid to express their intentions is really attractive to the ISTP.