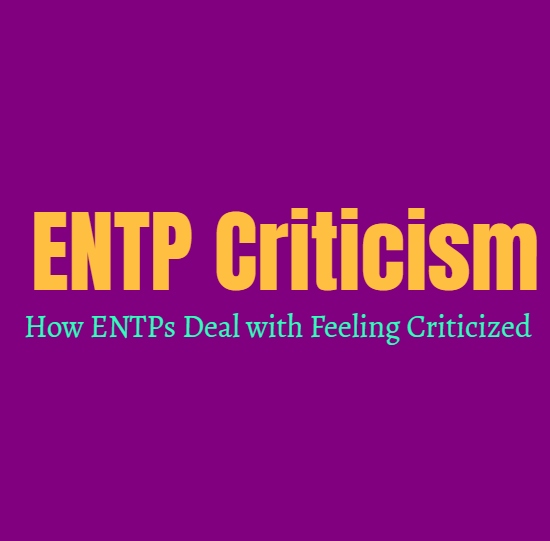 ENTPs often handle criticism differently depending on the situation and the specific criticism being delivered. For them it is situational and can change depending on the person delivering it, or what their intentions actually are. Like anyone else the ENTP can have sensitive areas or things which they struggle to really process criticism with. At the same time they like to be objective and logical people, and really do favor growth in their lives. They want to be able to improve themselves and so they will try their best to hear someone out and process if their criticism can be useful and help the ENTP to change and grow.

ENTPs do want to be able to take in criticism without being too bothered or offended by it, but this can take some time. If they can logically process what the other person is saying, and see it as constructive, then the ENTP is going to handle this much better. They want to be able to take in this information and analyze it, in hopes of judging whether or not there is some sort of validity to it. ENTPs do enjoy hearing other people’s viewpoints, especially if it helps them learn more about that person or about themselves. Sometimes criticism can be a useful tool in understanding others, and sometimes it helps the ENTP see things about themselves more clearly. They are not incapable of handling criticism, it often just depends on the specific situation and the intentions behind it. When they are approached by someone who is trying to be helpful and can use logical explanations, then the ENTP is going to be much more receptive to this. They enjoy absorbing information and want to be able to grow and improve, rather than remain stagnant. At first the ENTP is likely to push back a bit and might be defensive, since they can have rather firm beliefs and don’t really want to be wrong about most things.

ENTPs struggle with criticism when it is tied to something deeply personal, or when it seems to just be an attack on their personality. If someone comes out with some sort of criticism which targets something about the ENTP which seems to be part of who they are, it won’t much matter if it is intended as constructive. If it is something which is part of their character it can feel as if it isn’t something they can really fix or change. This ends up being more of a personal attack than anything else, and this can be unsettling for the ENTP. They might try to avoid being passive aggressive in response, but when they feel frustrated by the situation it can be hard to hold back. They want to be open to change and criticism, but when someone seems to be coming after their personality it becomes more difficult.

ENTPs also don’t appreciate criticism which seems to come without any evidence or useful tools. They would rather have people give them some sort of solutions, or any ideas which can point them in the direction of change. They especially become frustrated with criticism which is based purely on emotions, as it really won’t serve much of a useful purpose for them. This ends up being far too rooted in someone’s personal beliefs or morals, and makes it somewhat of an attack rather than actually being constructive. They want to be able to analyze this information and figure out if they should take it to heart, but when someone is being emotional it becomes frustrating and useless for the ENTP. They don’t naturally know how to analyze or respond to emotions most of the time, and so it can be a challenge especially when they are younger and haven’t developed their weaker functions further. They want to be able to take in what they are being told so that they can improve, but when it just feels like an insult or an emotional attack they can become defensive and annoyed.

For the ENTP the best approach is to take a step back when they are frustrated by the criticism. They need to approach it more logically, using their minds as a means of understanding where this person is coming from. If they can see the other angles and perspectives it can help the ENTP to judge the situation better. Of course this doesn’t mean they have to accept when someone is intentionally being hurtful, and in this case shouldn’t be receptive to such “criticism”. ENTPs do want to be able to grow and learn, and so sometimes constructive criticism can be truly helpful for them if they want to find ways to improve. It can help if they attempt to assess the situation without allowing the way another person expresses criticism to get to them as much. Simply analyzing the words and trying to see the other perspective, while also weighing this against their own inner knowledge and beliefs, can help the ENTP to gain a clearer sense of how to proceed. Time is often the best thing for the ENTP, as it gives them a chance to think things through and figure out who is right in this situation.