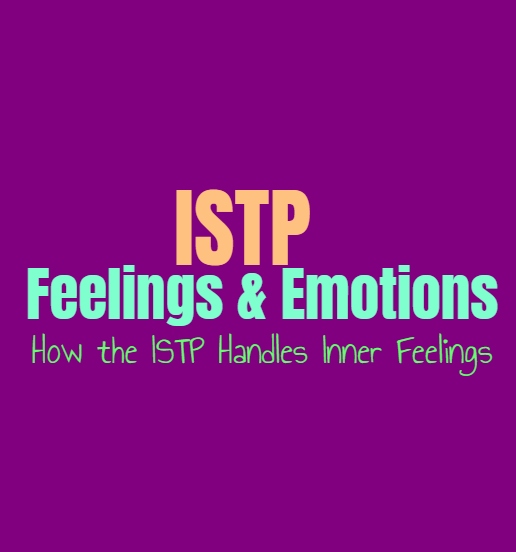 For the ISTP inner emotions and feelings can be a difficult process to fully understand. They are more naturally inclined to following logic and facts which are concrete. For the ISTP trusting in and relying on something which doesn’t have solid proof backing it up, can seem a bit confusing or even senseless. They value information and believe in always striving to learn and avoid ignorance when they can. When it comes to emotions ISTPs can have a hard time trusting them or even fully understanding them, this doesn’t mean they don’t feel and experiencing emotions on a personal level.

The reason the ISTP doesn’t focus as much on emotions, is because of their function stack. Their dominant function is introverted thinking, which focuses on logic and facts. They care about looking at the information in front of them and spending time analyzing it in order to learn and gain from this. For the ISTP facts are important and following a logical path is something they strive for. When it comes to emotions they come dead last in the ISTP stack, as their inferior Fe (extraverted feelings). This focuses on the emotions of others, but the ISTP can struggle to fully process this function the way a dominant Fe user would. For them it doesn’t make it easier to really comprehend the emotions of others, it only helps them connect with people and often makes them more charming people.

Being that their Fe is not often the strongest of their functions, the ISTP struggles even more when it comes to their own inner emotions. They don’t spend much time trying to sift through their feelings, instead they try to put logical reasoning to each emotion they experience. They filter these feelings through their Ti and spend time trying to come up with more rational steps towards solving their problems. They don’t like when a problem is based on emotions, since it becomes more difficult to really find solutions to these struggles. This doesn’t mean the ISTP does not care about feelings, they just don’t see concrete ways of understanding them or solving the negative feelings. This is why trusting in emotions seems like a bad choice for the ISTP, since they much prefer to following logic and factual information. They are also more drawn to things which are tangible, things they can see and physically connect with. When it comes to emotions the ISTP can feel at a loss, not fully knowing how to make full sense of them.

What people don’t realize about the ISTP is that they still feel things very deeply, often stronger than anyone knows. ISTPs just don’t know how to handle these emotions, struggling to find ways to process them. Instead of focusing on these feelings and using them to make choices, the ISTP instead tries to bury them and move towards more logical practices. They often experience things with a powerful sense of passion and emotion, even though on the outside they can seem cool and calculated. ISTPs just don’t want to focus on these feelings and allow them to control their choices. Sometimes this is also because they are fearful of these inner emotions, and are unsure how to handle what is going on inside of them.

The misconception that ISTPs are emotionless, is entirely harmful and untrue. ISTPs are not emotionless at all, which is why they enjoy living life to the fullest and want to seek out excitement and thrills in life. ISTPs experience emotions just like anyone else, maybe even more so because they spend so much time running from them. They feel these things deep inside, they just find other means of filtering those emotions and want to find ways to understand things from a completely logical point of view. Logic and reason comes naturally for the ISTP and so these are the things they strive to focus on in their lives, helping them reach goals and comprehend complex ideas and information.

They Live in the Present (But Not With Emotions)

ISTPs live very much in the present moment and often dive headfirst into experiences. They don’t like feeling restrained by doubt and enjoy being free to dive right in. For them life should be experiences and stagnancy is one of the most depressing things to go through. They want to feel a sense of freedom in their lives, and a willingness to try new things. For the ISTP living life to the fullest means being brave enough to take risks and jump in without fear of what might happen in the end.

This behavior does make the ISTP more prone to taking risks and living in the present, but not as much with emotions. When they start to experience a powerful emotion, much like falling in love, the ISTP often takes a step back. They don’t want to dive in when it comes to these feelings, and instead want to take time to analyze them slowly. They can become more fearful when it comes to emotions, which seems strange for the normally daring ISTP. It is often because these inner feelings are stronger than people realize, making it hard for them to process them and trust them completely. ISTPs often need to find ways to combine these inner emotions with their logical minds, but at the same time to allow themselves to give their feelings a chance to guide them once in a while. It might be frightening but in the end they can learn from these experiences just the same as they would if they were based on logic.