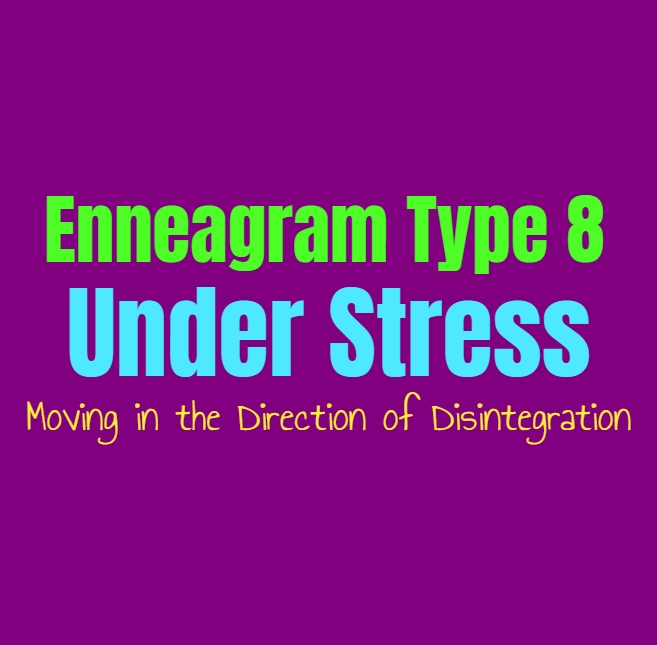 Eights care about being self-reliant and being capable of taking on challenges without failing. They have very strong will-powers and are capable of leading people with ease. People often follow eights because of their charm and natural way of leading. They also are driven by a desire to control their environment because they want to be able to care for and protect their loved ones. They recognize that in order to be able to prevent bad things from happening to those closest to them, they need to be strong-willed and persistent. This is another thing which drives them to maintain control, and to avoid allowing others to develop any sense of control over them. The idea of being trapped or controlled by someone or something else is very bothersome to the type 8, which is why they strive to be independent and handle things themselves. This causes them to be a bit skeptical of others, especially of authority, wanting to be able to make decisions on their own and count on themselves to get things done rather than relying on other people or establishments.

While they are ordinarily assertive people, the type 8 can become rather internalized and withdrawn when they are heading into disintegration mode. They become somewhat trapped inside of their own thoughts, wanting to analyze everything in order to keep from making mistakes. They can take on too many things at once and find themselves feeling stressed and overwhelmed by trying to handle it all alone. This sends them into disintegration, and can cause them to behave much differently than they normally do. They appear rather detached, even seeming high strung and unable to truly focus like they usually can. They no longer seem in tune with their own bodies and needs, instead they appear a bit scattered and on edge about most things. During this time they also behave much more brooding, trying to distance themselves from the outside world entirely. They withdraw into their minds, trying to analyze information and find a means of gathering as much data as possible. They might feel comforted by this at first, believing that if they analyze the information enough they can be sure to make the right choices instead of making mistakes. This might appear like a good idea at first, but this type of isolation isn’t good for the eight. They become disconnected from the outside world and can feel far too reclusive because of this. They behave more like an unhealthy version of the type 5, which causes them to detach from reality and what normally matters to them.

For the type 8 individual to avoid disintegration they need to become more aware of when they are taking on too much. The fact that they attempt to handle things on their own all of the time, is often the exact reason why they become overwhelmed in the first place. They take far too much on their own shoulders and can feel like it is impossible to handle all of these tasks within the time frame they need to be done. This is why it is important for them to take a step back when they are feeling drained and seem to be overwhelmed. Getting more in touch with their own personal feelings and needs is not easy, but it is important if they want to avoid disintegration and going into unhealthy habits. Instead of avoiding those internal struggles, they need to accept when it is time to take a break and cut themselves some slack. While trusting in others and delegating their work is difficult for the type 8, it is also an important step towards personal growth and becoming the best version of themselves they can be.