ENTP Soulmate & Best Match: How to Find Your Ideal Match 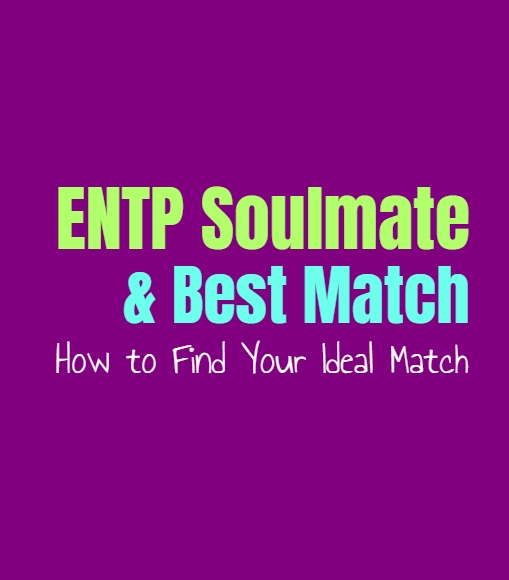 ENTP Soulmate & Best Match: How to Find Your Ideal Match

When it comes to believing in the idea of a soulmate, not everyone is quite so on board. Some people might feel more drawn to things which are logical and might feel like a soulmate just doesn’t fit into this description. For the ENTP it can be a struggle to really believe in something based on emotions or feelings. They prefer facts and logic, but that doesn’t mean they aren’t open-minded and don’t like exploring other options or new ideas.

What a Soulmate Means to Them

While some ENTPs might not believe in soulmates, there are others who are more open to the idea. When the ENTP does believe in soulmates they often tie more logical connections to what they believe. It is highly unlikely that they would define a soulmate as two people fated to be together, and that there is really only one perfect match in the world for them. For the ENTP this likely seems illogical and a bit overly emotional. That doesn’t mean they won’t have their own beliefs about what a soulmate truly is. The ENTP probably believes that it is possible to have more than one ideal match or soulmate in their lives. They don’t believe there is only one, but that doesn’t mean they don’t believe in love and finding a perfect match for them.

To the ENTP a soulmate is someone who challenges them and pushes them to be the best version of themselves. Someone who will inspire their passions and make them feel truly alive. They see a soulmate as a partner who stands by them even though they can see who they are beyond what they want to portray to others. This person can naturally understand them in ways no one else can, and is willing to dig even deeper to really feel a connection which is meaningful and complex. They don’t see a soulmate as someone who makes everything easy though, since ENTPs believe that their perfect match would be someone who challenges them in the right ways and helps them feel a sense of motivation and excitement for the future.

They Can Certainly Explore Possibilities

ENTPs enjoy being able to explore different possibilities, which is why they are more open to the idea of soulmates than people might think. While they are rather logical people, they also don’t like being locked down to things which have been proven. They enjoy being able to explore their options and often venture down different paths in order to uncover new things. ENTPs want to be capable of discovering something that others have not, instead of simply following proven methods to make their choices about things. They are often open-minded people who want to really look at things from different angles and so this does help them open up to the idea of having a soulmate themselves.

ENTPs can have more of a romantic side than people realize, especially when they find someone they care for deeply. ENTPs actually do have a connection to the emotions of others, they just prefer to focus more on logic and reason. When it comes to finding a soulmate the ENTP often have an inner desire to find someone who they can really share themselves with on a much deeper level. Finding someone who understands them is really very important to the ENTP, and they want to be open to it but it might be difficult for them. ENTPs to often put up walls and deflect, since they have a natural desire to focus on facts and not be vulnerable.

When It’s Okay to Settle

ENTPs don’t like staying in one place most of the time, and can be seen bouncing around. Sometimes the fact that they don’t want to settle and want to constantly keep moving, can be what holds them back from finding their true soulmate. The ENTP doesn’t need to change who they are, but that doesn’t mean they can’t be a little more open to the idea of settling when they’ve found the right person. They are intuitive people and so they sometimes need to trust their instincts when it comes to a person they feel a deep connection with. For the ENTP to really find their soulmate they need to start feeling more comfortable opening up. They might not enjoy being vulnerable but it is necessary when it comes to making a lasting bond with someone in the way they might be hoping to do.

ENTPs really need someone who challenges and inspires them in new ways. Not someone who makes them feel stagnant or like they are going to settle too much into their comfort zone. A partner who enjoy coming up with new ideas and keeping the ENTP on their toes, is really valuable to them. They really need someone who inspires their passions and helps them feel a sense of excitement about new things. A person who can keep up with their active minds and continue to go back and forth with ideas and stimulating conversation. Someone who inspires growth and motivation is really something which will make the ENTP happy.

ENTPs also need someone who can see past their guards and who is capable of being patient with them. Their partner should be capable of being vulnerable with the ENTP, but also not pushing them when they are clearly a bit drained. ENTPs can struggle with constant emotional expression and so they need someone who can sense when they just need to take a step back and breathe from time to time. Their soulmate is someone who is independent, but also wants to share themselves with the ENTP at the same time.