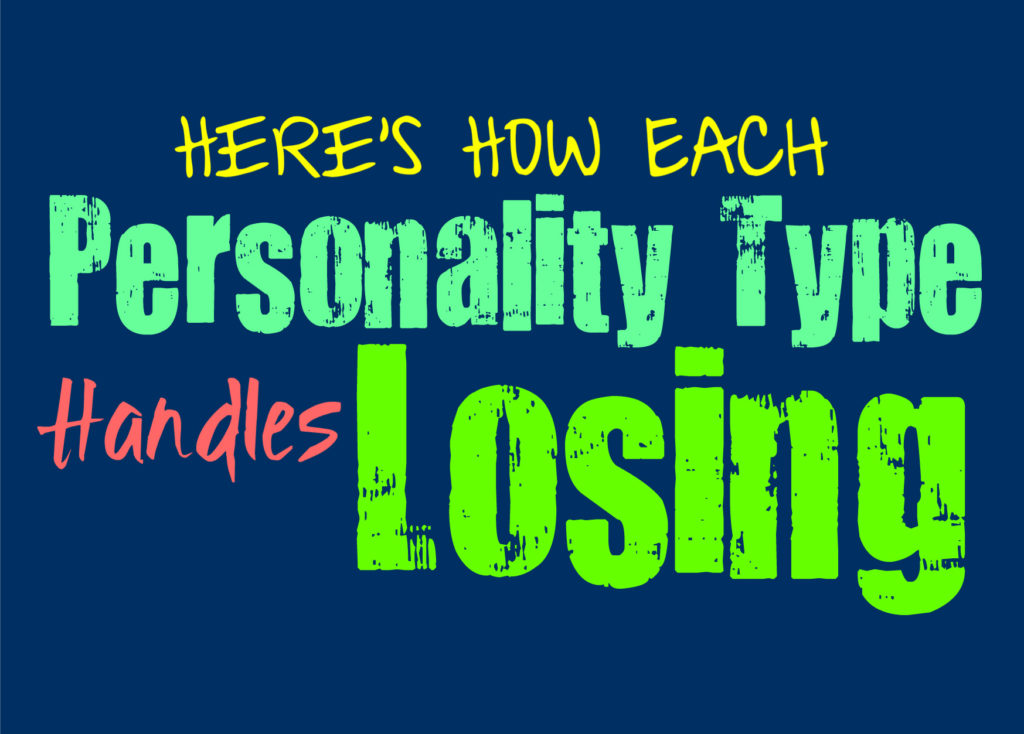 Some people are extremely poised when they lose at something, while others can be a bit obnoxious about it. Here is how each personality type handles losing.

INFJs often put a lot of pressure on themselves to do well, and this can make it hard for them to lose. They enjoy seeing other people succeed, so this isn’t often tied to competition with others. INFJs are always in competition with themselves, and will become upset and often very hard on themselves if they lose. This is something most INFJs need to work on, and can learn to get better with over time. They simply dislike feeling as though they have disappointed themselves or others, and push to reach some level of perfection. This pressure can cause the INFJ to become frustrated and upset when they lose, and will often attempt to push themselves harder next time. INFJs might need some time alone to process what happened, and will be fine after they have been able to recharge.

ENFJs often struggle with losing, since they have a perfectionist mentality. They prefer to always do their best, and push hard to achieve a certain standard. ENFJs can be extremely hard on themselves when they lose, and will become ashamed by their own failures. They put so much pressure on themselves to succeed and to achieve a certain level of perfection. They are constantly providing for others, and feel like they have failed those people if they do not perform perfectly. ENFJs try not to pout or show that they are disappointed when they lose, and will attempt to push through this.

INFPs are definitely not sore losers, and usually take their losses gracefully. They do not expect to win at everything, but they might see it as an opportunity to become better. They rarely compete with other people, and might dislike competitive situations. INFPs prefer to better themselves in a more inward way, rather than trying to impress others with their skills. They understand that losing is a part of life, and it is perfectly okay, as long as you lose gracefully. INFPs might become disappointed in themselves if they fail at something that is extremely important to them. They might need some time to regroup and find a way to push through their disappointment.

ENFPs can appear like they have a hard time with losing, since they do have a competitive side to their personality. They enjoy being the best at what they do, especially when it comes to things they are passionate about. ENFPs will often take a loss as a way to improve themselves and become even better.  They might make a joke about losing, but won’t openly be sore about their loss. ENFPs like being positive, but they might tease their opponent if that person did better than them. This is simply out of jest, especially since the ENFP can be self-deprecating at times.

INTJs definitely dislike losing, and will put of a lot of pressure on themselves to be successful at whatever they do. If they are in a competitive situation and do not do their absolute best, the INTJ will become frustrated with themselves. They will likely need time alone in order to recharge and analyze what caused them to lose. INTJs rarely lose at anything they set their minds to, so they do become a bit frustrated and upset when they actually do fail at something. INTJs will take the time to figure out what went wrong, and will work on ways to improve and become better. They are constantly looking to grow and learn, which makes INTJs excellent at picking themselves up after a loss. They just need a little time to recharge on their own, and they will quickly overcome it.

ENTJs definitely dislike losing, and will be very hard on themselves when they fail. They can be a bit competitive, and enjoy pushing themselves to improve. If the ENTJ does not do their best at something, they will take this very harshly. After some time spent recharging though, the ENTJ will analyze the situation and work on improving themselves and their skills. ENTJs see everything as a learning experience, and will not hesitate to push themselves even hard after a loss. The way ENTJs overcome any failures, is actually an extremely impressive thing.

INTPs definitely dislike losing, but this is only become they put a lot of pressure on themselves. They will not become frustrated with other people when they lose, but will simply need time alone to recharge. INTPs put a lot of pressure on themselves to be successful, and have a somewhat perfectionist mentality. INTPs do best if they take everything as a learning experience, and can gain some sort of value from their loss. When they can analyze the situation and learn to move forward from it, INTPs will do great at accepting their loss.

ENTPs are great at going with the flow, and will often find ways to overcome their losses. They certainly do not like losing though, and will push themselves even harder the next time. ENTPs have a way of jumping into new things head first, which makes them much less afraid of failure. They often realize that losing is just another way to learn from their experiences, and will take this as a way to improve in the future. They love any opportunity to grow and better themselves, and will often take each loss as a learning experience.

ISTJs definitely put a lot of pressure on themselves to be successful, but they realize they cannot be perfect. ISTJs will often need time to recharge and regroup after a major loss. They prefer to analyze the situation and do the proper research before participating in anything they could fail at. ISTJs are usually great at doing their best and getting things done, but have a hard time if they are tossed into a completely new situation blindly. After the ISTJ loses at something, they will likely find a way to improve and do better the next time.

ESTJs actually have a very hard time losing at anything, and want to be the very best. They can be extremely hard on themselves, and will push to do better next time. When the ESTJ loses, they can often become upset and frustrated and will need time to regroup. They dislike being upset over their loss, but often they cannot help it, even though they will try to bottle up their emotions. ESTJs will find a way to improve themselves, and will work hard to be even better the next time. After an ESTJ loses at something, it gives them inspiration to push themselves and they will often not allow this loss to happen again.

ISFJs are rarely sore losers, and will be perfectly accepting of small failures. They will become upset if they feel like losing has hurt or disappointed their loved ones in some way. ISFJs care very much about other people, which makes their motivation strongly rooted in their loved ones needs. ISFJs want to do their best for the people around them, and do not want to let them down in any way. If the ISFJ loses at a game or something small, they certainly won’t become upset by it at all. They might even make a self-deprecating joke in order to lighten to mood. If the ISFJ loses at something major that could affect their loved ones, they will become extremely hard on themselves.

ESFJs can be a bit competitive, especially since they want to impress their loved ones. ESFJs don’t mind losing to the people they care about, as long as those people do not rub it in their face. ESFJs can laugh it off, as long as they are not losing at something that they are personally passionate about. ESFJs want to be impressive to the people they care about, and will work hard to be skilled at just about everything. If they do poorly at something they might have a hard time entering into that task again.

ISTPs certainly do have a competitive streak, but that doesn’t mean they cannot handle losing. ISTPs are often respectful of others, and will be perfectly capable of handling a loss. They will likely take this as a learning experience, and will analyze and implement ways that they can improve in the future. ISTPs enjoy going with the flow, and dislike taking things too harshly. They realize that not everyone can be perfect, and do not attempt to push themselves to that level. They will definitely find ways to better themselves, but are not going to put ridiculous expectations on themselves.

ESTPs can put a lot of pressure on themselves to impress the people around them. They often dislike losing and might take this very harshly. ESTPs are constantly pushing themselves in their careers and their personal lives. They want to be the very best, and dislike feeling like someone else has done better than them. ESTPs enjoy being able to impress their loved ones, and want to be able to prove their hard work and efforts. When the ESTP loses at something, they might be a bit hard on themselves and will find a way to be better the next time,

ISFPs certainly do not mind losing, and prefer to go with the flow. They realize that no one can be perfect, and understand that they can’t be great at everything they do. They rarely like competition, and might find extremely competitive people to be very frustrating. ISFPs do not take themselves too seriously, and will not feel the need to be perfect at everything they do. They want to take life as it comes, and prefer to remain positive instead of constantly pushing themselves.

ESFPs do not mind losing, especially when it comes to smaller things like games and fun activities. If the ESFP is extremely passionate at something though, they will not want to lose. They will often push themselves to be the very best at this one thing, and do not want to fail at it. ESFPs prefer to take life as it comes though, and do not want to get caught up on being perfect. They strive to be positive and learn from their mistakes, which makes them fun and laid back people to be around. The only times that ESFPs have a hard time with losing, is when their loved ones make them feel guilty about it.