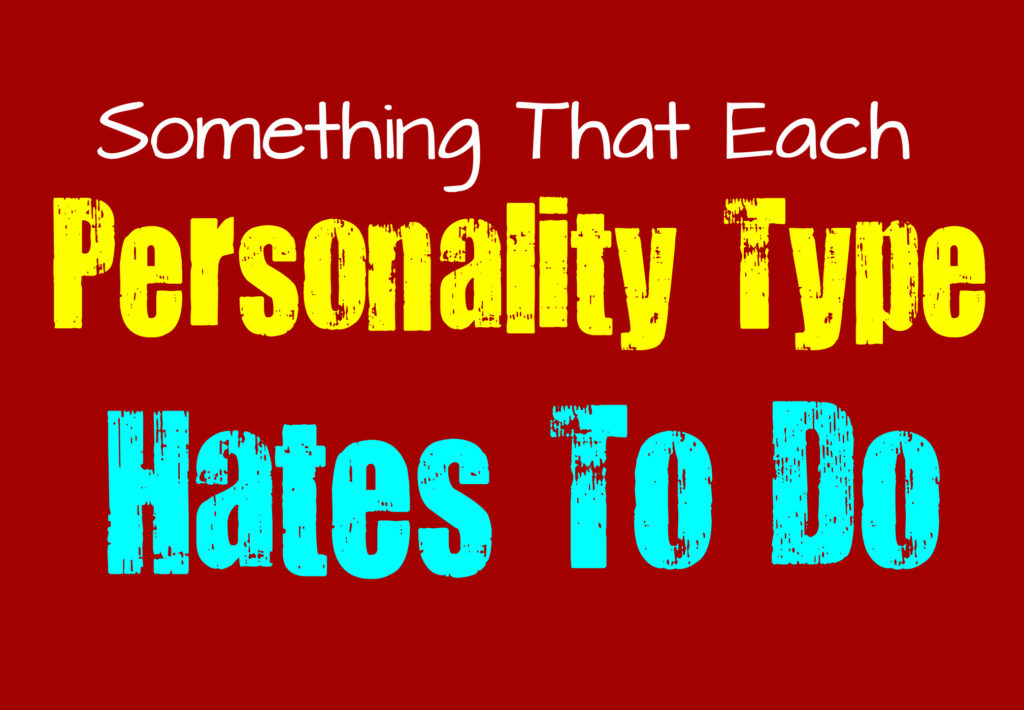 There are certain things that we avoid at all costs, things that we truly hate to do. Unfortunately, there are times when we have to perform the tasks that we despise- simply because life calls for it. Here is something that each personality absolutely hates to do.

INFJs are certainly a unique collection of people, and because of this they do have a long list of things that get on their nerves. INFJs absolutely hate being forced into a loud situation, or being made to participate in a large crowd event. INFJs prefer quiet interactions, where they can actually get to know people and communicate with others. If they have to endure loud noises and abrasive people for too long, they will become exhausted. INFJs also despise having to be forced into participating in small talk, there are little things more tiresome to them than this. They would much rather have real and meaningful conversation, small talk is possible one of the worst things for the INFJ. Having to be around fake or insincere people, is also something that INFJs hate.

ENFJs are very people focused, which often means that the things they despise are connected to the actions of others. ENFJs are constantly working hard to please their loved ones, so something they hate more than anything is being forced to be around people they do not trust. If the ENFJ has to spend time with disloyal people, it can truly exhaust them quickly. They only want to be around sincere and caring individuals- and hate wasting their time without people who do not fit this description. ENFJs simply despise betrayal, and will become very upset if their friends will not believe them when they explain that someone is not a good person. If they have to pretend at all, the ENFJ will be very unhappy.

INFPs truly hate being forced into social situations, especially with loud or insincere people. If the INFP has to encounter individuals who they believe are attention hogs, it becomes extremely exhausting for them. There are few things worse for an INFP than being forced into a job or career that they deem pointless or heartless. INFPs want to be doing something more valuable and meaningful with their time, and will quickly become frustrated and unhappy. There is really noting that the INFP hates more than being forced into a lifestyle that is not their own choice or design. Sincerity is so important to the INFP, and living a life that doesn’t follow this will truly make them miserable.

ENFPs truly hate having to perform monotonous tasks, the same thing over and over to them is just misery. ENFPs wants to work in a job that inspires them, and makes them feel truly accomplished. They enjoy doing things that showcase their natural skills, and might even impress others. If they have to work in a factory line, or sit at a desk all day- the ENFP will hate this very much. ENFPs hate being stifled as well, and if they are not allowed to feel free to explore new possibilities, they will become rather unhappy.

INTJs truly hate having to perform certain required tasks, such as going to the DMV. If they feel like inefficiency is wasting their time, they will become very frustrated. They understand that these things have to be done, but they often can think of a million ways to improve upon the situation. INTJs often hate having to follow certain social constructs, like gift giving or receiving. They might find these ideas meaningless, and would much rather come up with helpful ways to show appreciation. INTJs want things to be done in a well thought out way, but having to participate in something that seems pointless and lazy- that is truly going to be something that the INTJ hates. They can also become angry if they have to work in a group, and are forced to do this.

There is nothing ENTJs hate more than laziness and inefficiency. If the ENTJ is forced to participate in something that is not put together well, they will certainly despise this. They might attempt to take charge, but if that is not possible they will find themselves very frustrated. Having to be fake in a situation in order to get something done, is certainly something that the ENTJ hates immensely. They believe in getting things done, so they ENTJ will bite their tongue if they must- but oftentimes this leaves them feeling very angry and frustrated.

INTPs actually care very much about their loved ones, but this can be a real hot button for them at times. Feeling like they have to enter into a social situation because it is the “appropriate” thing to do, is truly something that the INTP hates. They dislike having this sort of pressure placed on them, especially since they often prefer being alone. They hate walking into a situation where people pre-judge them before getting to know who they are, which also makes the INTP hate feeling like they have to prove this person wrong. INTPs will truly despise having to perform monotonous tasks, or fit into a job where they do not belong.

ENTPs truly hating having to perform monotonous tasks, so working on some sort of assembly line is something like a scene from a horror film to them. ENTPs thrive when they are in a career that allows them to explore new possibilities and showcase their skills. If the ENTP has to perform the same boring task over and over again, they will become extremely frustrated. ENTPs also hate feeling like they have to bite their tongue in order to make their loved ones happy. ENTPs love being able to debate subjects, and utilize this is a way to learn from and teach others. Being made to keep quiet for the sake of comfort, is not something that ENTPs enjoy.

ISTJs often hate being forced outside of their comfort zone without some sort of practical instructions. They are not afraid of trying something new, as long as they are able to research it beforehand. ISTJs always want to work hard and grow in their career, but dislike being tossed into an unknown situation. They need to be allowed to fully understand a subject or task, before they are forced to dive in. ISTJs are often great at pretty much anything they do, but they require time to study and learn beforehand.

ESTJs often hate being forced to comfort someone emotionally, especially if this person is distraught. They care deeply about their loved ones, but dislike feeling like they can’t really do anything to help. If someone does not have a practical solution to their problem, the ESTJ will feel somewhat lost. Being tossed into a situation like this, is certainly something that the ESTJ hates very much. They want to be able to help, but if they feel like they cannot do this it will frustrate them. ESTJs also despise being made to follow orders from someone who they feel is unintelligent. They also hate being thrown into situations where the people running the place are completely inefficient. Waiting in long lines is something that enrages the ESTJ, since they likely have more important things to do.

ISFJs truly hate having to step too far outside of their comfort zone. They enjoy being able to perform the tasks that they are used to and enjoy. It is not that ISFJs are afraid to take chances, they just know what works well for them. They have often experienced that stepping outside this comfort zone, ends badly for themselves and their loved ones. ISFJs often want a quiet lifestyle, just enjoying time spent with their loved ones and doing the things they love. If someone forces them to try something new or make a decision and it ends badly, the ISFJ will be very upset by this.

ESFJs hate having to do something that feels selfish, especially if it makes their loved ones unhappy. If the ESFJ has to make a decision between the people they care about, it will be extremely frustrating for them. They dislike taking sides, especially between people they care deeply for. Anything that might hurt someone they love, is something the ESFJ will avoid at all costs. They also hate being put on the spot, especially if they feel like they won’t perform well in that situation. ESFJs also hate having to answer questions about themselves, or talk about themselves for very long periods of time.

ISTPs truly hate being forced to follow the rules, especially if they disagree with these rules. They want to be able to do as they please, without having other people’s ideals forced upon them. ISTPs are very independent individuals, making it important for them to follow their own path. Unfortunately, there are times when the law forced the ISTP to follow certain rules or laws that they disagree with. Having to do this, is entirely frustrated for them, and they may even attempt to find a way around it. They also hate being forced into social situations for too long a period of time.

If the ESTP has to perform boring or monotonous tasks all day, they will soon become miserable. ESTPs need to feel free to explore and partake in exciting adventures. If they feel like their job is holding them back and isn’t showcasing their abilities, the ESTP will truly hate this. ESTPs also hate being alone for too long, and will feel stifled in a job or lifestyle where they cannot be around people that they like or care for.

ISFPs truly hate being forced into loud social situations for too long. They enjoy being alone, and really hate having to be in these types of overwhelming surroundings. ISFPs also hate feeling like they have to spend time around people they do not trust or like. If someone is uncaring or inconsiderate, the ISFP will want to be as far away from this person as possible. If they have to work with or spend time around people who are immoral or selfish- the ISFP will certainly hate this.

ESFPs hate being ignored more than anything in the world. If they are forced into a secluded situation for too long, the ESFP will become very unhappy. Not being able to enjoy the company of others, or make people smile- is the ESFPs worst possible scenario. Having to work in a career where the ESFP spends a lot of time by themselves, performing boring or monotonous tasks, is something that the ESFP will truly hate to do.